Months after ending an Obama-era program to protect young undocumented people from deportation, President Donald Trump on Sunday continued to make explicit what he has told undocumented immigrants repeatedly since announcing his presidential aspirations in 2015: You are not welcome here.

Border Patrol Agents are not allowed to properly do their job at the Border because of ridiculous liberal (Democrat) laws like Catch & Release. Getting more dangerous. “Caravans” coming. Republicans must go to Nuclear Option to pass tough laws NOW. NO MORE DACA DEAL!

Mexico is doing very little, if not NOTHING, at stopping people from flowing into Mexico through their Southern Border, and then into the U.S. They laugh at our dumb immigration laws. They must stop the big drug and people flows, or I will stop their cash cow, NAFTA. NEED WALL!

These big flows of people are all trying to take advantage of DACA. They want in on the act!

DACA applicants must have entered the United States before their 16th birthday and continuously resided in the country since June 15, 2007, on top of other requirements.

The Trump administration has also intervened against a handful of DACA fixes that otherwise had bipartisan support, to the frustration of Democratic lawmakers and even some Republicans.

All the while, the Justice Department has also continued to fight in court for Trump’s right to terminate the program. The Supreme Court in February denied the government’s attempt to leapfrog the Ninth Circuit Court of Appeals with an appeal of a lower court’s injunction.

The so-called “catch and release” policy refers to undocumented immigrants being released from the government’s custody while awaiting court dates. While serving as secretary of the Department of Homeland Security last year, John Kelly said “We have ended dangerous catch-and-release enforcement policies.”

But as Reuters pointed out at the time, it’s not so simple: Various court rulings govern how long undocumented immigrants can be held in the government’s custody. Also, there simply aren’t enough beds in the nation’s immigration detention centers to house every undocumented immigrant facing potential deportation. 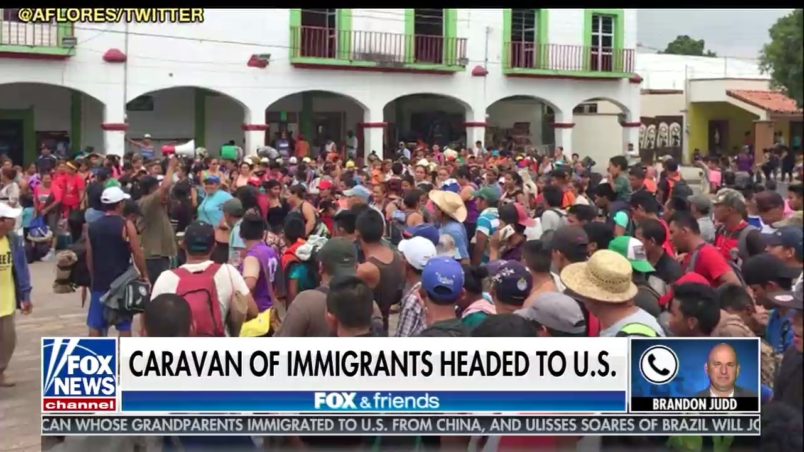 That border patrol union made the unprecedented decision to endorse Trump, without a union-wide vote, during the Republican presidential primaries. Judd later served on Trump’s transition team.

Judd and the “Fox & Friends Sunday” crew discussed a “caravan” of Central American migrants and asylum seekers — as reported by BuzzFeed’s Adolfo Flores — organized by the group Pueblos Sin Fronteras. The caravan is making its way through Mexico, toward the United States’ border, hoping, according to Flores, that it finds safety in numbers during a journey known for legal impediments and dangerous gangs

Before Trump used the term “nuclear option” Sunday, Judd did, referring to a potential Senate procedure to eliminate the legislative filibuster and allow legislation with a simple majority of support avoid minority obstruction.

“They can go the nuclear option, just like what they did on the confirmation,” Judd said, referring to when the Republican Senate majority nuked the filibuster for Supreme Court nominees before Justice Neil Gorsuch’s confirmation vote.