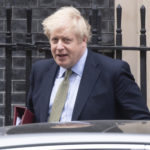 By Cristina Cabrera
|
March 5, 2020 3:46 p.m.
EDITORS' NOTE: TPM is making our COVID-19 coverage free to all readers during this national health crisis. If you’d like to support TPM's reporters, editors and staff, the best way to do so is to become a member.

Sen. Lindsey Graham (R-SC) encouraged President Donald Trump to say things about a fatal respiratory virus that are actually based on science instead of a “hunch.”

On Thursday, reporters asked Graham for his response to Trump’s efforts to minimize the World Health Organization’s (WHO) estimated 3.4% death rate of reported COVID-19 cases worldwide.

“I listen to the scientists when it comes to the numbers,” Graham said. “And I would encourage the President, if he’s going to report things, to make sure the science is behind what he’s saying.”

Trump had appeared on Fox News host Sean Hannity’s program the night before, during which the President asserted that the 3.4% figure “is really a false number.”

Graham says he "would encourage" Trump to make sure his comments about the coronavirus are backed up by science. pic.twitter.com/YoBOklJISd