Fringe right-wing national security commentator Sebastian Gorka is not only peddling election fraud falsehoods nowadays but also … food fit for a “patriot” to prep for the End Times.

During an interview on his conservative talk radio show, “America First with Sebastian Gorka” on Monday featuring J.D. Vance — the “Hillbilly Elegy” author and Ohio Senate candidate who recently plead for forgiveness from former President Trump for criticizing him in 2016 — Gorka is seen advertising a product called “My Patriot Supply,” which provides weeks-long supplies of emergency food. 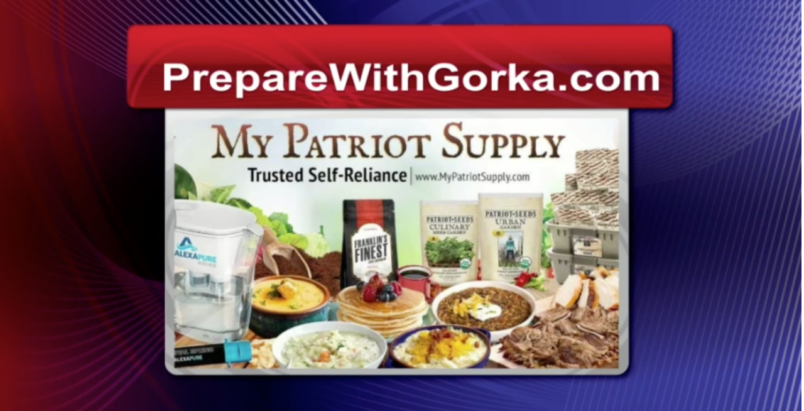 “My Patriot Supply” was actually founded in 2008 and appears to have enlisted Gorka as one of its major spokespeople. The company offers a “limited-time” discount for those who click on the link PrepareWithGorka.com.

The company advertises itself as a product that speaks to “every person’s patriotic duty to achieve true independence from our world’s increasingly unstable system.”

“The widespread civil unrest and power grid failures in America today is proof that the future is more uncertain than ever before,” My Patriot Supply’s website reads. “Everything from food supply chains to basic public safety are now becoming unpredictable and concerning.”

This isn’t the first time Gorka has hawked questionable products.

Gorka is seen in a TV ad aired in 2019 shilling fish oil pills that he claims cured his back pain.

“Sebastian Gorka here for Relief Factor,” he says in the ad. “First of all, let me say I have never before endorsed a pain reliever, but when Pete and Seth Tablott, the father-and-son owners of Relief Factor, asked me to endorse their 100 percent drug-free product, I absolutely couldn’t say no.”

Suffer From Debilitating Back Pain? So Does Seb Gorka, According to His New Gig as Spokesman For Fish Oil Pills https://t.co/RGAN8epxTa

Gorka left the Trump administration in August 2017 after his history of Islamophobic rhetoric and thin credentials as a counterterrorism expert solicited calls for his ouster. Gorka insisted at the time that he had resigned from the White House. He was a frequent face for the administration’s immigration and national security policy.

Since departing the White House, Gorka has mostly made headlines for his incendiary news commentary, which include saying that “Black Africans” in Chicago were “murdering each other by the bushel” and that Democrats “want to take your pickup truck, they want to rebuild your home, they want to take away your hamburgers.”

Gorka himself managed to stay in good graces with then-President Trump after leaving the White House. In 2019, Trump cheered on Gorka for getting into a shouting match with Playboy reporter Brian Karem after Trump held a press conference in the White House’s Rose Garden.

Summer Concepcion is a newswriter for TPM based in New York. She previously covered the 2016 election for Fusion, conducted investigative research for The Nation Institute, and has written for NBC Chicago and the Chicago Reader.
Have a tip? Send it Here!
includes:
Sebastian Gorka
Latest News
Comments are now Members-Only