27 mins ago ago
Report: DeSantis’ Ex-Staffers Have Their Own Support Group

1 hour ago ago
After Once Defending Cheney, Graham Now Abandons Her: Insists GOP ‘Can’t Grow’ Without Trump

‘Out Of Whack’: The Most Jaw-Dropping Remarks From Trump’s Puerto Rico Trip

Was he sending his best?

President Donald Trump on Tuesday visited Puerto Rico, nearly two weeks after Hurricane Maria made landfall on the island and destroyed much of its critical infrastructure.

From attacking the mayor of San Juan to lashing out at the media to making pointed remarks about Puerto Rico’s “broken infrastructure & massive debt,” Trump has produced a series of jaw-dropping sound bites in the days and hours leading up to his trip.

On his way out of the White House on Tuesday, Trump incorrectly claimed that roads on Puerto Rico have been cleared and congratulated himself on doing what he dubiously claimed was “a great job.”

Then he called on residents of the hurricane-pummeled island — many of whom lack electricity, access to water and sewage treatment after a Category 4 storm hit nearly two weeks ago — to give the federal government a hand.

“We need their truck drivers,” Trump said. “Their drivers have to start driving trucks. We have to do that, so at a local level they have to give us more help.”

A U.S. labor union told CNN on Saturday that the island is facing not only a shortage of diesel fuel, a necessity for powering the trucks, but also a possible shortage of the vehicles themselves.

“It is unclear if there are trucks available to move the containers, fuel to operate the trucks or road access to the distribution centers,” the Teamsters union said.

When he landed on the island, Trump informed Puerto Ricans that the federal relief effort to rebuild their shattered infrastructure is coming out of government coffers.

“I hate to tell you, Puerto Rico, but you’ve thrown our budget a little out of whack, because we spent a lot of money on Puerto Rico, and that’s fine,” Trump said.

He then compared Hurricane Maria to Katrina, which he called a “real catastrophe.”

He compared the number of fatalities after each storm, though the present death toll on Puerto Rico is not final, and Puerto Rico Gov. Ricardo Rosselló said before Trump’s arrival that he expected the count to rise.

Then, during a tour of the devastation, he told survivors to “have a good time.”

“Great to see you,” Trump added.

During a later appearance where he handed out supplies, the President “tossed rolls of paper towels into the crowd,” according to a White House pool report. 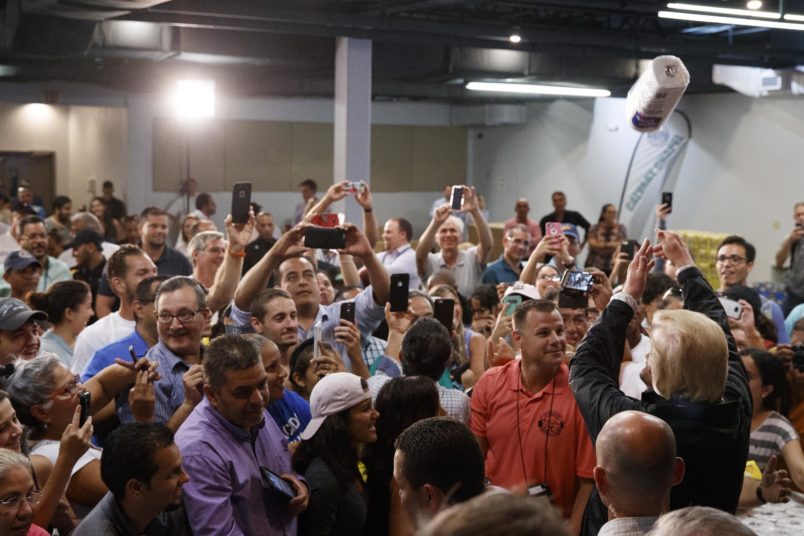 Trump later claimed that “most of the hospitals” on Puerto Rico were open. He said “the job that’s been done” on the island “is really nothing short of a miracle.”

As of Friday, of Puerto Rico’s 69 hospitals, only one was fully operational, according to FEMA.

“Flashlights,” Trump said to the crowd, handing out the items at an aid center. “You don’t need them anymore!”

As of Monday, Reuters reported, the U.S. Energy Department said about 5.4 percent of customers had power restored.

Before heading to Puerto Rico on Tuesday, Trump laid the groundwork for his visit by attacking San Juan Mayor Carmen Yulín Cruz on Twitter for criticizing his administration’s characterization of relief efforts as “a good news story.”

In response, Trump on Saturday accused Cruz of “poor leadership ability” and attacked her and “others in Puerto Rico” he claimed “want everything to be done for them.”

“The Mayor of San Juan, who was very complimentary only a few days ago, has now been told by the Democrats that you must be nasty to Trump,” he tweeted.

Asked on Monday which other leaders Trump was referring to, White House press secretary Sarah Huckabee Sanders said she had not “talked to him specifically” about who the President was attacking.