President Trump, in his attempts to meddle with the Russia probe, was at least partially motivated by the fear that investigators might uncover conduct that Trump himself believed could be perceived as criminal, special counsel Robert Mueller said in his redacted report.

Mueller’s assessment undercuts efforts by Attorney General Bill Barr, in defending his decision to clear Trump of obstruction, to emphasize the lack of an underlying crime of collusion with Russia for Trump to cover up.

It also suggests that Mueller had found evidence of a corrupt intent in at least some of the episodes he investigated as part of his obstruction inquiry. Intent is a key question in determining whether certain conduct fits into the legal framework of an obstruction offense.

“Obstruction of justice can be motivated by a desire to protect noncriminal personal interests, to protect against investigations where underlying criminal liability falls into a gray area, or to avoid personal embarrassment,” Mueller said. “The injury to the integrity of the justice system is the same regardless of whether a person committed an underlying wrong.”

Mueller acknowledged that his investigation had “not establish[ed] that the president was involved in an underlying crime related to Russian election interference” — a phrase Barr took out of context to explain his own decision not to deem Trump’s conduct as criminal.

Mueller, however, determined that “the evidence does point to a range of other possible personal motives animating the President’s conduct.”

One of Trump’s concerns, Mueller said, was that the investigation was casting doubt on the legitimacy of Trump’s election.

But, according to Mueller, there was “potential uncertainty about whether certain events-such as advance notice of WikiLeaks’s release of hacked information or the June 9, 2016 meeting between senior campaign officials and Russians could be seen as criminal activity by the President, his campaign, or his family.”

Mueller discussed theses other motives in his analyses of several of the obstruction-related episodes in investigated.  When it came to Trump’s attempts to get rid of the special counsel himself, “[s]ubstantial evidence indicates” those efforts were “linked” to Mueller’s oversight of probes that “involved the President’s conduct,” the report said.

There was also “[s]ubstantial evidence” that Trump’s request that then-Attorney General Jeff Sessions announce that the probe would be narrowed to just future election meddling was “intended to prevent further investigative scrutiny of the President’s and his campaign’s conduct.”

Even before Mueller was appointed, when Trump was contemplating and then eventually fired FBI Director James Comey, there is “evidence” that “indicate[s]” that “a thorough FBI investigation would uncover facts about the campaign and the President personally that the President could have understood to be crimes,” the report said. That motive was in addition to Trump’s frustration that Comey wouldn’t publicly announce that he was not under investigation — a perception that the President thought was hindering his ability to govern.

In assessing the motive for the Comey firing, Mueller said that a “thorough FBI investigation” would expose the work Michael Cohen had done on the Trump Tower project in Moscow throughout 2016, even as Trump repeatedly denied he had any connection to Russia. In a semi-redacted sentence, Mueller also seemed to point to an additional motive for firing Comey: Trump’s awareness that he had privately sought information about the Wikileaks’ email dumps during the campaign even after it was publicly reported that Russia was behind the hacks. 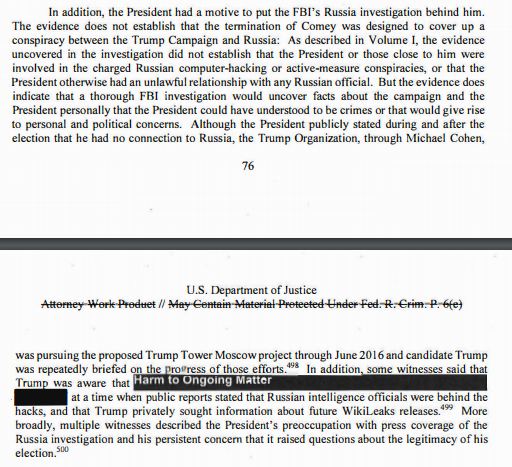 According to Mueller’s report, the perceived criminal liabilities of the 2016 Trump Tower meeting — where his inner circle met with Kremlin-tied individuals — also may have motivated some of Trump’s allegedly obstructive conduct. Mueller raised that concern specifically when discussing Trump attempts in the summer of 2017 to convince Attorney General Jeff Sessions to unrecuse himself from the Russian probe and his efforts to install a new attorney general who could oversee the probe.

Mueller pointed to the public release of the emails disclosing the Trump Tower meeting that directly preceded many of Trump’s actions and how it was “evident that the investigation into the campaign now included the President’s son, son-in-law, and former campaign manager.” Mueller specifically cited comments Trump made about wanting an attorney general like Eric Holder or Bobby Kennedy, who, in his mind, took greater lengths than Sessions to protect their presidents.

“A reasonable inference from those statements and the President’s actions is that the President believed that an unrecused Attorney General would play a protective role and could shield the President from the ongoing Russia investigation,” Mueller said.

Finally, there was Trump’s desire to protect himself from the obstruction inquiry that may have motivated him to further meddle in it, Mueller said. Trump ramped up his efforts to fire the special counsel after the first public reports of an obstruction inquiry, Mueller noted, and that fear also may have driven his request that Sessions publicly announce that he was narrowing the probe to only future election interference.

“The sequence of those events raises an inference that after seeking to terminate the Special Counsel, the President sought to exclude his and his campaign’s conduct from the investigation’s scope,” Mueller said.