3 hours ago
Koch Network Has A New Plan For 2024: Any (Republican) Candidate But Trump

Reports: Trump Met With Possible Flake Challengers While In Phoenix

Before he gave his rally speech, Trump spoke with Arizona state Treasurer Jeff DeWitt and former state GOP chairman Robert Graham, according to sources familiar with the meeting who spoke with Politico and CNN. Both are considering a primary run against Flake, who is up for re-election in 2018.

Rep. Trent Franks (R-AZ) and Graham’s 13-year-old daughter, who posted a photo of the huddle on Instagram, were also present at the meeting, CNN reported. 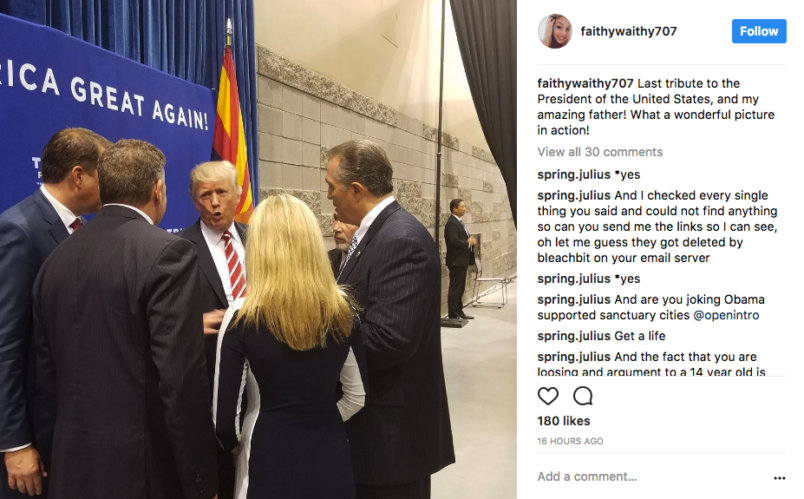 Sources told Politico and CNN that the meeting was focused on getting rid of Flake, who Trump referred to as “the flake.”

The President has been lashing out against Flake publicly for about a week. Last Thursday, Trump tweeted praise of former Arizona state Sen. Kelli Ward (R), who’s also considering a run against Flake. He called Flake “toxic” and “weak on borders, crime and a non-factor in the Senate.”

Great to see that Dr. Kelli Ward is running against Flake Jeff Flake, who is WEAK on borders, crime and a non-factor in Senate. He's toxic!

He tweeted again Wednesday morning, saying he is “not a fan” of Flake.

Phoenix crowd last night was amazing – a packed house. I love the Great State of Arizona. Not a fan of Jeff Flake, weak on crime & border!

The criticism comes after Flake spent several weeks appearing on cable news shows, discussing his new book “Conscience of a Conservative” and calling out his party for embracing Trump and abandoning traditional conservative values.