The network’s star host Tucker Carlson sounded maudlin as he announced that the network was calling Virginia’s gubernatorial race for Democratic candidate Virginia Lt. Gov. Ralph Northam (D), breaking the news without any of his usual abrasive bombast.

“We’ve got breaking news here. Okay. We are now reporting that Ralph Northam has won the Virginia governor’s race,” Carlson said. “Ralph Northam, the Democrat, beating Ed Gillespie. With 58 percent in, we are projecting that he is the winner tonight.”

Harrowing, bracing moment when Tucker Carlson shapeshifted into an actual sad trombone and was forced to declare Northam the winner. pic.twitter.com/LmzsBB7RYT

Fox News host Sean Hannity promised to cover election results on his show, but ultimately did so for all of six seconds.

Tonight on #Hannity we will cover President Trump’s speech in South Korea and election results with @SebGorka, @AmbJohnBolton, @peterschweizer, @MonicaCrowley, @GreggJarrett and more

“Let’s talk about those results in Virginia, New Jersey, New York, by the way,” Hannity said, listing states that Democrats won, and added for the network’s most prominent viewer, “Not states Donald Trump won.”

Hannity doesn't appear to be planning to cover the Virginia election at all. This was it. It lasted 6 seconds. pic.twitter.com/AnpvcicXMT

Hannity then dropped the subject for the rest of his show.

Clinton was not running for office on Tuesday, and has said she is “done with being a candidate.”

the segment lasts 4 minutes, max. we go to commercial break. that's it.

Shannon Bream, host of “Fox News Tonight,” similarly managed to bring up the firm behind the so-called Trump dossier that alleges ties between Trump’s campaign and Russia, a document which played no part in Tuesday’s elections.

On Wednesday morning, the network continued its myopic focus on anything but the previous day’s elections.

Fox News has nothing on Virginia this morning, instead they are replaying election night 2016 highlights.

As of Wednesday afternoon, Fox News’ homepage had just two references to the previous day’s elections, both relegated to the page’s periphery. 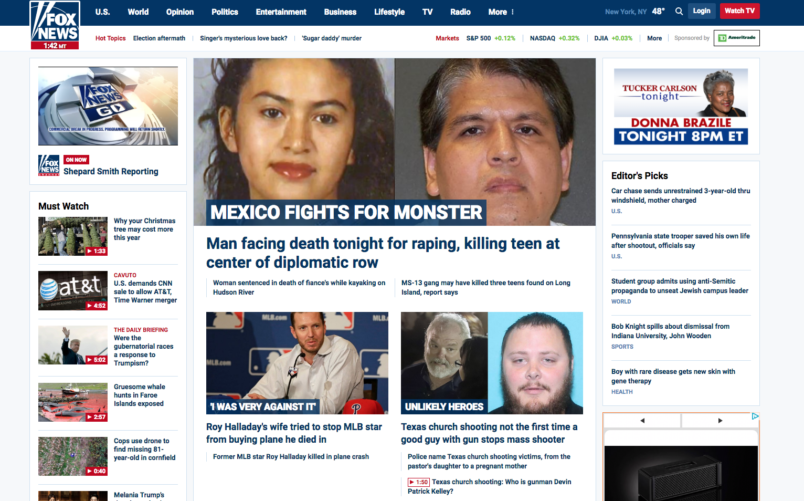 On top of it all, the cable network ran a chyron about Gillespie’s loss that was strikingly similar to President Donald Trump’s criticism of the candidate’s strategy.

CNN vs. Fox: A tale of two chyrons pic.twitter.com/GOxfbBE18n