11 hours ago
DC Mayor: Trump’s ‘Divisive’ Tweets ‘Harken To Segregationist Past’ Of The Country

The Growth of COVID19 Testing

Good news has been hard to come by in the COVID19 Crisis. But testing capacity across the country did appear to grow substantially over the last week. Here is daily COVID19 tests across the country along with a 7 day moving average. 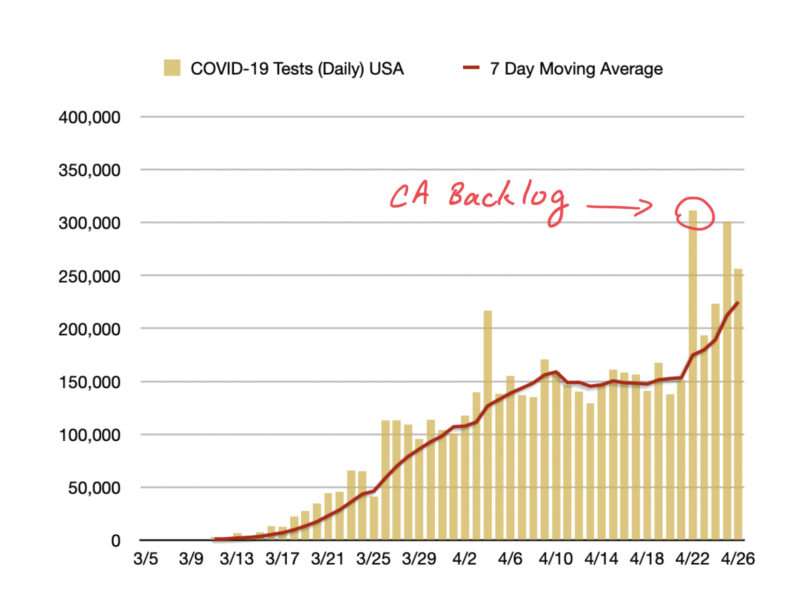 The first big spike on April 22nd was mainly California reporting a backlog of tests. (This fact was included in the daily reporting notes from the COVID Tracking Project, which is the source of the data for all these charts.) So that’s a reporting artifact rather than a ‘real’ change. But the four succeeding days’ reports have been broad-based and thus appear to catch a real trend. Today’s number was down from yesterday’s – perhaps because of a weekend lag. But it was still 100,000 tests more than what had been a plateaued daily average at around 150,000 since early April.

The rise in testing sheds some light on another story we’ve been following: the trend in new cases in Wisconsin and whether those can be attributed to the in-person election the state held on April 7th.

As we’ve noted earlier, the trend through early this week seemed to broadly align with a jump in new cases starting about a week after the election. That has continued and actually escalated over the course of this week. But as you can see in the graphs below the growth in cases at least broadly coincides with the growth in testing. That’s somewhat clear in the middle weeks of the month and then even more clear this week. This rise in testing in Wisconsin also aligns with the rise nationwide. So is the seeming spike in Wisconsin just an echo of increased testing?

That definitely seems possible. Indeed, some of it seems very likely to be driven by more testing. What we don’t know is whether the rise in testing was driven by greater testing capacity or more seriously ill people showing up in emergency rooms. The last graph here at least suggests the latter possibility plays a role. The last chart is the percentage of positive tests each day. That stays pretty constant throughout at around 10%.