First Take: The ‘Nunes Memo’ Is Even Weaker Than Expected

Having given the Nunes Memo an initial but close read, here’s my take. The memo seems to tell us no more than what’s been reported in various sources for months and even on the most basic read seems obviously misleading on its face. Here’s why.

Let me try to summarize the core argument of the memo more or less on its own terms. The memo argues that the Steele Dossier was a critical or central part of the government’s (i.e., the FBI’s) argument for obtaining a FISA warrant on Carter Page. In none of its applications or follow up applications (four total) did the FBI disclose to the FISA court that the Steele Dossier was essentially the fruit of the poisoned tree – ultimately funded by Democratic party funds, an inherently political document and only corroborated in its findings to a limited degree. That’s the gist of the memo: the FBI used a tainted and unreliable source to get a warrant for surveillance on an American citizen without disclosing to the court any of the reasons not to credit the information contained in the dossier.

The key hinge in the memo is that it consistently seeks to suggest that the Dossier was the heart of the government’s case or even the entirety of the government’s case without actually providing any evidence for this claim or – critically – describing any other evidence the government may have had or may have included in the application. I see two key places in the memo where they make this case. On page 2 the memo states the dossier was “an essential part” of the government application. On the bottom of page 3, the memo says: “Deputy Director McCabe testified before the Committee in December 2017 that no surveillance warrant would have been sought from the FISC without the Steele dossier information.”

The latter quote is simply a characterization of what McCabe said. His actual quote would be critical to judging its significance. Even on its face, it doesn’t clearly mean there wasn’t other probative evidence. The earlier claim is simply a claim – that it was an essential part of the application. In short, the memo provides no real evidence that the Dossier was central to the application or how the government got the information. It also conspicuously refused to discuss or address what other evidence the government provided. Lots of reporting suggests there was significant additional evidence in the application. That squares with what we know about how FISA applications work and which ones get approved.

The one exception comes in the last paragraph of the memo where it says that the application also mentioned evidence about George Papadopoulos and his activities. “But,” say the memo authors, “there is no evidence of any cooperation or conspiracy between Page and Papadopoulos.”

Again, we don’t know the totality of evidence in the application. But if you’re providing evidence to suspect that a presidential campaign advisor is acting as the agent of a foreign power, it certainly seems relevant and probative to note evidence that one of his fellow advisors (one of five) also seems to be working with or for that foreign power, even if you don’t have evidence that the two advisors are working together. This strikes me as really obvious. Again, we can’t evaluate the application without knowing all the evidence contained in it. But the criticism here seems pretty weak.

Along the way, through the memo, there’s various trash talk about the memo or other players in the case. It claims that a September 2016 Mike Isikoff article was contained in the application as corroboration for the Dossier, even though it was based on the Dossier. I don’t know whether that’s true or not. And even the memo itself suggests that the FBI may not have known it was true at the time of the application.

Through the couple weeks, this memo has been a source of controversy, critics of the document have argued that the memo shouldn’t be released without releasing the underlying materials it was based on. This seems like a pretty clear way of saying that it’s highly misleading without knowing what other evidence the FBI had on Page. Again, really obvious. What we have here is a memo going to town on the Dossier in ways that seems significantly misleading but not altogether inaccurate and making that the heart of not only the Page FISA application but the whole Russia probe while conspicuously refusing to discuss the other evidence it contained. Even the most basic read makes this obvious.

Here’s the text of the Memo itself. The limited annotations are ones I made myself in the course of reading.

A few stray points to note:

2) At the risk of stating the obvious, the Memo is entirely and exclusively about Carter Page, not the broader investigation.

3) Note on page 3 the quote that Steele was “desperate” for Trump not to be elected. From what we know of Steele this quote was likely a characterization of what he found and his belief that Trump had been compromised by Russia. The Memo provides this quote without context to create the impression that Steele was a political opponent. We can’t know for certain without context. But there’s good reason to believe this is another cherry-picked quote for a specifically misleading purpose. 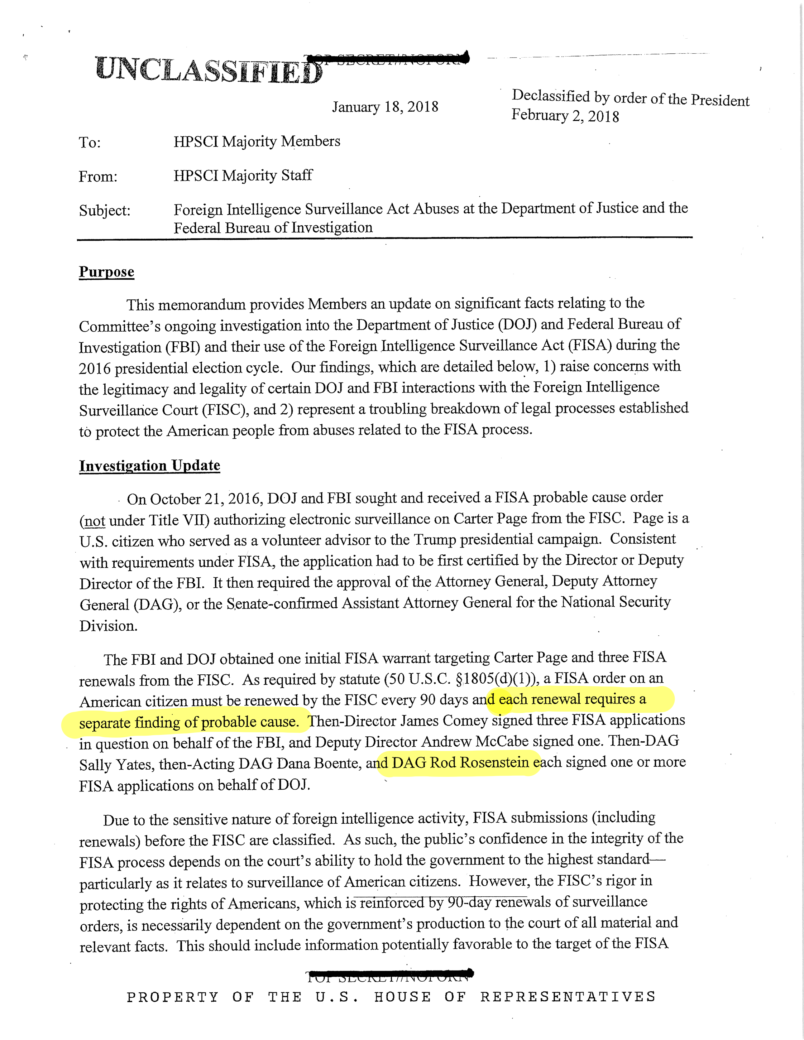 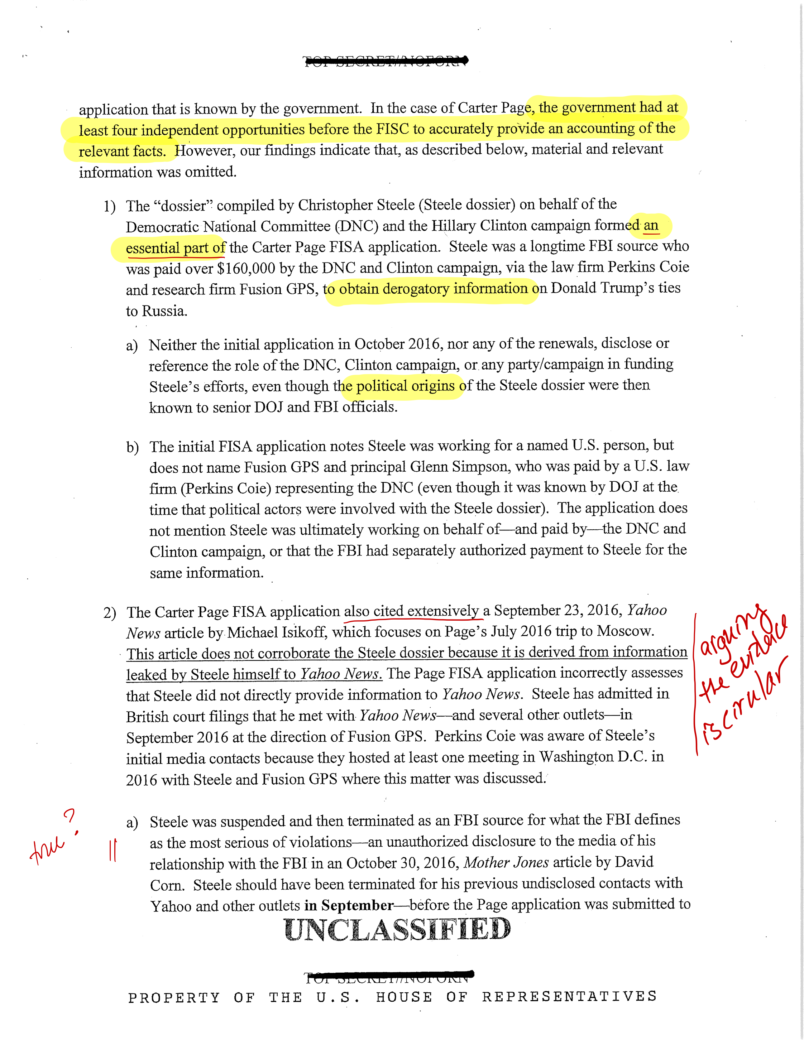 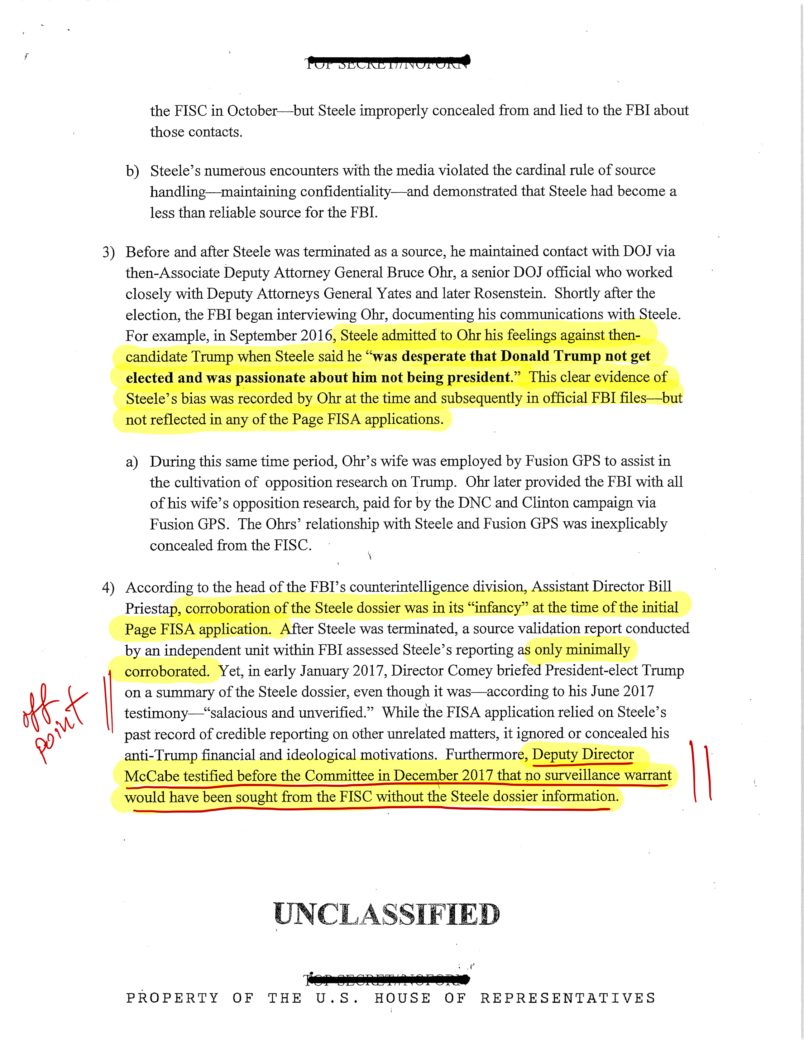 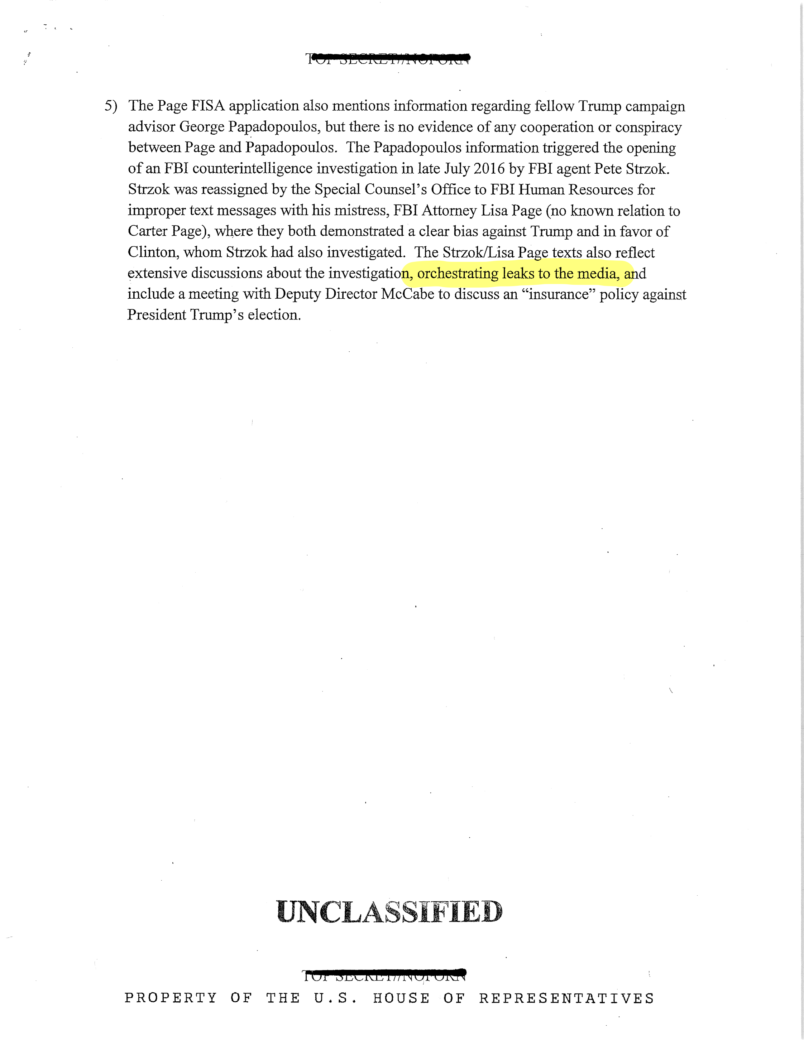