6 hours ago
Manchin Opposes Dems’ Call To Expand SCOTUS Even If Party Wins Back WH, Senate

How much can President Trump get away with blaming his predecessor for Russia’s targeted interference in the 2016 election?

That seems to be what the Trump campaign is trying to find out with the “Official Obama-Russia Accountability” survey it blasted out on Thursday.

The “survey” – really just a mechanism for gathering voters’ contact information – promises that the President will “personally review” the responses of those who provide their answers (plus their names, emails and cell numbers).

But the framing is pretty rich.

In the Trump campaign’s telling, the “Waste of Money Mueller Report” proved that “Cheatin’ Obama” intentionally declined to prevent Russia’s interference in the 2016 presidential contest. 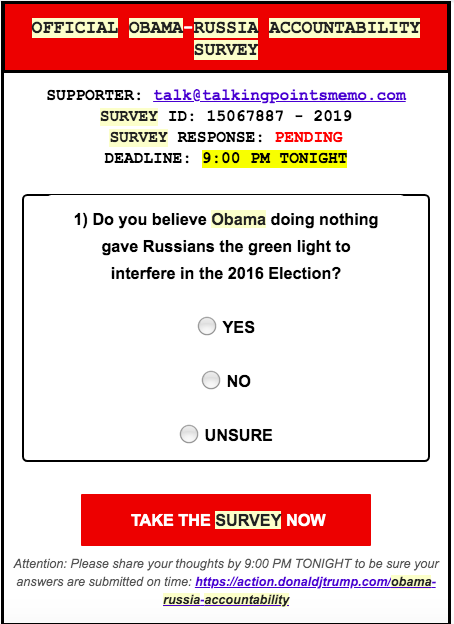 Trump has, since 2017, blamed Obama for failing to properly safeguard against Russian interference, while also lashing out at Obama-era Justice Department and FBI officials for launching a “witch hunt” investigation into that subject.

Senior Obama administration officials say they didn’t go public with their intelligence about Russia’s meddling in the fall of 2016 because they feared appearing to put their thumbs on the scale for Hillary Clinton.

As special counsel Robert Mueller’s report made clear, Russia intervened specifically to benefit Trump, and the Trump campaign “expected it would benefit electorally from information stolen and released through Russian efforts.”