8 hours ago ago
‘This Is F*cked Up’: Milley Got Pissed At Trump For Dragging Him Into Church Photo-Op

12 hours ago ago
Jan. 6 Panel Reacts To Milley Reveals: We’re Investigating It All

President Donald Trump, who constantly rants about “leakers” and warns his Twitter followers to be wary of anonymous sources, on Tuesday morning retweeted a Fox News report that cited anonymous intelligence community officials. 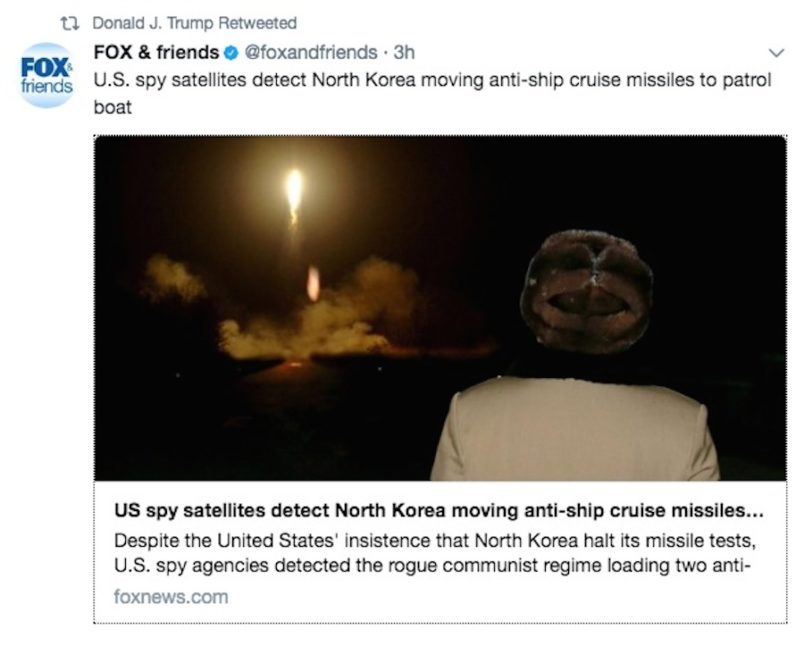 The report promoted by the “Fox and Friends” Twitter account cited unnamed U.S. officials with knowledge of intelligence in North Korea who said that spy agencies detected North Korea loading missiles onto a patrol boat.

“I can’t talk about anything that’s classified. And if that’s in the newspaper, that’s a shame,” Haley said.

After retweeting the report, Trump published his own tweet about addressing North Korea’s potential nuclear capabilities.

After many years of failure,countries are coming together to finally address the dangers posed by North Korea. We must be tough & decisive!

Caitlin Mac Neal (@caitlinmacneal)  is TPM's special projects editor, based in Washington, D.C. She first came to TPM as a newswriter, and has written for HuffPost, the Sunlight Foundation and Slate.
Have a tip? Send it Here!
Latest Livewire
Comments are now Members-Only