4 hours ago
The 87,000 Armed IRS Agents Conspiracy Theory Is Just The Latest Republican Assault On An Agency In Crisis

“Put big game trophy decision on hold until such time as I review all conservation facts,” he tweeted. “Under study for years. Will update soon with Secretary Zinke. Thank you!”

“President Trump and I have talked and both believe that conservation and healthy herds are critical,” he said. “As a result, in a manner compliant with all applicable laws, rules, and regulations, the issuing of permits is being put on hold as the decision is being reviewed.”

The decision was met with overwhelming backlash, with both liberals and conservatives slamming the move as needlessly cruel and inhumane. The notorious photos of the President’s sons posing with a dead leopard and a dismembered tail of a elephant from their hunting expeditions didn’t help.

According to the Service, it can allow such imports “only when the killing of the animal will enhance the survival of the species.” African elephants are protected as an endangered species under the Endangered Species Act, and critics questioned the Interior Department’s defense that allowing hunters to kill more of them would enhance their survival.

On Saturday, Trump seemed to enjoy the positive response to his announcement, re-tweeting Piers Morgan and Greta Van Susteren thanking him for his decision. 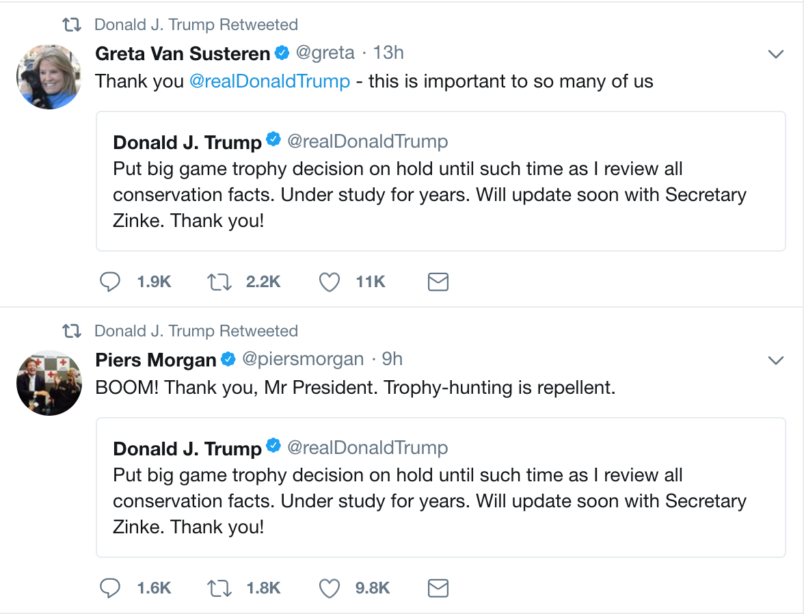 Cristina Cabrera (@crismcabrera)  is a newswriter at TPM based in New York. She previously worked for Vocativ, USA Today and NY1 News.
Have a tip? Send it Here!
Dear Reader,
BECOME A MEMBER
BECOME A MEMBER