President Donald Trump on Monday accused former FBI Director James Comey of illegally leaking classified information to the media, going on the defensive amid reports that during the 2016 campaign his son Donald Trump Jr. met with a Kremlin-connected lawyer who promised him damaging information on Hillary Clinton.

“That is so illegal!” the President tweeted.

James Comey leaked CLASSIFIED INFORMATION to the media. That is so illegal!

He also retweeted a “Fox and Friends” interview with former House Oversight Committee chairman Jason Chaffetz (R-UT) about his attempts to acquire Comey’s personal memos about his conversations with Trump. 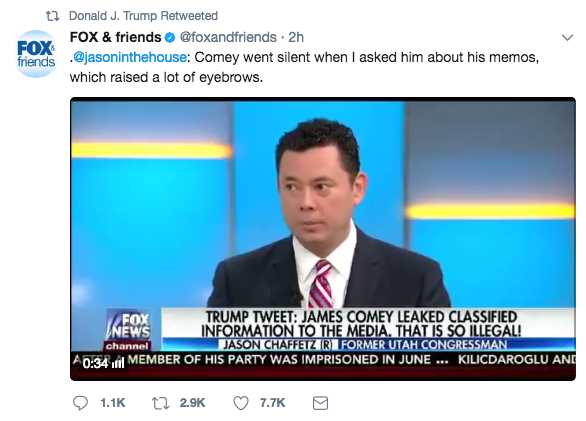 In the interview, Chaffetz said Comey “got silent” when he asked the former FBI director for the location of the memos.

“He said he wouldn’t talk about it, he wouldn’t tell me where they were,” Chaffetz said. “And it really raised a lot of eyebrows as I went back and talked to the staff and other members and said, look, he’s not going to give this up easily. We’re going to have to fight.”

Trump took aim at Comey, who went public about his documentation of their conversations after the President abruptly fired him in May, amid reports that his eldest son Trump Jr. met with Russian attorney Natalia Veselnitskaya in June 2016 after she promised him compromising information on Clinton.