3 hours ago ago
Kinzinger Says GOPers Who Join Nativist Caucus Should Be Stripped Of Committees
19 hours ago ago
ICYMI: Your TPM Weekend News Roundup

Fox News’ Shepard Smith took six minutes out of his show Tuesday to debunk what has become Republicans’ attack du jour against Hillary Clinton and the Obama administration: “Uranium One.”

The narrative — on which the White House, Republican elected officials and conservative media have leaned in recent weeks to deflect from increasing scrutiny on Russian meddling in the 2016 election — is based on the faulty charge that Clinton sold influence, via donations to the Clinton Foundation, to Russian energy interests carrying out a deal that required her approval.

Smith began debunking the attack by showing a clip of Donald Trump on the campaign trail.

“Hillary Clinton’s State Department approved the transfer of 20 percent of America’s uranium holdings to Russia while nine investors in the deal funneled $145 million to the Clinton Foundation,” then-candidate Trump read from a teleprompter.

Smith responded: “That statement is inaccurate in a number of ways. First, the Clinton State Department had no power to veto or approve that transaction. It could do neither.”

Smith picked apart the statement: The deal was evaluated by the nine-member Committee on Foreign Investment, for one, and it seems Clinton herself wasn’t personally involved in that evaluation. And besides, the committee had no power to veto the deal, only former President Obama could.

Smith went on, dismantling point-by-point an attack that originated in the Government Accountability Institute — which was co-founded by Steve Bannon and funded by the Mercer family and the Koch brothers — before making its way into mainstream media outlets, including the New York Times.

“The accusation is predicated on the charge that Secretary Clinton approved the sale,” Smith concluded. “She did not. A committee of nine evaluated the sale. The President approved the sale. The Nuclear Regulatory Commission and others had to offer permits, and none of the uranium was exported for use by the U.S. to Russia. That is Uranium One.”

It was an unusual, if refreshing, oasis of level-headed explanation amid a network line-up full of conspiracy. Just six hours later, Sean Hannity had a decidedly different take on the story, flow chart and all: 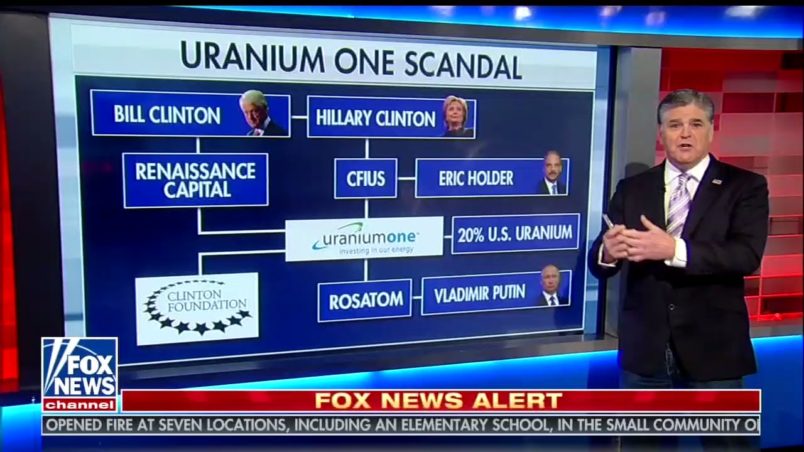