15 hours ago
It’s A Mystery What The FBI Wanted At Mar-a-Lago, But Trump Knows

CNN and Business Insider’s Natasha Bertrand reported that the suspension came as a result of a tweet in which Clarke promised to punch the “LYING LIB MEDIA […] in the nose & MAKE THEM TASTE THEIR OWN BLOOD.”

“Nothing gets a bully like LYING LIB MEDIA’S attention better than to give them a taste of their own blood,” he wrote above a photoshopped image showing him in a wrestling ring, kicking the CNN logo as President Donald Trump holds “CNN” in place. 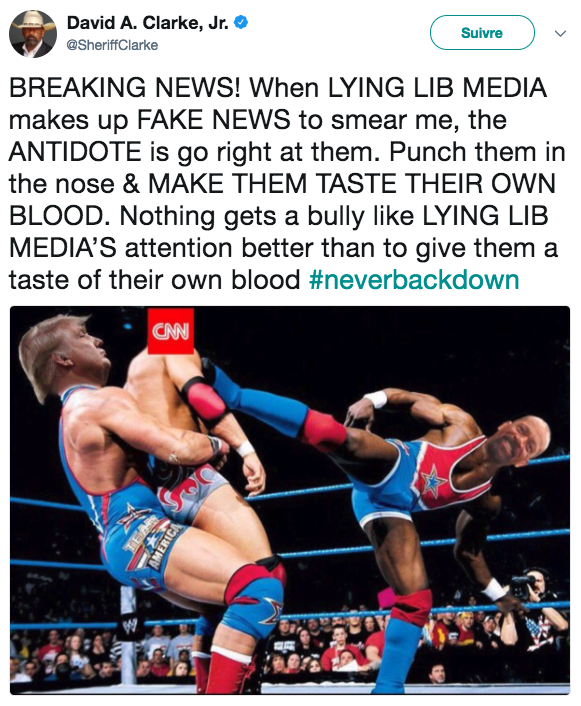 That tweet has since been deleted. CNN reported the suspension was also the result of two other tweets, also since deleted, though a number of posts referring to violence are still available on Clarke’s page.

I am UNINTIMIDATED by lib media attempts to smear and discredit me with their FAKE NEWS reports designed to silence me. I will continue to poke them in the eye with a sharp stick and bitch slap these scum bags til they get it. I have been attacked by better people than them #MAGA pic.twitter.com/XtZW5PdU2b

LYING LIB MEDIA can’t beat me with a coherent counter argument so they resort to what liberals do when they have no logical narrative. They try to silence me by creating FAKE NEWS from LIES to smear me like they did yesterday. I don’t back down, I punch back. Bring it scum bags pic.twitter.com/rpyHCb0659

Clarke’s anger was triggered by new reporting that the FBI had sought a warrant to search a Gmail account belonging to him, in order to investigate whether he had used his office to improperly detain a man who had shaken his head at Clarke on a plane.

In response to the stories about the warrant, Clark told reporters that federal prosecutors ultimately decided not to pursue charges against him. But Dan Black, the man who shook his head on the plane, has also sued Clarke. That suit is still pending.

Clarke is best known for the brutal conditions in his facilities — he resigned as sheriff on Aug. 31 — and for his outspoken support for Donald Trump’s presidential bid. He’d claimed over the summer last year to have been offered a position at the Department of Homeland Security, but DHS denied having offered Clarke a job and a spokesperson for the then-sheriff eventually said that Clarke had “rescinded his acceptance of the agency’s offer to join DHS as an assistant secretary.”