48 mins ago
Most Republicans Vote That Impeachment Trial Is Unconstitutional, Signaling Likely Acquittal

Maybe It Is Extortion

One of the theories circulating about Jeffrey Epstein makes a certain logical sense on its face and yet, in practice – as something that really could be case as opposed to merely possible – it just seems too far-fetched. It goes like this. Running a procurement ring can’t make you billions or even hundreds of millions of dollars. Even an extortion ring couldn’t really put together those numbers. But maybe it worked something like this. Epstein does have some kind of money management fund. Maybe it’s not very successful. Maybe it’s just invested in an index fund or treasury bonds. But what if Epstein has the goods on a bunch of high rollers and for Epstein to stay silent they invest in his fund?

At least logically speaking, it works. It explains why no one can find anyone who invests in Epstein’s fund. It also explains why Epstein doesn’t seem to have the organizational footprint you would need to manage such a fund and perhaps why his trades would haven’t shown up on anyone’s radar.

As I said, the moving parts seem to fit together logically. But it’s simply too fantastical and cinematic to really be true. Indeed, as we noted yesterday, it seems clear that there’s just not a lot of evidence Epstein is as wealthy as the myth he’s woven around himself suggests. So maybe the fantastical scale of riches doesn’t have to be explained at all.

But Michelle Celarier reports in New York Magazine that a lot of real hedge funders in New York seem to think this was what was happening. Of course, perhaps they’re just speculating on the base of the false or at least unsupported premise that Epstein is fantastically wealthy. But Celarier flags something else which seems far more probative. Virginia Roberts Giuffre, one of Epstein’s accusers, said Epstein did pretty much just this in a 2015 affidavit.

If the blackmail theory sounds far-fetched, it’s worth keeping in mind that it was also floated by one of Epstein’s victims, Virginia Roberts Giuffre. “Epstein … also got girls for Epstein’s friends and acquaintances. Epstein specifically told me that the reason for him doing this was so that they would ‘owe him,’ they would ‘be in his pocket,’ and he would ‘have something on them,’” she said in a court affidavit, according to the investigative series in the Miami Herald that brought the case back to the public’s attention late last year.

In the 2015 filing, Giuffre claimed that Epstein “debriefed her” after she was forced into sexual encounters so that he could possess “intimate and potentially embarrassing information” to blackmail friends into parking their money with him. She also said photographic and video evidence existed — an assertion that looms especially large now that federal investigators have found a trove of images in Epstein’s home safe.

How credible this claim is I don’t know. Ghislaine Maxwell, Epstein’s one-time girlfriend and alleged procurer/recruiter has made all sorts of claims about Guiffre’s lack of credibility in her own legal battle with Guiffre. Guiffre has also claimed that she had sex with Prince Andrew and Alan Dershowitz at Epstein’s and Maxwell’s behest. Both these men deny the claim.

This 2001 photo is of Prince Andrew, Guiffre age 17 (then Roberts) and Maxwell. 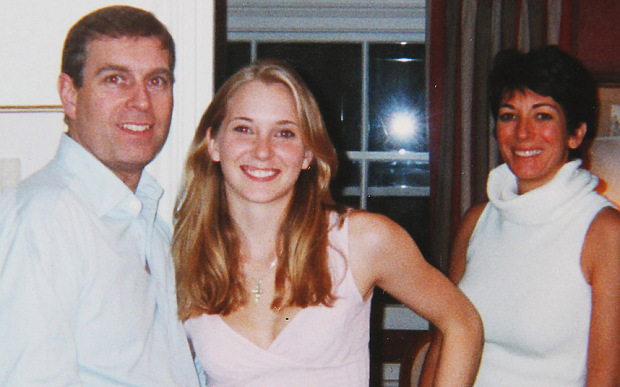 The specific claims about gathering compromising information and debriefing the underaged girls recruited for Epstein and others we have to treat as unverified. But it is at least is a credible claim by someone in a position to know that some sort of organized blackmail – hard or soft – was part of Epstein’s MO – not just speculation by people trying to figure out what his racket was.

If Epstein’s wealth isn’t quite as fantastical as he wanted people to believe then there’s less to explain. Some good chunk of his wealth seems to have come from or been seeded through his Epstein’s relationship to clothing magnate Leslie Wexner. So maybe this method of coopting and compromising the extremely wealthy was part of Epstein’s MO but isn’t required to explain some fantastical level of wealth.