A Note on TPM, Its Past and its Future

This counts as house news. So it’s nothing you have any reason to be concerned about as you would about the news. But if the future and livelihood of this site is important to you, it’s actually a big deal. We are now creeping up on a major milestone: 25,000 subscribers. We’re currently at 24,944. So we have a pretty good shot at getting there by the end of the month. (Our goal is to end the calendar year with no fewer than 30,000 subscribers.) So the first thing is, thanks. Really, thank you to all of our subscribers.

This isn’t just a nice thing on the side. It’s core to the site’s continued existence and vitality. We started Prime at the end of 2012 for a number of reasons. But a key one, really the key one, was that we believed the advertising-only digital publishing model was unsustainable, not just for us but for everyone. As a small player with no resources to fall back on, however, we knew we’d feel the storm early and hard. This, I’ve always thought, is one of the benefits of being a small player. Everyone has to grapple with the same industry trends. But being big allows you to go on longer thinking the trends won’t apply to you. Scale and easy access to capital can facilitate denial. 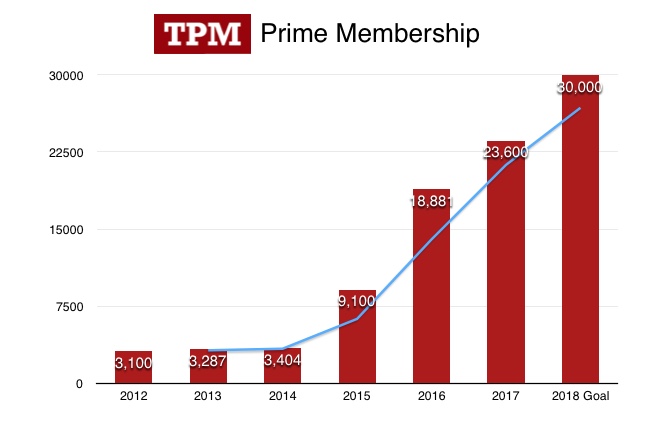 As you can see from this chart, we quickly signed up about 3,000 core users (our “launch subscribers” – thank you, launch subscribers!) and that held steady for the next two years. As we learned with a few bruises in those first years, we didn’t really have the technical capacity or the concept fully worked out at first. So the initial iteration of Prime was limited and we didn’t push it that aggressively. We began building Prime out in earnest in 2015 and that has been a central organizational priority ever since. As you can see if you’re a regular reader, we’ve entered a new phase of Prime since the beginning of this calendar year, introducing various new Prime-only editorial features. That will continue.

When the storm finally hit in 2016 and 2017 we were tossed about like crazy. But we didn’t take on any water. We were more or less prepared for it. We have had no layoffs. Indeed, we’ve made cautious and incremental additions to our staffing and original reporting capacity. We’ve also been able to substantially increase salaries and benefits. Without a substantial paid membership, however, TPM would no longer exist. Or, it would probably exist in a gutted and more vestigial form. But in 2018 I think it’s the best the site has ever been on many fronts and I expect it to get better. This is no exaggeration. Moving to a combination of subscription and advertising revenue and doing it early has made all the difference in the world.

This is hardly surprising. And I don’t want to present this as a ‘there but for the grace of God …’ sort of thing. This is a better model. It’s not just a necessity. It’s affirmatively better. We planned ahead. We’re doing fine. And we’re better for it. Publishing history has various examples of advertising-only business models. But they are very much the exception. They mainly exist when there are near monopoly barriers to entry into the market which allow publishers to command and defend robust ad rates. Broadcast television is the best example of this. That was possible in part because of the massive capital required to enter the market but just as much by spectrum scarcity. There are other examples. But they’re definitely the exception.

If you’re a member, know that your membership is essential to our vitality and growth. We intend to keep working hard to make it worth your purchase.