That is where things stand.

(In all seriousness we will be bringing back my daily Editors’ Blog post next week after our brains recover from the dumpster that is on fire on the House floor right now.)

In the meantime, Emine Yücel and I are covering all of today’s madness here.

Announcing 2022’s Golden Duke Winners: The Odds Were Never In Your Favor
Thanks for joining us for another trolling season.
By Nicole Lafond | December 31, 2022 9:10 a.m. The competition was fierce. Voter comments got messy. Some of our winners only eked out a victory by a few percentage points. But after a free and fair election, and more than 12,000 votes cast, we’re ready to announce 2022’s greatest losers.

What better way to round out the year than by toasting the scoundrels who did the worst the best? It’s TPM tradition, after all. Ever since Duke Cunningham — in all of his shameless glory, complete with bribe menu, lava lamp, and yacht party — brought us into a new era of public corruption, reveling in the moments when public figures reveal their true, often corrupt and comically grimy colors is what we do best.

Without further ado, join us in our celebration of this years winners — one of the most cartoonishly dishonorable cast of characters we’ve raised a toast to yet. 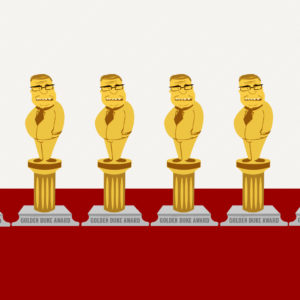 As the Oscars holds its in memoriam each year, so too will the Golden Dukes this year, complete with a bit of dark spin. We would never dance on anyone’s actual graves (probably), but their political graves are fair game.

2022 gifted us a lot of losers who we can now celebrate as winners — in their unscrupulous, unhinged, and ultimately unelectable glory. Introducing the Golden Dukes Forgotten Heroes, an in memoriam to all of our favorite scoundrels who never quite made it to elected office. The 2022 midterms, in all its Big Lie-fueled insanity, gifted us hundreds of options for whacky candidates we will miss the most. Some may run for office again. But in our hearts they’ll always be losers.

The last several years have offered especially fertile ground for conspiracy theories big and small. Some have become so engrained in our collective consciousness that it’s hard to remember they were once just whispers in the swampiest corners of the internet.

Others are just downright dumb, so memorable in their convoluted chaos that they’re worthy of several celebratory cheers. The celebration of truly horrible campaign ads has long been a fan favorite during the TPM Golden Duke season. In 2008, you all voted on the Sleaziest Campaign Ads of the year, which featured an iconic appearance from the John McCain campaign. That year, the late senator’s campaign put out an ad insinuating that Barack Obama preferred sex education for kindergarten students.

Ten years later in 2018, TPM celebrated the Worst Campaign Attack Ads of the year, complete with the National Republican Congressional Committee being super racist in its attacks on Antonio Delgado.

We’re bringing a 2022 version of the category back this year as part of our ongoing celebration of those who did the worst the best: it’s time to vote on this year’s most Cringe Campaign Ads, which in 2022, also includes memes.

END_OF_DOCUMENT_TOKEN_TO_BE_REPLACED
Golden Dukes: It’s Time To Vote On 2022’s Meritorious Achievement In The Crazy
The most competitive category yet.
By Nicole Lafond | December 16, 2022 3:05 p.m. Prepare yourselves. It’s going to be hard to choose.

As I mentioned the other day, things are busy over here at TPM this week. If you don’t know why, this should explain it.

But also you can read more here.

Anyways, it’s still Golden Dukes season and we are relentless in our devotion to celebrating our favorite filth. So far you’ve voted on the the best scandals of the year, on a local and national scale. Now it’s time to move onto one of the most competitive categories of the 2022 Golden Dukes: Meritorious Achievement In The Crazy.

There are a lot of other exciting things happening at Talking Points Memo dot com this week.

But just because we’re launching a massive exclusive series after months of work that reveals some of the most dramatic details yet about the scope of Republican members of Congress‘ involvement in trying to overturn the election does NOT mean we’ve forgotten that it’s Golden Dukes season.

Gotta give the people (you) what they want (opportunities to celebrate those weirdos who did the worst best).

As my colleague David Kurtz hinted in Morning Memo today, we’re about to drop the first of a series of exclusive stories we’re planning to publish over the course of this week about the 2020 election-overturning effort.

It’s based on a pretty massive log of unreported material. I won’t give away much more than that here, but make sure you stick around at TPM this afternoon.