How Misinformation About COVID Vaccines And Pregnancy Took Root Early On And Why It Won’t Go Away
By Duaa Eldeib | August 4, 2022 9:36 a.m. The Insurrection Evangelist Pushing To Bring Anti-Vax Trucker Protests To The US
Leigh Dundas, an attorney who appeared at an anti-vax panel run by Sen. Ron Johnson last month, is a player in the efforts to organize a U.S. convoy.
By Josh Kovensky | February 11, 2022 11:38 a.m. Arizona state Sen. Wendy Rogers (R) has made quite the name for herself in the far-right, Big Lie corners of the Republican Party in the last year. As a key figure in the state’s phony election “audit,” Rogers knows how to aggressively captivate her audience.

She’s injected herself into several election-overturning causes in recent months. In the waning days of the sketch audit of 2020 election results in Arizona’s Maricopa County, Rogers suggested imprisoning members of the Republican-majority board of supervisors when the county rejected the state Senate’s subpoena for additional election-related materials. The Trumpian state lawmaker has since proposed legislation that would make it easier for the governor’s office to investigate so-called instances of election “fraud,” setting state Republicans up to try to Big Lie their way out of any 2022 disappointments for the party.

Now, she’s getting involved in the Canadian anti-vax trucker protests in Ottawa that have devolved into a reckless display of Big Rig power over the course of the last 12 days with thousands of protesters flooding the area surrounding Ottawa’s Parliament building.

END_OF_DOCUMENT_TOKEN_TO_BE_REPLACED SCOTUS Shoots Down Employer Vaccine Requirement; Lets Health-Care Worker Mandate Proceed
Chief Justice Roberts and Justice Kavanaugh were in the majority on both rulings.
By Josh Kovensky and Kate Riga | January 13, 2022 2:51 p.m.
Listen To This: Looking to the Court
By Jackie Wilhelm | January 13, 2022 12:34 p.m.

A new episode of The Josh Marshall Podcast is live! This week, with the Senate all but paralyzed, Josh and Kate discuss the Supreme Court’s posture on the Biden administration’s use of agency power. 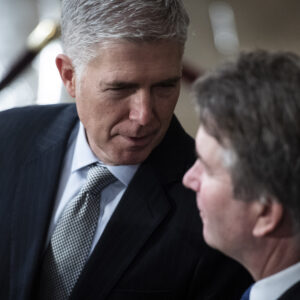