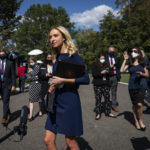 By Summer Concepcion
|
September 3, 2020 2:11 p.m.
EDITORS' NOTE: TPM is making our COVID-19 coverage free to all readers during this national health crisis. If you’d like to support TPM's reporters, editors and staff, the best way to do so is to become a member.

White House press secretary Kayleigh McEnany kicked off her briefing on Thursday by playing on loop a video of House Speaker Nancy Pelosi (D-CA) at a salon earlier this week in San Francisco, where the Democratic leader flouted COVID-19 restrictions in the city.

But the White House doesn’t have a leg to stand on when it comes to policing anyone else’s behavior amid the coronavirus pandemic. From President Trump repeatedly insisting the virus will simply “disappear” to hosting a largely unmasked audience at the White House during last week’s RNC to applying political pressure on the development of a vaccine, the Trump administration has delivered a disastrous response to a deadly virus that has killed more than 180,000 Americans.

McEnany’s briefing on Thursday began with security footage playing on loop showing Pelosi not wearing a mask while walking through a salon in San Francisco with wet hair. On Tuesday night, Fox News first reported on the security footage of Pelosi. The owner of the salon, Erica Kious, told Fox News that she felt that it was “a slap in the face” seeing Pelosi flout COVID-19 rules, given how salons in San Francisco had been shuttered since March and were allowed to reopen on Sept. 1 for outdoor hairstyling services only.

The next day, President Trump bashed Pelosi over her tresses tempest in Wednesday morning tweets. Later Wednesday, Pelosi refused to apologize for flouting the city’s COVID-19 restrictions, saying that she complied with a salon employee’s interpretation of the city’s new COVID-19 regulations and that she was “set up.”

On Thursday, McEnany slammed Pelosi for supposedly wanting “small businesses to stay shut down but only reopen for her convenience” and called for the House speaker to apologize to the hair salon’s owner who’s been receiving death threats.

The White House’s attack against Pelosi for flouting COVID-19 restrictions comes a week after Trump and administration officials repeatedly failed to practice social distancing and mask-wearing during the RNC, which culminated with the President delivering his acceptance speech to an audience of about 1,500 people in front of the White House.