Steve Bannon isn’t President Trump’s only MAGA-universe tie to “We Build The Wall.”

Several other members of President Trump’s circle, including a top official in his administration as well as his own son, embraced the private border-wall gambit, before the White House’s attempts Thursday to distance the President from it.

Multiple people involved in We Build The Wall — including Bannon, a former White House advisor who also led Trump’s campaign — have been indicted by a federal grand jury for an alleged fraud and money laundering scheme. With announcement of the charges Thursday, Trump is now claiming he never liked the idea of a privately-funded project to build a wall on the Mexican border.

But the bounty of evidence showing how several of his allies cozied up to the We Build The Wall endeavor tells a different story. Here is a look at who in TrumpWorld had previously given the project a thumbs up:

Trump Jr.’s girlfriend, who also helps lead the Trump campaign’s fundraising operations, spoke at the July 2019 event as well, earning her a name-check on We Build The Wall’s webpage as an endorser.

The acting Secretary for the Department Homeland Security signaled his support for We Build The Wall last November, when asked about the private effort. “I welcome all that want to be part of the solution,” Wolf said, during a visit to El Paso.

We Build The Wall touted the comments as an endorsement. 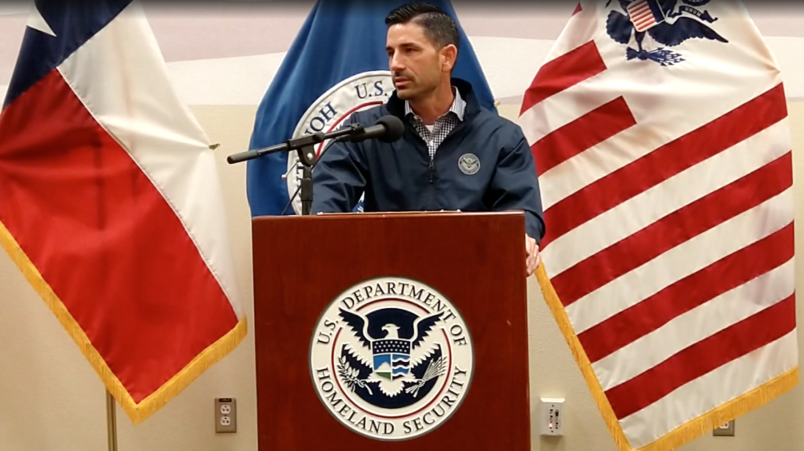 Kobach — the anti-immigrant crusader who advised Trump during the transition and angled (unsuccessfully) for a position in his administration — is the general counsel for We Build The Wall’s advisory board, according to its website. He was also extremely active in promoting the project in the media and played a prominent role at its events. In January 2019, Kobach said he had spoken to the president about the project and that Trump had given it his blessing. Trump ally Erik Prince is listed on We Build The Wall’s advisory board. While he has been less of a public face for it compared to the other members of its board, he did phone into a February 2019 event celebrating the beginning of construction at one site, according to Politico. President Trump’s OG campaign manager is a fan of the We Build The Wall project, and appeared on a panel at an event the group held in New Mexico. David Bossie has been in and out of Trump’s circle, with Trump briefly souring on his former campaign advisor for exploiting his name for a sketchy PAC of his own. Not a huge surprise then that Bossie also threw his lot in with the We Build The Wall crew, appearing on the panel with Lewandowski at the 2019 New Mexico event. Fellow board member Sheriff David Clarke — an enthusiastic Trump supporter who spoke at the 2016 GOP convention — has participated in several events for the group, including a March 2019 rally in Cincinnati. The ex-Red Sox player is so ardent in his Trump support that the President publicly encouraged him to run for Congress. He also is a We Build The Wall board member. Trump’s anti-immigration prototype in Congress, Texas Rep. Louie Gohmert was also a participant at the New Mexico event and checked out a section of wall the group had built with its leader Brian Kolfage, who was among those indicted. The Students for Trump co-founder spoke at the 2019 New Mexico event while also cheering on the project on social media. On Thursday, he complained on Twitter about the lack of federal investigation into the Clinton Foundation.