17 mins ago
Biden Wants Clyburn’s Endorsement. Clyburn Has Yet To Budge.

Deflecting criticism about the detention of large numbers of Uighurs and other minorities in large camps in China on Sunday, a Chinese diplomat based in Islamabad, Pakistan, posted a series of unusually aggressive tweets about Washington, D.C. and American politics writ-large, at one point calling former National Security Adviser Susan Rice “shockingly ignorant.”

In response to a tweet from the diplomat, Lijian Zhao, about segregation in Washington, D.C. on Sunday, Rice called him “a racist disgrace. And shockingly ignorant too.”

Instead of retreating from the suddenly massive spotlight offered by a social network banned in his home country, Zhao doubled down.

“You are such a disgrace, too,” he responded. “And shockingly ignorant, too.” Why the blunt tweets from a deputy mission chief in Islamabad? It takes some unpacking, and even then, doesn’t make much sense.

The episode started with a letter to the United Nations’ human rights commissioner, signed by 22 member countries on the U.N Human Rights Council, denouncing “large-scale places of detention, as well as widespread surveillance and restrictions, particularly targeting Uighurs and other minorities in Xinjiang.”

Officially called “re-education camps,” the large camps in China’s northwest region of Xinjiang have been a source of global concern for years.

When 37 countries including Saudi Arabia and Russia defended the Chinese in another letter, Zhao celebrated what he called “a big slap on the face of US &its western cohorts.”

The United States, for what it’s worth, didn’t sign the initial letter, having quit the Human Rights Council last June. Still, Zhao accused it of “pull[ing] the strings by using 22 puppets.”

Zhao followed that with a bit of since-deleted whataboutism, focused on segregation in Washington, D.C.

“There’s a saying,” in Washington, Zhao tweeted: “‘Black in & white out,’ which means that as long as a black family enters, white people will quit, & price of the apartment will fall sharply.” 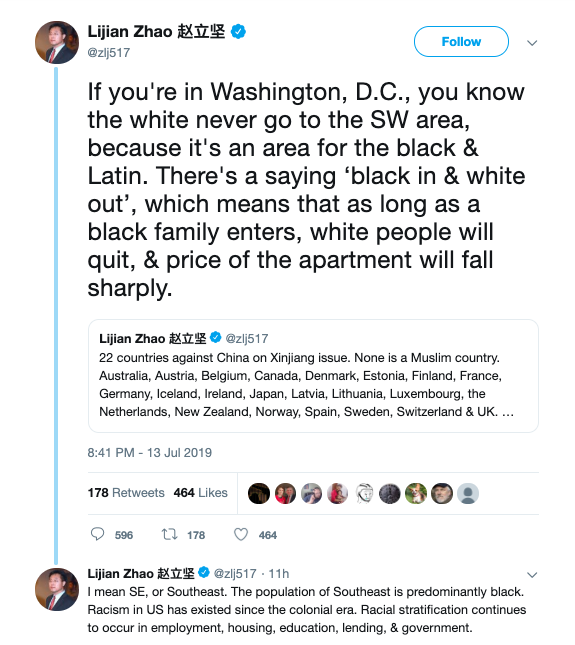 Why a Chinese diplomat in Islamabad was commenting on housing policy in D.C. was unclear, and the Chinese embassy in Washington didn’t respond to TPM’s request for comment Monday.

By now, Rice had caught wind of the tweet, mistakenly referring to Zhao as a member of the Chinese embassy in D.C. and pressuring the ambassador there to fire him.

Calling Zhao a “racist disgrace,” Rice added that “In normal times, you would be PNGed [Persona Non-Grata’ed] for this.”

Naming China’s new ambassador to the United States, Rice wrote “I expect better of you and your team. Please do the right thing and send him home.”

China’s ambassador to the United States, Cui Tiankai, had only used his new Twitter account for a few days as of Zhao’s barrage. His latest message, from Friday, was an ominous warning on Taiwanese sovereignty.

#Taiwan is part of #China. No attempts to split China will ever succeed. Those who play with fire will only get themselves burned. Period.

Rice wasn’t the only one who noticed the strangely aggressive tweet from a Chinese official.

The Financial Times’ Peter Spiegel mused, “Has everyone gone completely insane over the weekend?” And a former Senate Foreign Relations Committee staffer, flagged by The Washington Post, wondered, “Is this a parody account?”

Zhao kept tweeting, though, and also retweeted dozens of others’ opinions.

The remarkable racial segregation of Washington DC in one map. https://t.co/nfiY7gXS2a

Truth hurts. Gun violence poses grave danger. There were 57,103 gun violence incidents in US in 2018, leaving 14,717 killed & 28,172 injured. The number of children killed or injured was 3,502. Gun violence has shortened average life expectancy of Americans by nearly 2.5 years.

Commenting on everything from “racial politics” to gun violence, religious intolerance, money in politics and sexual harassment, Zhao tweeted at one point that “Truth hurts.”

But he never addressed the camps in Xinjiang, the subject of his original missives. In perhaps a meta commentary on his situation,  Zhao on Monday retweeted a BuzzFeed news article on the tweets he’d deleted not long earlier.

This is really fascinating: Chinese diplomats stepping into the Trumpy twitter world https://t.co/7Pt0R33Exe

Though Twitter is inaccessible in China without a bit of digital elbow grease, Zhao’s attack earned the attention of the Chinese pro-government tabloid Global Times, which ran a story headlined “Some in US deserve ‘racist disgrace’ more than others.”

Piggybacking on President Donald Trump’s recent racist attacks against several Democratic congresswomen, the article posited Trump, but not Zhao, deserved criticism, and accused Western countries critical of the abuse of ethnic minorities in Xinjiang of relying on “subjective judgements and biased reports.”

“Trump and his colleagues,” the article read, “deserve the ‘racist disgrace’ more than others.”