1 day ago
Judge Cannon Does Trump Another Solid

Amid the torrent of tweets President Donald Trump has sent in recent days attacking NFL players and owners for protesting the national anthem on bended knee was an image of a wounded veteran. Above the photograph of the heavily decorated double amputee was a caption asking what “this BRAVE American would give to stand on his OWN two legs just ONCE MORE for our #Anthem,” along with the hashtags “#MAGA” and “#NFL.”

That veteran, retired Marine Staff Sgt. John Jones, told TPM on Tuesday that he takes no issue with NFL players’ protests—but he’s not enthused about being dragged into the politics of whether someone should stand or not stand for the national anthem.

As he drove to his job as director of development at Workshops for Warriors, a California-based non-profit that trains veterans to be certified machinists, the two-tour veteran of the Iraq War explained that while he would not personally choose to protest the anthem in that way, he disagreed with the idea that doing so was “not acceptable,” as Trump has insisted. 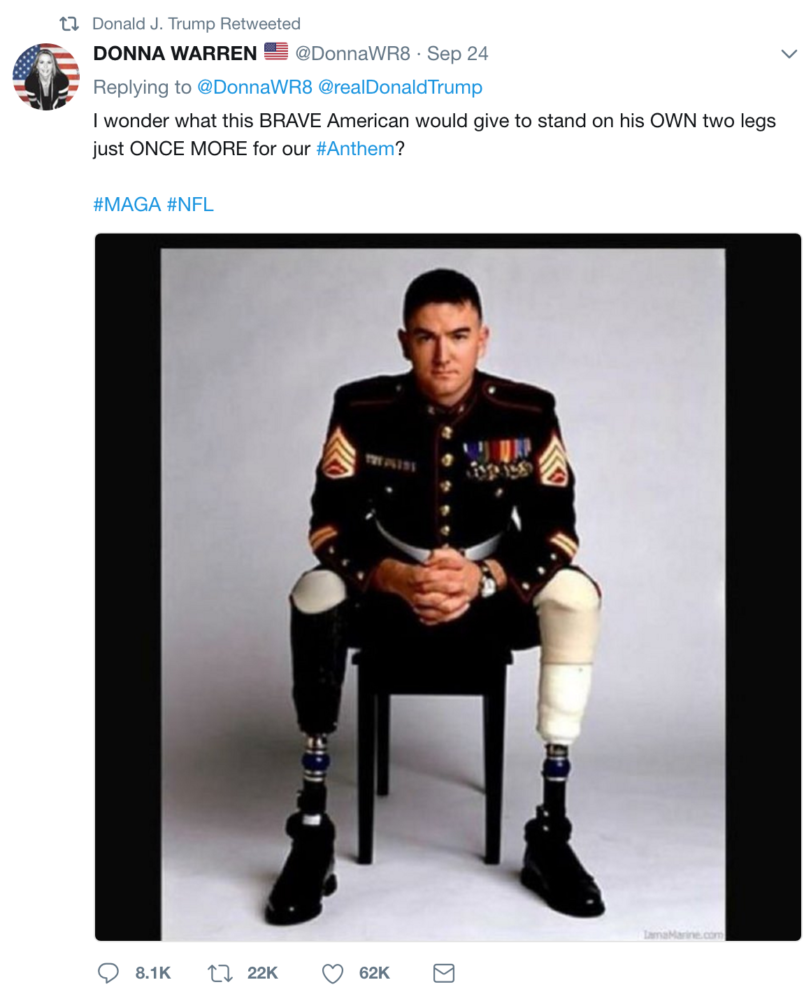 “I went over there and I fought for the rights and freedoms of everybody to do whatever they wanted to do in a lawful manner,” Jones said. “So if the NFL as a whole wants to protest the flag and protest America, then so be it, that’s your right.”

“Keep it peaceful, keep it respectful and I don’t care what you do,” he added.

The players who started the “take a knee” protests say they’re taking a stand against police brutality and racial inequality; San Francisco 49ers safety Eric Reid lamented in a Monday New York Times op-ed that their actions were “still being misconstrued as disrespectful to the country, flag and military personnel.”

The portrait of Jones in the meme that Trump retweeted was taken by photographer Timothy Greenfield-Sanders for the 2007 HBO documentary, “Alive Day Memories: Home From Iraq.” Jones, who lost both legs in a landmine explosion while traveling in a Humvee convoy through Anbar province, said this is not the first time the image has been circulated on social media by people promoting their own political agendas.

He likened his experience to the use of the portrait of Pat Tillman, an NFL player and Army Ranger who was killed in Afghanistan in 2002. Tillman and his family eventually became outspoken critics of the War on Terror and Bush administration. Nevertheless, Trump retweeted Tillman’s photo to bash the NFL, prompting Tillman’s widow, Marie, to issue a statement urging “our leaders” not to “politicize” her husband’s service to advance their views.

Jones had a slightly more generous take. Joking that few people in the U.S. can say that the President has shared their photo, he told TPM he doesn’t take issue with Trump retweeting an existing meme. But he said he wishes his likeness wouldn’t be used as a partisan football without his blessing.

“So many people have taken that photo and never even contacted me, never found out who I was or anything to say, ‘Hey can I utilize your photo for this?’” Jones said.

He said he only gets involved and tries to “shame” people for doing so if they use his photo in a “derogatory” manner.

But Jones wishes he could maintain a bit more control of his image and be left to focus on his work of helping veterans find gainful employment and stability as they transition out of the armed services.