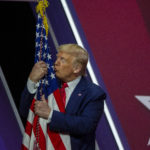 17 hours ago
With Georgia Certification Complete, Ossoff And Warnock Are Set To Be Sworn In

Nick Ochs, a Hawaii resident and member of the right-wing street gang the Proud Boys, had a grand ol’ time inside the nation’s Capitol Wednesday.

Part of the wave of hundreds of would-be insurrectionists who stormed the legislature, he tweeted a picture of himself in the halls of Congress smoking cigarettes with a friend.

Afterward, Ochs allegedly admitted what he’d done to CNN. “I just walked in and filmed,” he said, a quote that perked federal prosecutors’ ears.

Ochs (pictured below, right) is one of around 50 people that have been charged so far in connection with the Capitol breach, according to court documents and a DOJ press release Friday.

Hello from the Capital lol pic.twitter.com/H1Axdou708

Ochs didn’t make the job terribly hard for authorities. A special agent wrote in an affidavit in support of Ochs’ arrest that he identified the Proud Boy by comparing his social media photos to other images Ochs used during his unsuccessful 2020 bid for the Hawaii House of Representatives.

Some cases stood out, like that of Richard Barnett, who bragged to reporters about stealing Nancy Pelosi’s mail, or Christopher Alberts, who allegedly tried to flee police officers after hearing one officer observe to others that Alberts had a gun on his hip.

In addition to the violent entry and disorderly conduct charges, Barnett is also facing a count of theft of public money, property, or records. And Alberts faces a gun charge.

Six of the defendants were addressed in a single statement of facts accompanying their arrest warrants, written by a Capitol Police officer.

The group was asked in “a loud and clear voice” to leave the upper level of the Capitol Visitors Center. Instead, the officer wrote, they responded by “shouting and cursing at Capitol Police officers.” They were promptly cuffed.

One man, Joshua Pruitt, appears to have had some downright bad luck.

According to a statement of facts from a Metropolitan Police officer, Pruitt was arrested  around 9:20 p.m. alongside others on the streets of D.C. for a simple curfew violation after Mayor Muriel Bowser had declared a state of emergency and night had fallen.

Later, as he was being processed, Pruitt caught the eye of an MPD investigator who’d seen his face — in an image on the Washington Post website.