5 hours ago ago
WATCH: Police Remove O’Rourke From Presser After He Confronts Abbott

5 hours ago ago
Jan. 6 Panel Has Testimony That Trump Was Intrigued By Whole ‘Hang Pence’ Thing: NYT

Untangling The Web Of Payments Between Cohen And Elliott Broidy

The records, which list a number of “possible fraudulent and illegal financial transactions,” detail tens of thousands of dollars passing between the two men through a series of intermediaries between November 2017 and March 2018.

The document were released online by Daniels’ attorney, Michael Avenatti. Much of its contents were subsequently corroborated by a number of major news organizations.

The unusual series of transactions between the two Trump allies is just one thread that federal investigators are digging into as they probe Cohen’s finances. Cohen, President Trump’s longtime fixer, is reportedly under investigation in the Southern District of New York for bank fraud, campaign finance violations, and other possible crimes.

The document focuses on Essential Consultants LLC, a firm set up by Cohen to handle hush money payments to Stormy Daniels, an adult film star who claims to have had an affair with Trump. Cohen also negotiated hush money payments on behalf of Broidy, a wealthy businessman and top Republican fundraiser who has said he impregnated a former Playboy Playmate.

The document notes that Cohen received at least $187,500 from Broidy’s Bank of America account. “The business purpose of these payments is unclear,” it adds.

The timeline and amount of money paid tracks with previous reporting about the coverup involving the former Playmate.

As the Wall Street Journal reported earlier this year, Broidy paid Cohen $250,000 to cover his legal fees for negotiating a nondisclosure agreement involving Broidy’s affair with former Playboy model Shera Bechard. The first installment to Cohen, for $62,500, was made out to Essential, per the newspaper.

According to the Journal, the settlement Cohen helped negotiate stipulated that Bechard would receive $1.6 million from Broidy that would be paid to her in quarterly installments over two years. 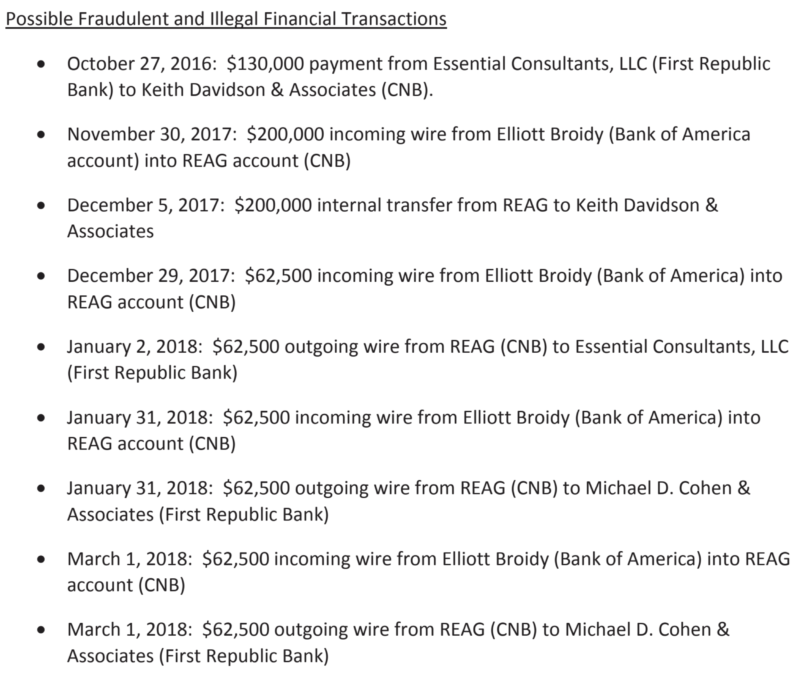 Per the Avenatti document, Broidy’s first payment was made on Nov. 30, 2017 into the account of the Real Estate Attorneys’ Group (REAG), a California-based firm specializing in commercial real estate. On Dec. 5, a transfer for that same amount was channeled from REAG to the firm of Keith Davidson, an attorney then representing Bechard.

That month, the Journal first revealed that Cohen made the hush money payments on Trump’s behalf and used Essential Consultants to do so. After that series of stories came out, Broidy began paying fee installments directly to Cohen.

On March 1, the pattern repeated itself. Broidy wired $62,500 to REAG, and the same amount was promptly wired to Cohen.

It’s not clear from the newly released information whether or how the balance of the legal fees owed to Cohen or the settlement amount to Bechard was paid.