1 hour ago
Pelosi Slams DeVos’ Push To Reopen Schools: ‘This Is Appalling’

A University of Alabama student group that invited white nationalist Jared Taylor to campus insists it just wants to ensure “all social and political views, regardless of how offensive they may appear to the general public” are presented to the student body.

Students for America First (SFAF) “neither endorses nor condemns Mr. Taylor’s work,” the group said in a statement about the April 19 event.

SFAF has not taken the same steps to distance itself from another controversial figure: openly anti-Semitic Wisconsin GOP candidate Paul Nehlen. The group’s social media feeds are full of messages promoting the politician, whom SFAF endorsed.

The ongoing support for Nehlen is striking, given that he was excommunicated by most of the far-right earlier this year. Breitbart News cut ties, calling his increasingly offensive tweets proof that Nehlen had “gone off the deep end.” Nehlen responded by going on the radio show of former KKK Grand Wizard David Duke and calling his expulsion proof that “Jews control the media.” The “pro-white” Republican, who neo-Nazi figurehead Andrew Anglin deemed “the leader of the American Nationalist movement,” was also permanently banned from Twitter in February for repeatedly violating the terms of services with his inflammatory posts.

This has not stopped SFAF from advocating for Nehlen, who the group called one of “our own people” in a recent post on Gab, a Twitter alternative popular among the loose amalgamation of white nationalists, anti-Semites and trolls that compose the alt-right. (Nehlen has been banned from Gab, too). 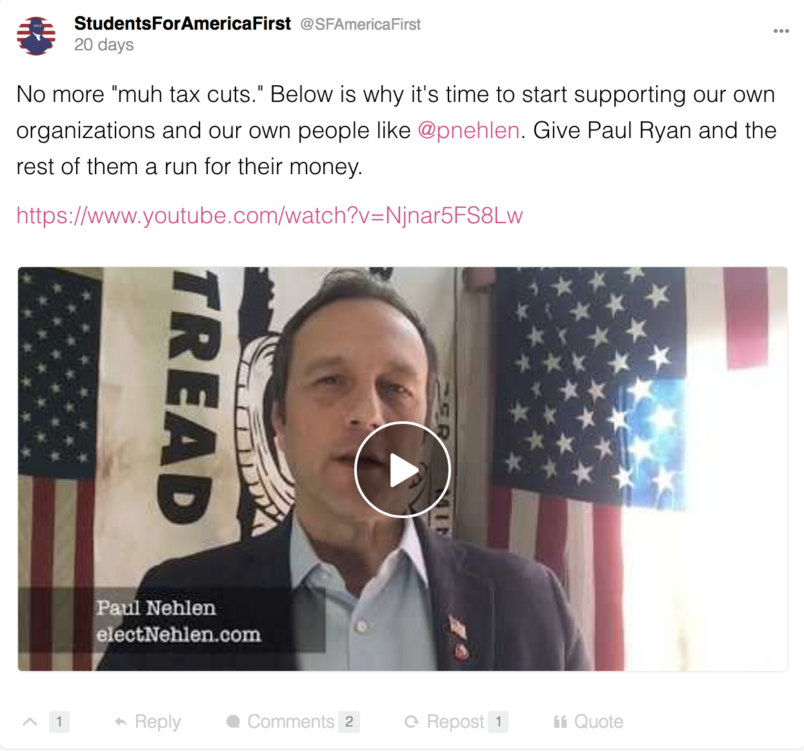 SFAF even invited Nehlen to campus for an event originally slated to take place this week. In promotional material, the group benignly referred to him as a “self-made entrepreneur, Fortune 500 CEO, inventor, citizen legislator and future Representative from Wisconsin.” An online listing for Nehlen’s speech on the University of Alabama’s site said it had been cancelled.

Other messages on SFAF’s Gab and Twitter feeds play on themes popular among the alt-right. The group shared a message alleging that white people are going to be drugged and brainwashed into “accepting ‘ethnic diversity.’” A number of posts reference the demise of “Western civilization” thanks to undocumented immigration. 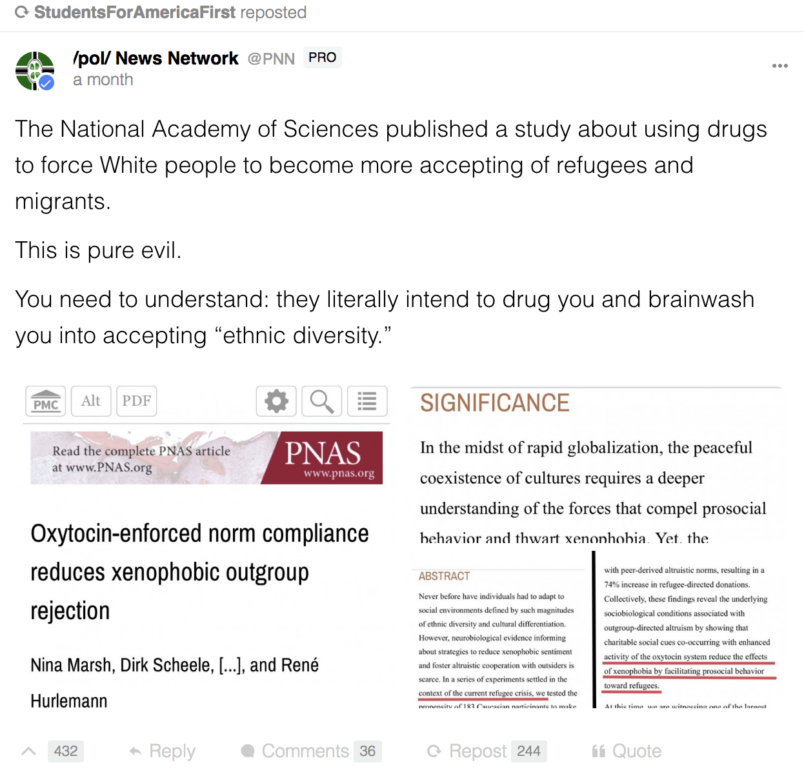 SFAF did not respond to a list of questions provided by TPM. After Jared Taylor’s invitation was announced, the group sent over a 300-word statement asserting its commitment to preserving the First Amendment by hosting individuals with “‘controversial’ views.” The statement referred to Taylor, who is known for promoting the idea that black and Hispanics are genetically inferior, as a “noted Right-wing intellectual” who “we look forward” to hosting.

The group’s invitation has been roundly condemned by the school administration and other campus organizations.

University of Alabama president Stuart Bell called Taylor’s ideology “counter to our institutional values,” while the school’s NAACP chapter said that SFAF’s right to free speech doesn’t mean that the group should endorse “bigotry and racism.”

“We look to our administrators to protect the inclusivity, safety, and well being of minority students,” the group said in a tweet. “White supremacy is a dangerous and hurtful voice to give power to.”

SFAF acknowledged that their own faculty advisor, statistics professor Bruce Barrett, stepped down from his post over the invitation, acknowledging in a tweet that “he was not fully informed of Jared Taylor’s polarizing statements on race and identity.”

Barrett did not respond to TPM’s requests for comment.

Many of SFAF’s public statements simply affirm the Trump administration’s positions on building a southern border wall and forcibly expelling undocumented immigrants, and the group is hardly the first to invite an open white nationalist to speak on campus. Taylor has made “the case for white identity” to students at Michigan State University and Towson University.

Alt-right figureheads like Richard Spencer, who recently abandoned his own college tour, and Identity Europe have explicitly advocated for reaching out to young students as a means of recruiting and indoctrinating them early on. Groups like SFAF, in turn, frame inviting speakers like Taylor as a way of pushing the envelope and rejecting “politically correct” culture.

As Brian Levin, director of California State University’s center for the Study of Hate and Extremism, put it: “We’re a splintered society and trust in the institutions that held us together, like academia, have hit multi-decade lows. One of the ways we can be anti-elitist and anti-establishment is to invite someone from the outside. And that’s part of the marketing that’s been done: you’re not hearing the full story, so invite this controversial speaker.”

“It’s a very brazen, in-your-face, mainstreamed white nationalism,” Levin continued. “This invitation is just another star in that constellation, saying white nationalism is now in that night sky of sociopolitical activity in the United States. And that’s scary.”