6 hours ago
The Other Cancel Culture: How a Public University Is Bowing to a Conservative Crusade

A student group at the University of Alabama’s flagship campus has invited prominent white nationalist Jared Taylor to campus to give a speech about diversity.

“They’ve asked me to talk about whether diversity is a strength,” Taylor, publisher of long-running white nationalist publication American Renaissance, told TPM in a Friday morning phone call. “I think you can imagine the position I will take on that question.”

Taylor has publicly promoted his views on the genetic inferiority of black and Hispanic people for some three decades. Recent headlines under his byline on the American Renaissance site include “How To Achieve Racial Separation” and “Send Them Home,” a reference to undocumented immigrants.

“I assume they have researched me and have some idea of who I am,” Taylor said.

The invitation to speak on April 19 came from Students for America First, an organization that claims to be dedicated to “dealing with the challenges American and Western ideals face in our country.” The group’s red logo features the hissing rattlesnake of the Gadsden Flag—an image that gained popularity with the tea party movement. 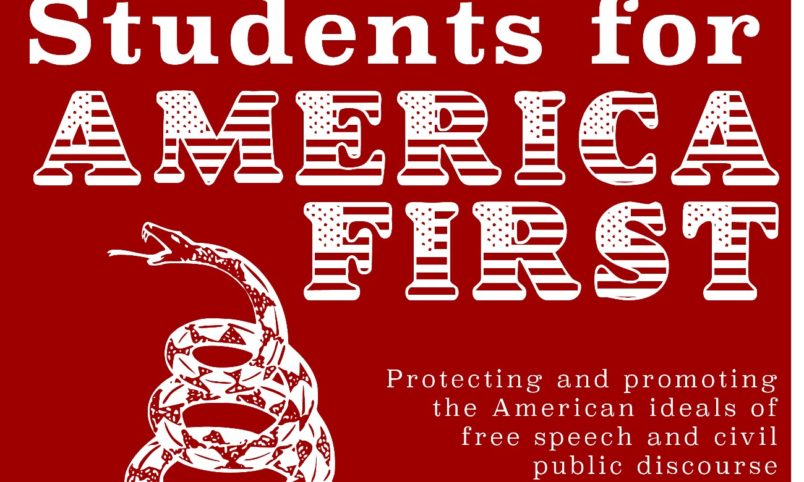 In a statement provided to TPM on Saturday by Lincoln Egbert, America First’s vice president, the group described Taylor as “a noted Right-wing intellectual and editor of American Renaissance.”

“SFAF neither endorses nor condemns Mr. Taylor’s work: our sole motivation in deciding to host him is to ensure that all social and political views, regardless of how offensive they may appear to the generic public are accounted for in the free marketplace of ideas that ought to exist on the university campus,” the statement reads.

“We believe that [it] is our right as Americans to decide for ourselves what ideas are right and which wrong, not to have that decision made for us by the media and our universities,” it continues, adding that the members “look forward” to hosting Taylor.

University president Stuart Bell has condemned the invitation in a public statement, emphasizing that Taylor’s ideology “is counter to our institutional values” and that “hate and bigotry have no place” at the school. Bell said that as a public institution with a “commitment to free speech,” the university cannot prevent the event from taking place.

Taylor’s visit threatens to reignite an ongoing debate about hosting white nationalist speakers on college campuses. The difficulty of preemptively proving that a speaker poses a violent threat and the strong First Amendment protections in public spaces like state school campuses makes it hard for schools to stop such events from happening.

A handful of universities were sued by the graduate student who booked white nationalist Richard Spencer’s college tour after they refused to let Spencer speak, citing concerns about violence and disruption to campus life. Spencer recently quit the tour, saying the events were no longer “fun” because they were often derailed by large counter-protests by anti-racist activists.

Taylor, who is less prone to courting the media than Spencer, acknowledged that such mass protests were possible at his upcoming event.

“Anyone who speaks as a white person in the name of the legitimate interest of whites is going to attract an enormous amount of opposition,” he claimed.

Bell said in his message to the student body that “other events and activities are in the planning stages” but did not elaborate on what they entailed.