3 days ago
Judge Cannon Does Trump Another Solid

The Conspicuous Gap In Mueller’s Case Against Trump Adviser Papadopoulos

Almost as striking as the details Special Counsel Robert Mueller lays out about a Trump campaign adviser’s Russia-related communications is the conspicuous gap in the timeline offered in the recently unsealed court documents.

For more than three months, starting in March 2016, George Papadopoulos communicated regularly — on occasion, multiple times a week — with three figures who presented themselves as connected to the Russian government, according to the court filings.

But the timeline laid out in the filings by prosecutors comes to an abrupt halt on July 22, 2016.

That is the day Wikileaks began publishing the hacked Democratic National Committee emails.

Beyond a vague reference to Papadopoulos’ efforts through “mid-August” to set up meetings between Russian and Trump officials, the Papadopoulos-Russia communications detailed in the documents don’t pick up again until Oct. 1, 2016.

Former federal prosecutors tell TPM that just because such communications aren’t documented in the charges doesn’t mean they don’t exist.

“It’s certainly plausible he has, going forward, more information about what people are saying about these emails that came out,” Nick Akerman, a former federal prosecutor who worked on the Watergate investigation, told TPM.

Each filing provides a similar arc to the allegations against the Trump adviser — that he communicated with Russia-tied figures while a Trump campaign adviser and then lied to the FBI about it — but offer a somewhat different set of details and evidence.

In them, Mueller alleges and Papadopoulos admits that he communicated with three Russia-linked figures: a professor who Papadopoulos “understood to have substantial connections to Russian figures,” a “Female Russian National,” and a Moscow based individual who told Papadopoulos he had “connections to the Russian Ministry of Foreign Affairs.”

During an April 26, 2016 meeting, the professor told Papadopoulos that the Russians had “dirt” on Hillary Clinton in the form of emails, according to his statement of offense.

If Papadopoulos’ communications with his Russian connection continued after the Wikileaks emails were released, it could be key to the case Mueller is putting together – or at the very least, a tool he could use to vet the honesty of the other witnesses he is interviewing.

The sudden drop-off in communications is starker in the arrest affidavit, which has gotten less attention than the statement of offense posted to the Special Counsel’s website.

A few days before the GOP national convention, Papadopoulos Facebook messaged the Ministry of Foreign Affairs connection to set up a time to chat. A few days later, he messaged the contact telling him to “Keep an eye on the speech tonight;” Trump gave his convention speech that evening. The last correspondence the court filings document between Papadopoulos and that contact is on July 22. 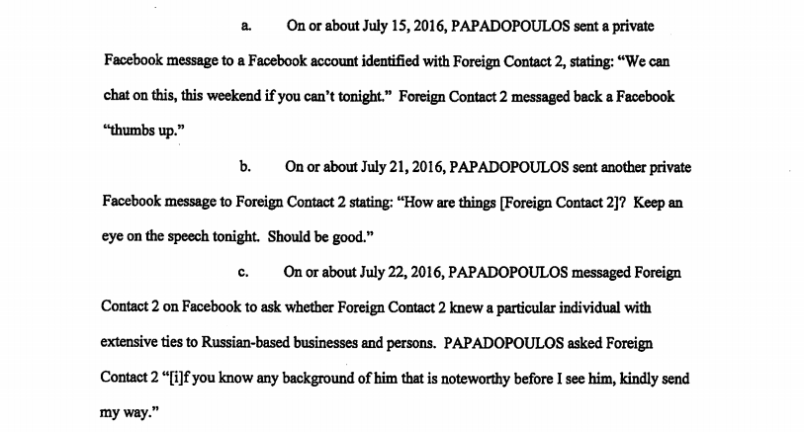 It is certainly possible that that the explanation for the gap is the simplest one: that Papadopoulos stopped communicating with the Russian-linked figures, perhaps because he got spooked with Wikileaks’ release of the hacked emails.

But even an end of communications could be of value to Mueller, according to Renato Mariotti a former assistant U.S. attorney who is now running for Illinois attorney general.

“That’s something that a prosecutor could use to draw an inference that the person might be aware of the consequences of their interactions with the Russians,” he said.

If Papadopoulos continued to communicate with his Russian connections after July 22, 2016, and Mueller has decided to hold that fact close to his chest, it could be because it’s of strategic value as he moves forward with the investigation.

“They could use that information now to test the veracity of other targets or subjects of the investigation,” said Randall Samborn, who served as spokesman Special Counsel Patrick Fitzgerald’s Valerie Plame leak investigation.

Or Mueller may be sitting on something even stronger — perhaps central to a larger case he could be building about Russian meddling in the election and collusion by the Trump campaign.

Another possibility, Mariotti said, was that those communications contained something that’s politically sensational — such Papadopoulos’ cheering on the Wikileaks’ release — but not necessarily pertinent to any criminal allegations.

“You could imagine Mueller sanitizing those emails from a charging document because they could create prejudice while not being probative of a crime,” he said.

Regardless, Mueller was by no means obligated to include in the filings every piece of evidence he had related to Papadopoulos, and prosecutors typically use this kind of ambiguity to their advantage, said Patrick Cotter, a former federal prosecutor who investigated organized crime for the U.S. Attorney’s Office of the Eastern District of New York.

“While Mueller appears to have wanted to make it known to all concerned that [Papadopoulos] was providing evidence, it would not be useful or smart to tell everyone exactly what that evidence is,” Cotter told TPM in an email. “ When the subjects do not know what the investigator does and does not know, they have a more difficult time sculpting their responses to questions, subpoenas, etc. and devising their strategy.”

Since the unsealing of the documents, Trump associates have played down his role on the campaign. However, Papadopoulos told the Wall Street Journal in April that his involvement extended through the transition.

The statement of offense itself sent a signal that there was more to the Papadopoulos story than the court documents were telling.

“[The statement] does not include all of the facts known to me regarding this offense,”  Papadopoulos conceded.