Special counsel Robert Mueller got a major court victory Tuesday when a federal judge in Virginia on Tuesday declined to dismiss the charges Mueller had brought against Paul Manafort — but not without the judge taking multiple swipes at Mueller, the regulations concerning his appointment, and the very notion of a special counsel.

In a series of asides, commentaries, extended footnotes, and musings, U.S. District Judge T.S. Ellis opined at length on the appropriateness of having special counsels, expressed his distaste for Mueller’s prosecutorial tactics, and warned darkly of “partisan prosecutions.”

“The appointment of special prosecutors has the potential to disrupt these checks and balances, and to inject a level of toxic partisanship into investigation of matters of public importance,” Ellis wrote, going on to suggest that a bipartisan commission with subpoena power would be better suited to investigate election interference.

“Although this case will continue,” Ellis said, in closing his opinion, “those involved should be sensitive to the danger unleashed when political disagreements are transformed into partisan prosecutions.”

Ellis’ opinion started with an extended discussion about the legal landscape surrounding the appointment of special prosecutors.

He noted that a law concerning the appointment of independent counsels was allowed to lapse in 1999, with lawmakers believing it “had become more often a political weapon to be unleashed in the ongoing, indeed escalating culture wars, than a tool for ferreting out and prosecuting crimes ostensibly committed by high-ranking government officials.”

The judge argued that some of “criticisms leveled” at the expired independent counsel law “seem equally applicable to the current Special Counsel scheme.”

He said that the Justice Department failure to impose a time or budget limit on its special counsel regulations– while telling “him or her to find crimes” –  “allows a Special Counsel to pursue his or her targets without the usual time and budget constraints facing ordinary prosecutors, encouraging substantial elements of the public to conclude that the Special Counsel is being deployed as a political weapon.”

A footnote noted the financial costs Mueller’s office reported in its first few months of existence: 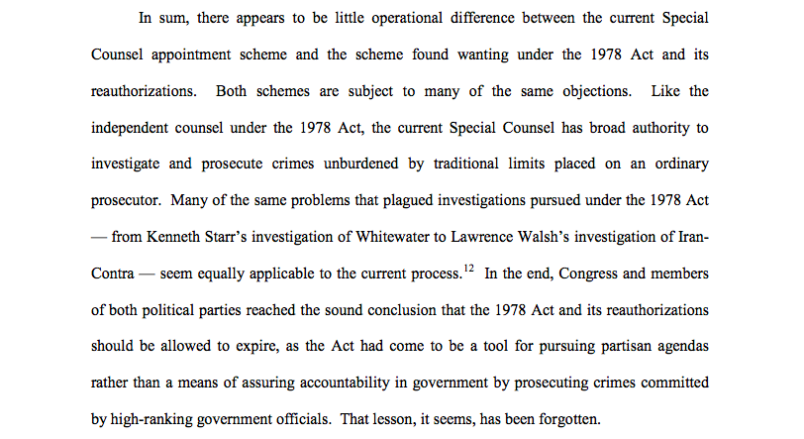 Ellis did not stop with the issues he had with special counsel regulations in general. Moving on to the details of the current matter of him, the judge speculated in a footnote that Mueller’s prosecution of Manafort is part of “larger plan” to put pressure on President Trump. Such tactics are “neither uncommon nor illegal,” but “they are distasteful,” Ellis said.

Ellis then zeroed in on Manafort’s specific arguments for why the charges should be dismissed. Though Ellis concluded that the indictment does fall within a provision of the appointment order that sanctions investigation into “any links and/or coordination between the Russian government and individuals associated with the campaign of President Donald Trump,” the judge in another footnote said that the “wisdom” of including such a provision in Mueller’s appointment order was “seriously in doubt.”

The judge addressed other arguments that Manafort made during the proceedings that another line in the Mueller appointment order — which puts in the special counsel’s purview “any matters that arose or may arise directly from the investigation — is too broad. Ellis said that this question was “close” and one where Manafort’s arguments had “merit,” but ultimately decided that it was not an issue he needed to resolve.

Even still, he found room to levy a few more criticism of the current special counsel system.

He called for in a footnote “limitations, divisions, and requirements for frequent consultation” that “would ensure that the Special Counsel’s work is carefully reviewed by democratically accountable leaders within the DOJ.”

Ellis wrapped up his 31-page opinion with more tough words for the concept of a special counsel, cautioning that his decision Tuesday “should not be read as approval of the practice of appointing Special Counsel to prosecute cases of alleged high-level misconduct.”

Ellis said that “this case” was “a reminder that ultimately, our system of checks and balances and limitations on each branch’s powers, although exquisitely designed, ultimately works only if people of virtue, sensitivity, and courage, not affected by the winds of public opinion, choose to work within the confines of the law.”

Read the full opinion below:

Tierney Sneed (@Tierney_Megan)  is a D.C.-based investigative reporter. She focuses on voting rights and previously covered health care for TPM.
Have a tip? Send it Here!
Dear Reader,