Judge: Trump Voter Fraud Panel Docs Must Be Turned Over To Member Who Sued

Nearly six months after President Trump, citing growing litigation, dissolved his sketchy voter fraud commission, a federal judge in Washington said Wednesday that certain commission documents should be turned over to one of its commissioners, who sued last year over the panel’s lack of transparency.

U.S. District Judge Colleen Kollar-Kotelly had previously ordered in late December that the commissioner, Maine Secretary of State Matt Dunlap (D), receive the documents, including internal communications, that he was requesting. About two weeks after her order, the commission folded, but the legal fight over his case has continued.

The judge said Wednesday that the commission must turn over the documents that were covered in her Dec. 22 order by July 18. The judge said that she had not “considered line-by-line the documents requested by Plaintiff.” But she pointed to the documents referenced in an index of commission-related communications, which was provided in a separate lawsuit, as an example of what she was expecting to be turned over.

Her order Wednesday gave other examples as well: 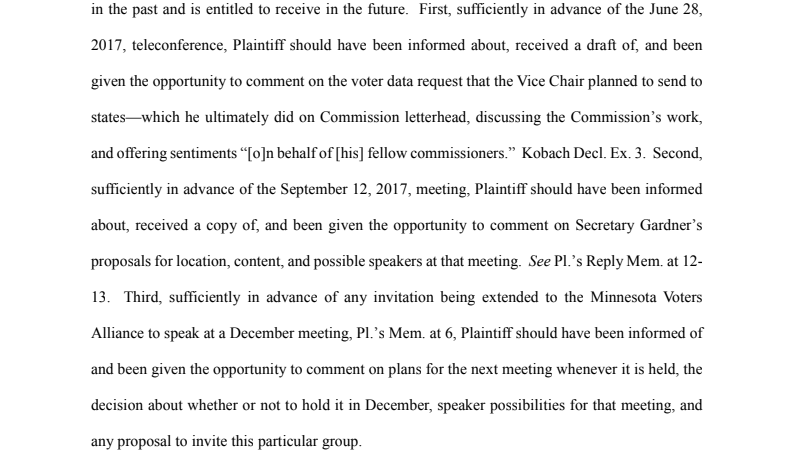 “Plaintiff ultimately should receive relevant documents that any of the former commissioners generated or received. This includes material that commissioners solicited and subsequently received from third parties,” the judge said, adding that her order included relevant records generated after the December order.

She said, however, that the commission need not turn over documents “exclusively” concerning management of the commission’s records.

“The Court is aware that Mr. Kobach’s reputation for candor to the tribunal and compliance with its orders is less than sterling,” Kollar-Kotelly said, pointing to the sanctions and the contempt-of-court finding that arose in the litigation over his proof-of-citizenship voter registration requirement in Kansas.

“But the Court is not prepared to assume that Mr. Kobach would disregard the White House’s requests when other Defendants—and he too, if the Court finds that he remains a Defendant—are at risk of contempt if they irresponsibly lose documents to which the Court finds that Plaintiff was entitled under the December 22, 2017, Order,” she said. “Should it come to light that Mr. Kobach has Commission documents that he has not provided to other Defendants, and that other Defendants do not have their own copies of such documents, then Plaintiff may seek further relief from this Court as appropriate.”

Read her opinion below: