How a landscape contractor from Connecticut ended up involved with Giuliani in Ukraine on behalf of the President of the United States was not immediately clear from the late Wednesday document dump.

“Wow. Can’t believe Trumo (sic) hasn’t fired this bitch. I’ll get right in that,” Hyde wrote in one March 22 message to Parnas, after the Giuliani associate sent Hyde links to articles by The Hill columnist John Solomon disparaging the ambassador.

Hyde provided Parnas with updates on Yovanovitch throughout the week that Solomon released a bevy of articles laying out unsubstantiated allegations against the ambassador and the Bidens.

It is unclear from the messages how or why Hyde became involved in the scheme.

The communications do suggest that Hyde was trying to ingratiate himself with Parnas, who appears to have ignored much of the Connecticut businessman’s repeated, haranguing attempts to elicit a response from the Giuliani underling.

“She under heavy protection outside Kyiv,” Hyde wrote in a follow-up message to Parnas, who replied: “I know crazy shit.”

Three days later, on March 25, Hyde wrote to Parnas that “they are moving her tomorrow.”

“The guys over they asked me what i would like to do and what is in it for them,” Hyde wrote, adding in a subsequent message: “She’s talked to three people. Her phone is off. Computer is off.”

Parnas replied periodically, telling Hyde that something was “interesting” or that knowing when Yovanovitch would be “on the move” was “perfect.”

Hyde continued to provide Parnas with updates on Yovanovitch’s movements during the last week of March, as Solomon continued to release articles, sourced to Ukrainian officials, attacking Yovanovitch.

“They are willing to help if we/you would like a price,” Hyde wrote in another March 25 text. “Guess you can do anything in the Ukraine with money … what I was told.”

Hyde also referred to having “a person on the inside,” telling Parnas at one point: “she will not be moved special security unit upgraded force on the compound people are already aware of the situation my contacts are asking what is the next step because they cannot keep going to check people will start to ask questions.”

Parnas replied less frequently, and did not appear from the messages to reply to a March 29 text from Hyde saying “Hey brother do we stand down??? Or you still need intel be safe.”

“She had visitors,” Hyde added.

It’s not clear if Hyde’s statements had any basis in reality, or if the Connecticut landscaper was bluffing about his ability to set a tail on the U.S. ambassador in Kyiv.

Joseph Bondy, an attorney for Parnas issued a statement to TPM “categorically” denying “that Lev was involved in any activities with Hyde to surveil the ambassador and try to harm the ambassador. We believe Mr Hyde’s activities to be a reflection on his dubious mental state.”

“Needless to say, the notion that American citizens and others were monitoring Ambassador Yovanovitch’s movements for unknown purposes is disturbing,” Lawrence S. Robbins, an attorney for Yovanovitch, told TPM in a statement. “We trust that the appropriate authorities will conduct an investigation to determine what happened.”

Hyde dismissed the texts on Twitter as laughable, and referred to House Intelligence Committee Chair Rep. Adam Schiff (D-CA) as a “desperate turd playing with this Lev guy.”

How low can liddle Adam Bull Schiff go? I was never in Kiev. For them to take some texts my buddy’s and I wrote back to some dweeb we were playing with that we met a few times while we had a few drinks is definitely laughable. Schiff is a desperate turd playing with this Lev guy.

Hyde made a splash in the 2020 Connecticut Republican primary as a rare breed of outsider candidate: a fervent Trump supporter willing to contribute thousands of his own dollars to the cause, while also reportedly failing to pay thousands of dollars in child support. Hyde tweeted on Wednesday that he had, in fact, paid off his child support.

The Connecticut landscaping contractor’s commitment to the Trump brand went further, however. 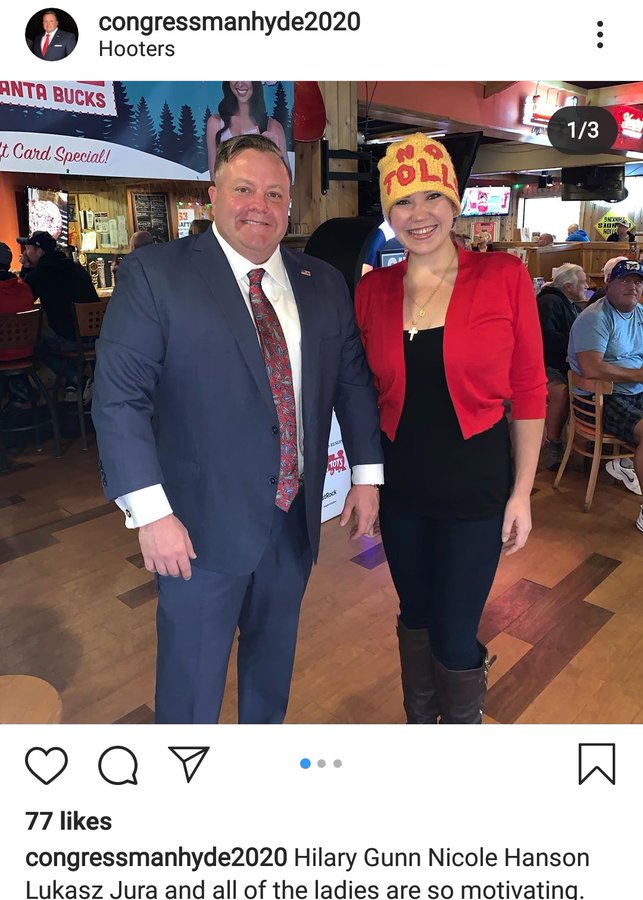 Mother Jones reported on Tuesday that the proprietor of the tragically deactivated CongressmanHyde2020 Instagram account was involuntarily committed by Florida authorities after suffering a breakdown at the Trump Doral resort in Florida in May 2019.

Hyde reportedly told police that he feared for his life, expressing terror.

“I’m not a traitor or a colluder or a conspiracy theorist,” Mother Jones reported Hyde as saying. “Eff you and your intelligence agencies or whatever or whoever was or is effing with me.”