Shortly after police say Alek Minassian plowed a rental van down a Toronto sidewalk Monday, killing 10 people and injuring 15 others, a Facebook post circulated in which he appeared to praise Elliot Rodger, the 22-year-old Californian who blamed his 2014 killing spree on his rejection by women.

“All hail the Supreme Gentleman Elliot Rodger,” the message read in part.

Canadian law enforcement acknowledged in a Tuesday press conference that Minassian “is alleged to have posted a cryptic message on Facebook minutes before” he got into the vehicle. And Facebook confirmed to outlets including TPM that the since-deleted account belonged to the suspect.

Many important details about the case are still unknown, and extremist experts noted that it’s odd that the post contained no other messages expressing an affiliation with the misogynistic, hateful ideology Rodger espoused. But they also told TPM that Rodger has become an icon among the most extreme members of the men’s rights and “incel,” or “involuntary celibate,” communities. And they said they wouldn’t be surprised if Rodger inspired the gruesome Toronto attack.

“For a certain segment of misogynists, Elliot Rodger is like the Columbine killers,” Brian Levin, director of the Center for the Study of Hate and Extremism at California State University San Bernardino told TPM.

“We have a subculture of misogyny that has its glorified leaders, its folklores, its treatises,” Levin added.

One of the most influential of those treatises was left by Rodger. In the weeks and days before he fatally stabbed his roommates and went on a shooting spree on the University of California Santa Barbara campus in May 2014, Rodger spent a great deal of time on the Internet. His now-defunct YouTube and Facebook accounts were filled with first-person monologue videos in which he expressed envy for men who were successful with women. He posted heavily on Bodybuilding Forum and PuaHate.com, a site that took aim at the “pickup artist” community, about his visceral loathing of women.

Immediately before heading to the Alpha Phi sorority house to begin his massacre, Rodger, who committed suicide during the rampage, uploaded a video about his plan to “punish” women for rejecting him romantically, calling himself “the supreme gentleman.”

As the blogger David Futtrelle documented, since the Toronto attack, some users on the Incels.me forum were quick to herald Minassian as a Rodger successor.

“Alek Minassian. Spread that name, speak of his sacrifice for our cause, worship him for he gave his life for our future,” one post read.

Another post saying Minassian “went ER,” a reference to Elliot Rodger, said he “could be a new saint.”

As with all forum threads, it’s difficult to tell which posts are sincere and which are just trolling. By Tuesday evening, several posts complained that they’d been “infiltrated” by “normies” drawn by media coverage of Minassian’s alleged ideology who were creating bogus accounts.

But even before Toronto, Rodger was being lionized in the darkest corners of the “incel” and far-right communities, Keegan Hankes, a senior intelligence analyst at the Southern Poverty Law Center, told TPM.

That’s in part because he left behind a violent, racist, 107,000-word manifesto called “My Twisted World” expressing his desire to watch women starve to death in concentration camps.

“Leaving long documents, long online footprints for people who love to dive into this stuff and get conspiratorial helps that legacy grow,” said Hankes, who co-authored an exhaustive report for the SPLC that labeled Rodger the first “alt-right” killer.

On forums like Reddit, posts have proliferated — some hiding behind irony, some sincere — calling Rodger the “supreme gentleman” and “saint Elliot.” Users have praised him as “the only one who ever stood up for us” and lamented that he was unable to “take more people with him.” (Reddit took down the incel channel several months ago).

One of those fans was William Atchison, the 21-year-old who killed two students and himself at a New Mexico high school last December. Atchison surfed the web using the pseudonym “Elliot Roger” and wrote posts praising the “supreme gentleman.”

Observers of these communities note that not all “incel” adherents embraced Rodger and that there are divisions between the “incel” and broader men’s rights activist community.

As the journalist Arshy Mann put it in a Tuesday Twitter thread: “MRAs deploy a human rights framework to argue men are oppressed. Incels don’t talk about rights, they just hate.”

These amorphous extremist groups are hard to characterize. Some “incels” are racists; some gamers are men’s rights activists; many members of the “alt-right” and white nationalist community express virulently misogynist views but have nothing to do with these two groups.

But the connective tissue between self-identified “incels” and men’s rights activists is a deeply misogynistic worldview that embraces physical and sexual violence against women.

“The Incel Rebellion has already begun!” it reads.

“We will overthrow all the Chads and Stacys,” it continues, using “incel” slang for stereotypically attractive, sexually active men and women. “All hail the Supreme Gentleman Elliot Rodger.” 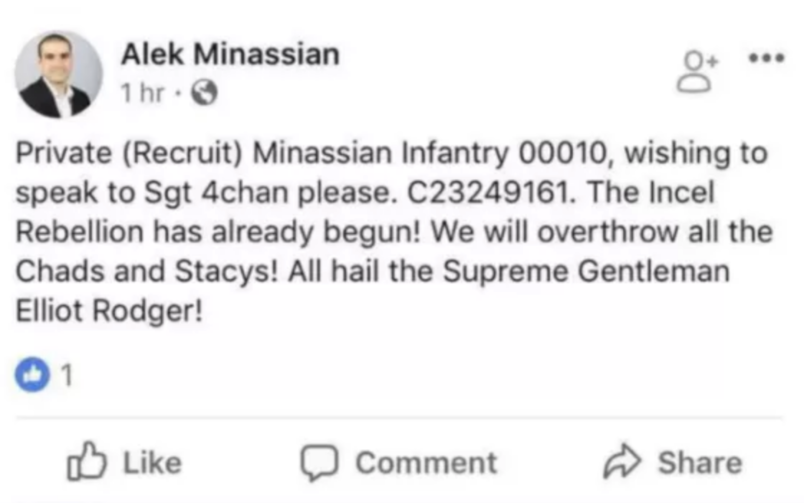 Extremist experts say shining a brighter light on the violent fixations of some members of this community is essential.

Plenty has been written about the link between the perpetrators of domestic violence and the overwhelmingly male individuals who carry out mass shootings or terrorist attacks. But while media and law enforcement are primed to look for criminal suspects’ racial, religious or political bias, they’re less likely to see gendered hatred in itself as a motivator for violent rampages.

The Minassian attack “really highlights the need to take a more gendered lens when we consider extremism and terrorism,” said Barbara Perry, hate crime expert at University of Ontario’s Institute of Technology.

Allegra Kirkland (@allegrakirkland)  Allegra Kirkland is a New York-based reporter for Talking Points Memo. She previously worked on The Nation’s web team and as the associate managing editor for AlterNet. Follow her on Twitter @allegrakirkland.
Have a tip? Send it Here!
includes:
white nationalism
Dear Reader,