Grant Stinchfield, a host on the National Rifle Association’s video platform NRATV, said Friday that he was only joking when he suggested North Korea point its missiles at Sacramento instead of the American territory of Guam.

“Let’s send a note to North Korea that Sacramento changed its name to Guam!” Stinchfield wrote, in a tweet that was later deleted. 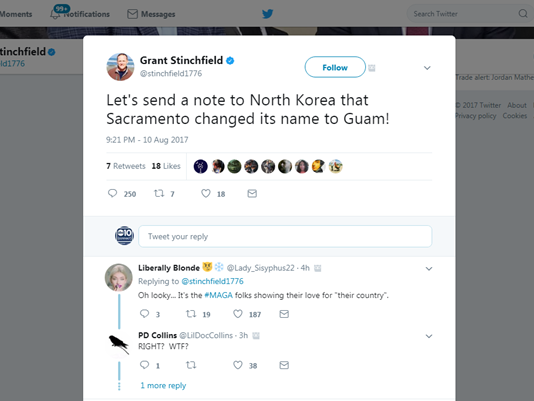 “It was meant as a joke and I regret it,” Stinchfield later told the New York Daily News over the phone.

Amid rising U.S. tensions with North Korea over its gradual development of nuclear weapons capabilities, the country threatened to surround the Guam with an “enveloping fire.”

It wasn’t immediately clear why Stinchfield named Sacramento as his preferred target. The Daily News suggested he may have meant it as a criticism of California’s strict gun laws, as Sacramento is the state’s capital.

NRATV, with gun-friendly Republicans controlling nearly every aspect of the federal government and most statehouses, has focused its programming on sometimes completely gun-free topics, like the New York Times and the moral requirement to combat progressives with the “clenched fist of truth.”