The Trump administration released guidelines Thursday morning for states seeking to impose work requirements on their Medicaid population—a move expected to reduce Medicaid enrollment by hundreds of thousands of people.

Under the new policy, states can require able-bodied adults to either work, volunteer, attend job training or prove they’re actively searching for a job to qualify for Medicaid. People with a disability, the elderly, children and pregnant women are exempt.

Seema Verma, the administrator of the Centers for Medicare and Medicaid Services (CMS), told reporters on a conference call Thursday morning that 10 states have already applied: Arizona, Arkansas, Indiana, Kansas, Kentucky, Maine, New Hampshire, North Carolina, Utah and Wisconsin. Some of these states had previously sought permission from the Obama administration to purge non-working adults from their Medicaid rolls, and were denied.

Though very few people are likely to be impacted, congressional Democrats and health care advocates say the work requirement violates the original purpose of Medicaid and traps people in a Catch 22—too sick to work, but unable to get care unless they are working.

Here are five things to know as the state waiver approvals start rolling out:

The majority of adult Medicaid recipients who do not have a legally recognized disability are already employed, according to research by the Kaiser Family Foundation in 2016. Most Medicaid enrollees who work do so full-time for the full year, yet they work in low-paying sectors where they are not offered employer-sponsored health insurance, and do not make enough to afford private insurance on the individual market.

Of those who are not employed, the study found, more than one-third said they had an illness or disability that prevented them from working, though not one recognized under the strict federal disability benefit guidelines. For example, more than two-thirds of that group say they have two or more chronic conditions such as arthritis or asthma.

Just 3 percent of the unemployed adult Medicaid population did not give a reason for not working. 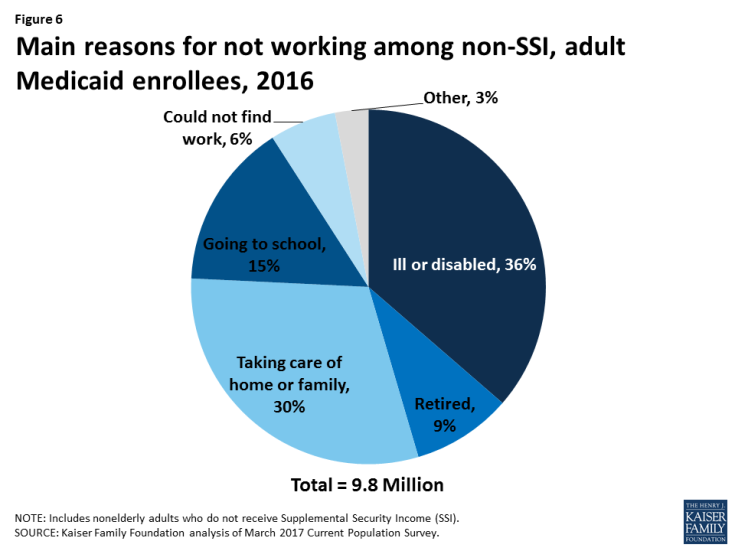 A more recent study focusing on Michigan, published in December, found that unemployed Medicaid beneficiaries “were more likely to be older (aged 51 to 64 years), more likely to be in fair or poor health, have a chronic mental health condition, or a physical or mental functional limitation.”

Jessica Schubel, a former senior policy adviser at CMS who now works for the progressive think tank Center on Budget and Policy Priorities, says that because most people on Medicaid do or cannot work, the Trump administration’s new rules are an answer to “a problem that doesn’t exist.”

“It’s just an ideological maneuver,” she said. “After Congress’ failure to cut and cap Medicaid, this is a step to further the Republican attack on the program.”

Elliot Fishman, who led CMS’ work on Medicaid waivers from 2013 to 2017, says the new policy is a dog-whistle to the Republican base, promoting untrue stereotypes about low-income people. But even as an ideological message, he told TPM, it has the power to dramatically reduce Medicaid enrollment, even among people who meet the new requirements.

“You’re going to lose not just the people who don’t meet the requirement but also those who can’t get through the new bureaucratic process,” he said. “Our experience over decades of research is that any time you require new documentation, you lose a lot of people who in principle shouldn’t be losing eligibility.”

Medicaid has never had a work requirement in the program’s 50-plus year history.  Other federal programs that have implemented such a requirement found that it did nothing to increase employment.

A study of the Temporary Assistance for Needy Families (TANF) cash assistance program found that after five years, people subject to a work requirement were not any more likely to be working. The study also found that it was burdensome and expensive for states to implement the requirement.

Another study of work requirements for federal food stamps also found that the majority were already working, but many “face difficulty documenting their work hours for purposes of compliance,” while work requirements in federal housing assistance resulted in “no increase in average hours worked.”

Trump supporters will be among those hardest hit

The governors most likely to seek Medicaid waivers to implement work requirements represent states that Trump won in 2016. According to the Kaiser Family Foundation, southern states already have the lowest percentage of Medicaid recipients who are currently employed, making more people in those Trump-supporting states at risk of losing benefits under the new rule.

Rural families, who overwhelmingly supported President Trump, are also especially vulnerable. According to a report from Georgetown University in 2017, nearly half of children living in rural areas are covered by Medicaid, versus 38 percent in urban areas.

Additionally, several GOP-controlled states seeking the waiver, including Kentucky, Indiana, Maine and New Hampshire, are currently dealing with an opioid epidemic, and many public health officials fear the new rules could be a serious barrier for people struggling with addiction to get the treatment they need in order to work.

As she unveiled the new work requirement guidelines Thursday morning, Verma posted a study on Twitter from 2006 showing that people who moved off of government benefits into paid employment experienced better physical and mental health.

There are just a couple problems with citing this study to justify the new Medicaid work requirements. For starters, the study was conducted in England, which has universal, nearly free health care for all residents regardless of whether or not they are employed. Secondly, Verma is equating health insurance with a completely different form of government aid. Medicaid is not a viable alternative to paid work. It provides no monetary support for people to live on.

“They’re trying to frame Medicaid as a welfare-type public assistance benefit instead of a health insurance program for 70 million people from all walks of life,” Fishman said.

Pointing to the surprising resilience and popularity of Medicaid, which people turned in droves to defend last year from GOP bills that would have made deep cuts, he added that the administration’s new rhetoric around the work requirements “is an effort to change the new reality of the political power of the Medicaid program.”

Additionally, experts say, while employment certainly correlates with better health and happiness, the causality is not clear. It’s very possible that rather than Verma’s thesis that work improves people’s health, people who are already mentally and physically healthy have an easier time finding employment. Barring them from Medicaid, in that case, would make their entry into the job market even more difficult.

There will be lawsuits

As soon as news broke in the summer of 2017 that efforts were underway in Trump’s HHS to allow states to seek Medicaid work requirements, groups began preparing to sue.

Several former HHS officials who spoke to TPM said they expected the lawsuits to drop as soon as the federal government starts approving state waivers with work requirements, which could come as soon as Friday or early next week.

Fishman, who worked at CMS when the Obama administration denied requests from Arizona and New Hampshire to implement work requirements, said the lawsuits will likely focus on the argument that the new rules violate the original intent of Medicaid.

“The requirement for medicaid waivers is that they promote the objectives of the Medicaid program, and not just in the Obama administration, but in every previous administration, that was always understood to mean expanding coverage and strengthening the delivery of medical services. It has never been used to just cut back on coverage, which this is an effort to do.”

New!
Start your day with TPM.
Sign up for the Morning Memo newsletter
Alice Ollstein (@AliceOllstein)  was a reporter at Talking Points Memo, covering national politics. She graduated from Oberlin College in 2010 and has been reporting in DC ever since, covering the Supreme Court, Congress and national elections for TV, radio, print, and online outlets. Her work has aired on Free Speech Radio News, All Things Considered, Channel News Asia, and Telesur, and her writing has been published by The Atlantic, La Opinión, and The Hill Rag. She was elected in 2016 as an at-large board member of the DC Chapter of the Society of Professional Journalists. Alice grew up in Santa Monica, California and began working for local newspapers in her early teens.
Have a tip? Send it Here!
Latest Five Points
Comments
Masthead Masthead
Founder & Editor-in-Chief:
Executive Editor:
Managing Editor:
Associate Editor:
Investigations Desk:
Reporters:
Editor at Large:
General Counsel:
Publisher:
Head of Product:
Director of Technology:
Associate Publisher:
Front End Developer:
Senior Designer: