The log of 2,319 text messages that Mark Meadows turned over to the House select committee investigating the Jan. 6 attack serves to document an expansive plot to reverse former President Trump’s loss in the 2020 election that dozens of members of Congress eagerly participated in. However, they also provide a glimpse into the day-to-day rivalries and cutthroat culture of the Trump White House, where Meadows served as the last chief of staff. One set of text messages from former Secretary of the Interior Ryan Zinke is a particularly vivid example of Trump-era backstabbing and maneuvering. 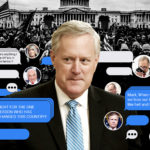 Trump’s administration had a record amount of turnover as the president regularly fired Cabinet secretaries and top aides when they crossed him or were consumed by scandal. The end result was an infamous snakepit where rival camps regularly took shots at each other as they sought to rise through the ranks and maintain the mercurial president’s favor.

Zinke has been described as “one of the most ethically dubious members” of the Trump Cabinet due to the more than a dozen federal investigations that were sparked by his conduct. He resigned in 2019 amid the barrage of negative headlines. Texts Zinke exchanged with Meadows seem to capture him in the midst of attempting to get back into the fold.

The former secretary began his power-play pitch to Meadows on Election Day, Nov. 3, 2020. The message includes an apparent misspelling of the word “portrait” and Zinke’s last initial as a signature.

On the eve of victory. Keep the faith. In Vegas for the celebration. Portato unveiling on 10 December at Interior. Potus is going to need some warriors around him in his second term. The fight for freedom never ends. Z

Zinke, who did not respond to a request for comment, unveiled his official portrait at the Department of the Interior on Dec. 10, 2020. It featured a dramatic image of Zinke on horseback in front of a national monument with which he had a decidedly fraught history. The ceremony also included an “unofficial” portrait where Zinke’s head was superimposed on “Death Dealer VI,” a painting by renowned sci-fi/fantasy artist Frank Frazetta. The resulting image featured Zinke waving an ax and riding into battle against a massive serpent. Epic stuff.

Based on the text log, six minutes after his message to Meadows, Zinke followed it up with an even more explicit push to get back in the Cabinet.

Keep America Great! Post election, sec def and a few others need to go. Let me know if you need an acting to fill in as required. The fight for freedom never ends. Z

The text message log provided to the Jan. 6 committee doesn’t contain any response from Meadows to Zinke’s offer.

For this series on Meadows’ text log, we are relying on the identifications of those texting with Meadows that were made by the committee’s investigators. TPM independently identified Zinke’s number through public records searches. Meadows and the committee did not respond to requests for comment. To read more about the story behind that text log and our procedures for publishing the messages, check out the introduction to this series.

Zinke’s second text to Meadows made an apparent reference to former Secretary of Defense Mark Esper, who had clashed with Trump over, among other things, the president’s eagerness to send troops into the streets during nationwide civil rights protests in 2020.

Trump did indeed announce that Esper had been “terminated” on Nov. 9, 2020, six days after Zinke’s message. The former president appointed another DOD official, Christopher Miller, to serve as acting secretary of defense. Zinke did not get the job.

While his effort to lead the Pentagon may have failed, Zinke has since punched a return ticket to Washington. Last month, Zinke won an election to represent Montana’s western district in the U.S. House of Representatives. Trump’s eager warrior is set to take office on Jan. 3.