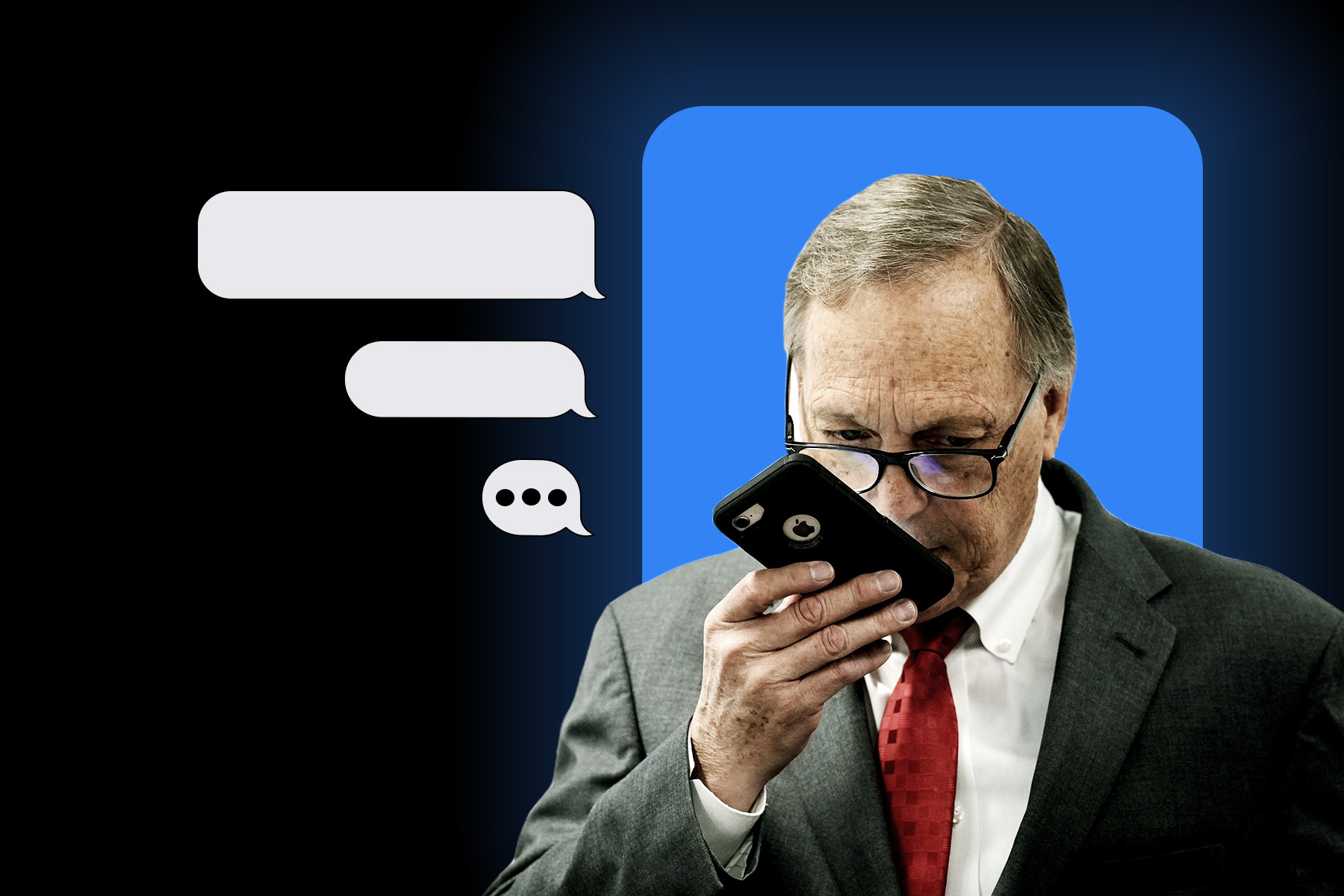 The election-night exchanges between Rep. Andy Biggs (R-AZ) and former White House Chief of Staff Mark Meadows on Nov. 3, 2020, read like any other conversation between a campaign stakeholder and his ally in a battleground state. They were watching the returns, hyper-focused on ballot batches and voting patterns. Biggs, who at the time was the chairman of the far-right House Freedom Caucus, was confident the election was going Trump’s way in Arizona.

But the record of texts between the two took a darker turn over the next few weeks as other networks followed the early projection from the Fox News decision desk and called the Grand Canyon State for Joe Biden. Even as Meadows and Biggs both seemingly acknowledged that the numbers looked grim for their man, they schemed together to put pressure on Arizona officials and to devise plans to challenge the election results.

Meadows’ conversations with Biggs during the period from Election Day until Biden’s inauguration on Jan. 20, 2021, are part of a tranche of communication Meadows turned over to the House select committee investigating the Jan. 6 attack. TPM has obtained the text log, which includes messages exchanged between Meadows and at least 34 members of Congress discussing efforts to overturn Trump’s election loss. For this series, The Meadows Texts, we are relying on the identifications of those texting with Meadows that were made by the committee’s investigators. To read more about the story behind that text log and our procedures for publishing the messages, check out the introduction to this series.

Based on the log, Biggs was one of Meadows’ most frequent congressional correspondents, with the pair exchanging 63 messages. Biggs’ number was identified by committee investigators and independently confirmed by TPM. He did not respond to a request for comment. Biggs’ communications with Meadows paint a picture of two increasingly desperate men, grasping at fantastical conspiracy theories when the real votes did not produce a Trump win.

As Arizona slipped further from Trump’s reach, their texts became increasingly frantic. Late on election night, Fox News called the state for Biden. It was the first network to do so, and its decision prompted outrage on the right. While that projection eventually proved correct, other major decision desks were not yet ready to call the state. Biggs messaged Meadows with a plea: “Whatever happens no one can concede.”

So, Fox called bu this is the situation that has been reported to me: outstanding ballots are600-700K statewide. Those are dropped off and day of votes. Fox doesn’t know what they are doing. Too many votes. Probably one more report tonight.

Mark they will start counting in Maricopa county tomorrow morning at 7:30 AM and they will go and release only one report at the end of the day. Whatever happens no one can concede because the president will win the state. After you and I talked another 10,000 votes came the presidents way so please make sure no one in the campaign or press office says anything about conceding in Arizona because I am very confident that as this thing goes President Trump is going to win

On Nov. 6, as the votes were still being counted, Meadows wrote Biggs looking for any reason to be optimistic.

“Any hope for Az,” Meadows asked.

“I’ve been trying to get hold of our legal and party teams in Arizona,” Biggs replied, before scratching off his calculations of how much of the outstanding vote Trump had to win to come back. “So still doable,” he concluded.

But things were bleak for Trump and his allies. The Associated Press made its call several hours after Fox and the other major broadcast networks caught up in the next few days. By Friday, when Meadows was looking for a silver lining in Arizona, NBC, ABC and CBS had all projected Biden as the state’s victor.

Less than eight hours after he indicated an Arizona victory was still “doable” for Trump, Biggs had begun cooking up a plot to challenge the results in the state.

I’m sure you have heard of this proposal. It is to encourage the state legislatures to appoint a look doors in the various states where there’s been shenanigans. If I understand right most of those states have Republican Legislature’s. It seems to be comport with glorified Bush as well as the Constitution. And, well highly controversial, it can’t be much more controversial than the lunacy that were sitting out there now. And It would be pretty difficult because he would take governors and legislators with collective will and backbone to do that. Is anybody on the team researching and considering lobbying for that?

Through the typos, Biggs seemed to be floating a variation of the fake electors scheme, a gambit where Trump allies would put their names to an alternate slate of electors that could be approved by Republican lawmakers in states Biden won. Versions of the plot became popular among members of the Trump camp as legal avenues to overturn the 2020 election dwindled, and the idea that Trump electors could be swapped in for Biden electors was key to Trump allies’ growing interest in the day when electoral votes would be counted and certified, Jan. 6. The fake electors schemes have led to multiple investigations.

On Nov. 6, Meadows was succinct in response:

While the two continued to track the numbers and tried to calculate the outstanding vote share in the state, it was clear that the door was closing. Even as they seemed to acknowledge the real results, the pair took a turn toward the tin foil-hatted and set aside the vote counts in favor of increasingly bizarre conspiracy theories that could help Trump clinch Arizona anyway. Biggs’ initial text with the “highly controversial” idea was previously published by CNN.

However, it is just one of several messages where Biggs proposed last-ditch, conspiracy-theory-fueled schemes to wrench back the state. Most of those messages are being reported here for the first time.

On Nov. 7, the day after he suggested the plan to have Republican-controlled state legislatures essentially throw out the results, Biggs sent Meadows another text urging Trump not to give up.

“Please don’t let the President concede. We must exhaust all options,” he wrote.

Trump — and Biggs — then set their sights on Arizona Republican Gov. Doug Ducey, who had been an ally of the former president. On Nov. 8, Biggs indicated he had spoken directly with Trump, who had asked him to reach out to Ducey. The plan was apparently not a success.

Hey Mark the president asked me to call Governor Ducey I did and Ducey won’t talk to me he will only let me talk to his Chief of Staff. But based on hints that were given to me looks like the governor wants to punch this to county board of supervisors. I did talk to the legal team and as a result I’ve placed some calls to the board of supervisors without connecting so far. I’ll keep trying

In the days after Biggs’ effort to contact the governor, as he continued monitoring and expressed frustration about the pace of returns, Biggs also seemed to acknowledge there were not enough real votes for Trump to win.

How many total ballots left

Wait all day for 5k ballots… This is inexcusable.

Still more than 40k provisional ballots and about 7.5k other ballots. Question is how many provisionals are valid

With the numbers going against them, Biggs dashed down the conspiracy rabbit hole. On Nov. 12, he wrote Meadows to advise him of a contact who wanted “to talk about dominion software.” Dominion Voting Systems and its beleaguered employees found themselves at the center of a MAGA-fueled firestorm when Trump’s allies and acolytes baselessly hypothesized that the voting hardware and software company had provided machinery that flipped Trump votes to Biden. Employees received floods of death threats, and the company ultimately lodged a $1.6 billion defamation suit against Fox News, and separate lawsuits against other far-right news networks and Trump allies, for giving the lie life.

That same afternoon, Meadows seemingly set his sights on another local Republican to press for help. He asked Biggs to pass along contact information for Arizona Attorney General Mark Brnovich. Biggs was happy to oblige.

Can you get me the attorney general of Arizona phone number

The following day, Biggs suggested a new scapegoat in the form of undocumented immigrants, proposing to challenge the totals on the premise that immigrants had somehow fraudulently voted in great enough numbers to swing the election.

So one of the remedies that may still be left is to enjoin the certification of the election based on the Fed only ballots. If we can’t get the investigation done in time for that, we should make sure we have it done in time and can demonstrate that a significant number of illegal aliens votes in the election so that the legislature, when called into certify the electors, can reject them based on fraud. What do you think?

Meadows was also amenable to this scheme.

As the month wound down, the pair mused over the “number of native Americans in Arizona.” Meadows also asked Biggs to get him Ducey’s cell phone. On Nov. 22, Biggs offered one more idea to reverse Trump’s loss: a plan to “audit” ballots, an idea he indicated he was exploring with Arizona Republican Party Chairwoman Kelli Ward.

Also I am talking with Kelly Ward about the so-called adjudicated ballots. That’s the 130,000 ballots she’s talking about. I’m trying to get to the bottom of the process and see if there’s a way we can audit those

At this point, even Biggs seemed to realize their chances were slim.

“Don’t hold out false hope on that,” Biggs added. “But there is a glimmer potentially there but we shouldn’t get overhyped on it.”

By the end of the month, all that was left was the Trump legal team led by Rudy Giuliani, en route to Arizona for a rally. In a Nov. 29 message to Meadows, Biggs derisively referred Giuliani and his colleagues as “the circus.” But Biggs was clearly willing to join the sideshow.

“Hey Mark, the circus is coming to town tomorrow and I wanted your input. Giuliani and company will be in downtown Phoenix,” Biggs wrote. “I’m planning on being there. Anything I should look out for your address when I speak to the crowd?”

The following day, Nov. 30, Giuliani and his team held what they dubbed a “hearing” at a hotel in downtown Phoenix. In a recap of the session, the Arizona Republic newspaper noted that, despite the title, it was “not an official legislative event” and that Biggs and Rep. Paul Gosar (R-AZ) were seated behind Giuliani as various witnesses cast doubt on voting machines and ballot counting. Meanwhile, a few blocks away, as Giuliani’s “hearing” was underway, Ducey and Brnovich were together at the state’s Capitol certifying the election results. When Trump called the governor during that ceremony, he did not pick up.

Have a tip? Send it Here!
Kate Riga (@Kate_Riga24)  is a D.C. reporter for TPM and cohost of the Josh Marshall Podcast.
Hunter Walker (@hunterw)  is an investigative reporter for Talking Points Memo. He is an author and former White House correspondent whose work has appeared in a variety of publications including the New Yorker, Rolling Stone, and New York Magazine. He can be reached at [email protected]
The Meadows Texts
Comments
Masthead Masthead
Founder & Editor-in-Chief:
Executive Editor:
Managing Editor:
Associate Editor:
Investigations Desk:
Reporters:
Editor at Large:
General Counsel:
Publisher:
Head of Product:
Director of Technology:
Associate Publisher:
Front End Developer:
Senior Designer: