3 hours ago
In Attempt To Clear Up GOP Stance On Spending Cuts, Roy Declares Military Should Be ‘Killing People And Blowing Stuff Up’

24 hours ago
Why On Earth Are Some MAGA Republicans Wearing AR-15 Pins?

Let me share with you some details of my investigation of a truly inconsequential and yet to me somehow fascinating mystery. Yesterday, in the midst of the shock over President Trump’s sudden decision to cancel the North Korea summit in Singapore, I saw an image on Twitter about The White House Gift Shop website selling those summit “challenge coins” with the profiles of President Trump and Kim Jong-un. I went to the White House website to see if this could possibly be true. Does the White House really hawk souvenirs on its website? Even under Trump? I soon realized that everyone was talking about a separate White House Gift Shop website, under its own domain name, which looked pretty rickety to me and left me not at all sure it had anything to do with the White House.

Then a short time later I saw a chyron on MSNBC announcing that the White House was in fact still selling the summit challenge coins even as the summit had been called off. I did a double-take because my initial take made me think that the “White House Gift Shop” wasn’t actually part of the White House or even the U.S. government. But with MSNBC saying this was the White House I decided I needed to figure out what was going on.

When I first looked at the site all the pages but the front page were broken. The products I saw weren’t exactly MAGA caps. But they seemed a bit more partisan and campaigny and cheesy than I’d expect from any U.S. government website. [Scratch that: The Gift Shop actually does sell a MAGA cap.] (In fairness their archived Obama gifts were at least a bit campaigny.) 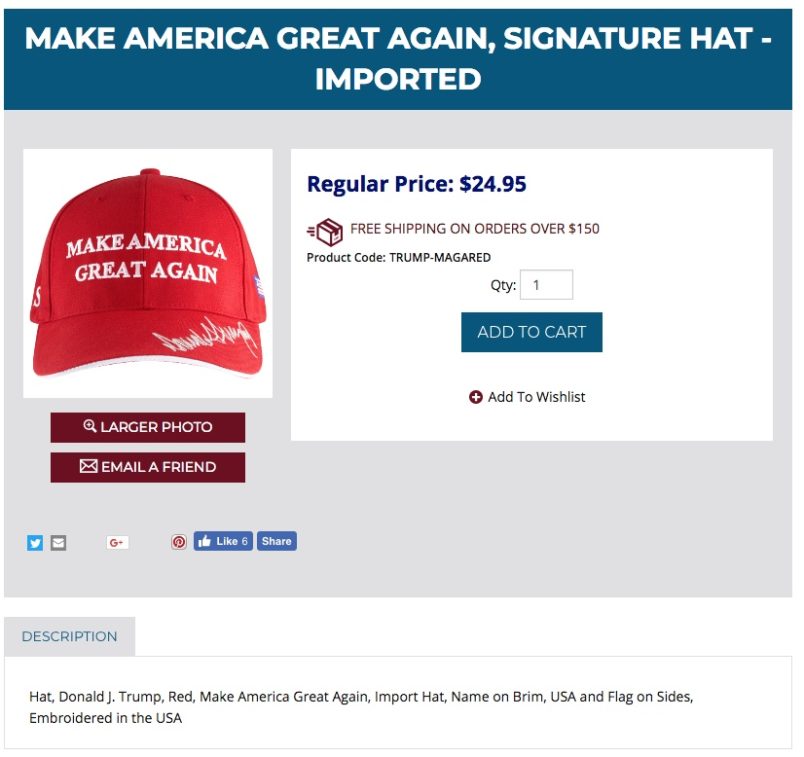 Even with all this though, there was a usa.gov label at the bottom of the site which I usually take (rightly or wrongly) to signify a website that exists under the auspices of the U.S. government and runs on its networks. 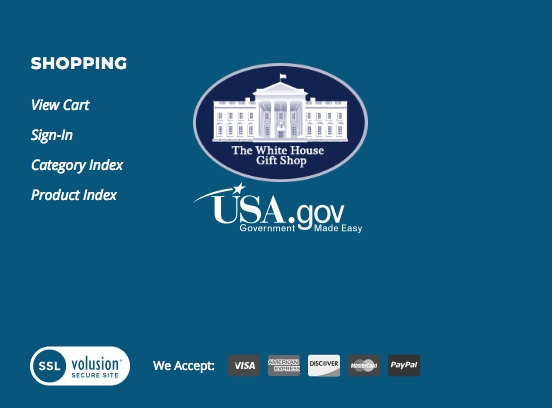 So what was the story?

I called up the number on the website and asked the simple question: Is the “White House Gift Shop” something actually run by the U.S. government? Or the White House? The answer I got wasn’t totally clear. I was told that it used to be housed within the actual White House but that now it was only a website.

But was it part of the U.S. government? Run by the U.S. government? I tried to ask this in a way that communicated that I wasn’t suggesting anything untoward. It was just a straight-up factual question. The answer I got was odd and the woman I was speaking to didn’t necessarily seem to know or have the answer. She told me that it was founded by President Harry Truman and the Secret Service (more or less what you can find online).

When I asked again whether it was part of the U.S. government she said she had to go find a document and a short time later the phone disconnected. I called a few more times and kept getting voice mail. When I eventually got through a second time I again asked my question, didn’t get an answer but was told I would get a call back from the Executive Director.

I never got a call back.

One of the reasons the website was having so many problems yesterday was presumably because it was flooded with people trying to look at the summit challenge coin which was going at least semi-viral. The Post has a good write-up here on all the snarking about the North Korean Summit “challenge coin” which was (and still is) listed as a “Deal of the Day” for only $19.95.

A lot of the humor was tied to how the Gift Shop was leaning into the fact that the challenge coin was so awesome they were going to mint it whether there was a summit or not.

This White House Gift Shop statement about take-backs on Trump World Peace Coin pre-orders is HI-LARIOUS. It’s like, you can ask for your money back but you’ll regret it…? pic.twitter.com/jPOCp9FfnI

Still, the Post piece didn’t give me an answer on what The White House Gift Shop is or who runs or owns it. And neither did the lengthy and odd letter from the Gift Shop CEO which is now posted below the page where you can buy the coin.

So this morning, I was back at it to see if I could find out any more. I was finally able to open this page about the history of the Gift Shop. According to this page, the gift shop began as The White House Flower Fund and was later renamed The White House Benefit Fund. It was essentially a small service fund for members of what was then called the White House Police, forerunners of the Secret Service – basically, send flowers when some member of the force or someone in their family passed away. But on November 1st, 1950 Puerto Rican nationalists attempted to assassinate President Truman. Truman was living at Blair House, across the street from the White House, at the time because the White House was then undergoing a major renovation. (It was essentially gutted and rebuilt from scratch within the same shell.) Obviously, the assassination attempt failed. But one member of the White House Police, Leslie William Coffelt (genuine hero) was killed in the attack and two others (Donald Birdzell and Joseph Downs) were injured. 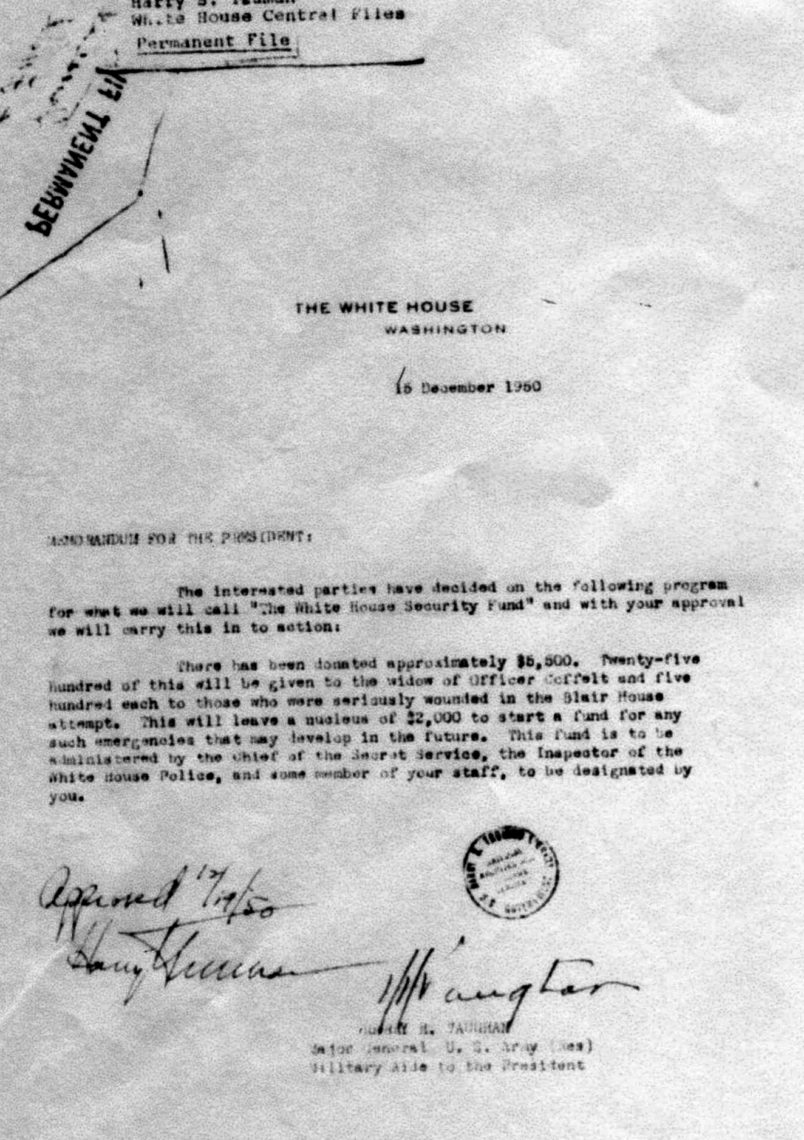 The site also notes that it has this trademark …

It’s still not completely clear when this became The White House Gift Shop. But the history page concludes with this paragraph …

So seemingly the Gift Shop is a private charity of some sort which supports small, local law enforcement agencies. But what is it and who runs it? And is it part of the U.S. government? The only detail on this specific question I could find was what I found when I looked up White House Gift Shop on the DC incorporations search website. WHITE HOUSE GIFT SHOP LLC (THE) is an LLC, File Number L48307. The listing shows an “effective date” of 2/24/2010 which is presumably the date of registration. But the Gift Shop’s current corporate registration status is listed as “revoked.” So that’s not good.

The CEO letter above is from Tony Giannini, who’s been the chairman of the Board of Directors of the Gift Shop since 2011 and is the CEO of what appears to be a defense contractor called Strategic Defense Systems. Before that he was the Executive Director of something called the United States Secret Service Fund which probably goes back to the Gift Shop’s origins as a fund tied to the White House security service.

So what has our investigation found? It seems pretty clear to me that The White House Gift Shop has no actual connection to the White House or the U.S. government. It seems like it either did or does have some sort of informal connection the Secret Service. But that’s not clear. Indeed, it’s not even clear it has a current legal status as a corporation.

[BREAKING: Read our new report. Mystery solved. The White House Gift Shop is a private, for-profit company based in Lancaster Country, Pennsylvania. It has no connection to the White House, the Secret Service or any part of the US government.]