In the last dozen years we’ve seen at least two and arguably three wave elections, with two tied to a midterm election: 2006, 2008 and 2010. They have certain common characteristics, along with others from earlier decades. One is that key patterns generally take shape or come fully into view at the end of the summer. Whether this is because our media and political cycles our designed to kickstart after the Labor Day holiday, whether it’s the shift from summer or just a certain proximity to election day that creates a critical mass of focused attention in the voting electorate, I’m not sure. But we are currently seeing a pattern that looks a lot like these earlier cycles, with a congealing trend coming out of late August into the first days of September.

What I mean here is not just that Democrats look set for a good mid-term election. It’s specifically what seems to be a trend starting in middle to late August, both in the President’s approval rating and in the congressional generic ballot. 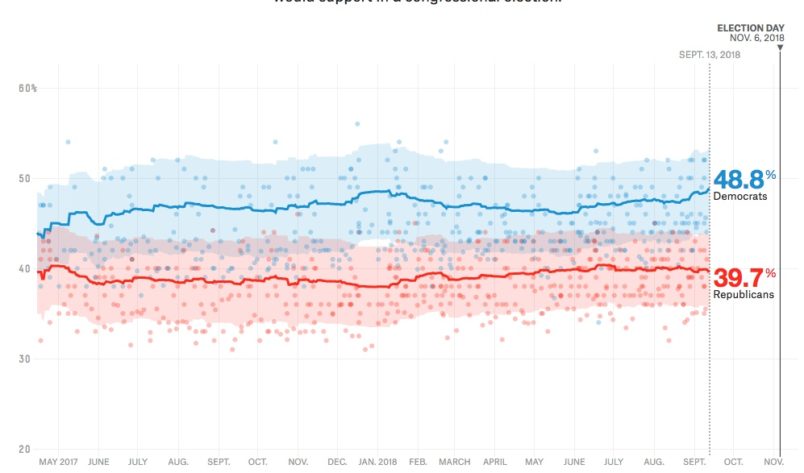 And here’s the chart for Trump … As you can see both start opening up, not dramatically but significantly, around the same time. Polls have changed so much over the last decade. But I still watch the premium media phone polls pretty closely – more closely than the online ones with distinct methodologies. About half a dozen have come out over the last week or so. Each has had the President down in the 30s percent support. August was a really bad month for the President. It’s not clear to me whether the decline in his levels of support were driven by the slew of bad news in August and early September or the seasonality and proximity to the election which I mentioned above. You can see the pattern even more clearly in 538’s predictive models for the House which has bulged about 20 points in the Democrats’ favor over the last couple weeks.

Yet another example of this comes in the Senate. It still seems unlikely that the Democrats will reclaim the Senate. But two or three weeks ago it was seen as close to impossible. Any blue wave notwithstanding, the map the Democrats are playing on is just too hard to do any more than lose as few seats as possible. In the last two weeks each of the election prognosticators I watched has shift from ‘no realistic chance’ to ‘there’s a path for the Democrats to win the Senate.’ That’s driven by surprisingly competitive races in Texas, Tennessee and to a less surprising extent Arizona along with surprisingly strong showings by Democratic senators in very red states.

Put it all together and opposition to the President and his party seem to be pivoting in a negative direction and just the wrong time, within the two month window in which the trend line tends not to change but rather intensify. Of course this trend could shift or simply hold in place where it is now. But my interest is in how and why it is catalyzing. Are people looking at the whole picture with different eyes now since we’re on the cusp of an election, sort of in the way undecideds often break in the final days of a campaign. Is it bad luck? That the election is coming on the heels of a string of really bad news for the GOP? In addition to just watching with the aim of trying to figure out what’s going to happen (normal campaign junkie activity), these other questions are very much on my mind.