The President Admits to Obstruction on National TV

This is an astonishing, shuddering moment. In his interview with Lester Holt, President Trump essentially admits to obstruction of justice. Details after the jump.

I’ve embedded the portion of the transcript here as an image file because it’s in a non-cut and paste-able format. 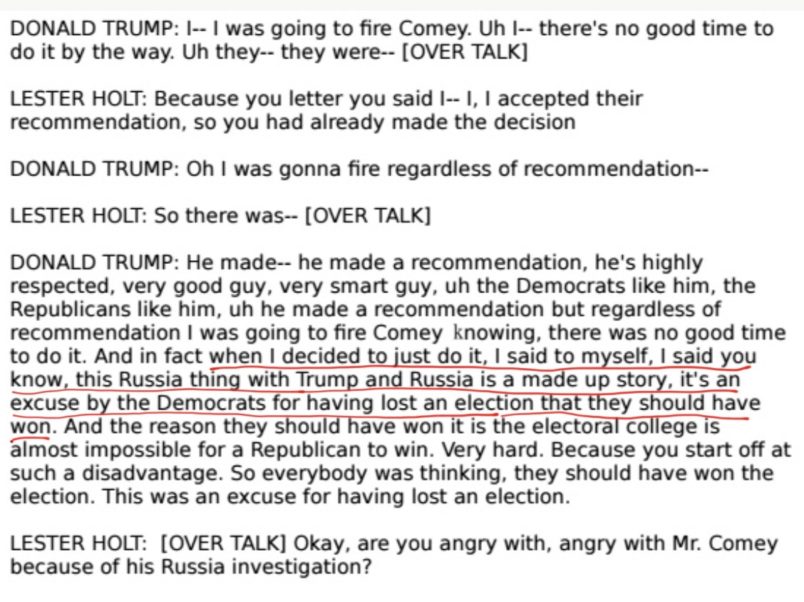 Because the circumstances of a President are so unique, I can’t say whether this fits the legal definition of obstruction. In any case, I’m not a lawyer. So I will leave it to lawyers to answer that question. But on the substance of why he fired James Comey and what he was trying to achieve, it could scarcely be clearer. He says that in the moment he was making the decision to fire Comey he was thinking about the Russia investigation, his belief that it was illegitimate (“a made up story”), and, implicitly, that he wanted to end it.

As much as I feel like I know this guy, as much as I put basically nothing past him, it is a bracing thing to see a sitting President admit such a thing on camera. It’s an example of something I think we know: Trump is so undisciplined, so controlled by his anger and desire to dominate and be right that he cannot help going off script, adopting what is perhaps his third or fourth version of this story, and admitting what I think has to amount to an impeachable offense.

He is saying what we know: that he fired James Comey to put an end to the Russia probe.