Here’s a pretty important wake-up call for those who may need waking up about the growth of support for ‘religious liberty’ exemptions as a tool to provide legal sanctuary for affirmative discrimination. A new poll from the Public Religion Research Institute (PRRI) shows the percentages of public support for certain kinds of discrimination under ‘religious liberty’ exemptions and how they’ve grown in recent years – and substantial numbers support exemptions to discriminate against Muslims and Jews.

Let’s start with gays and lesbians – the group around whom we’ve seen the most litigation – the evangelical baker who won’t bake a same sex marriage wedding cake, etc. In 2014 16% of Americans thought this was okay if it violated the small business owner’s religious beliefs. Today that’s 30%. The big growth is among Republicans (21% to 47%). But there’s significant growth among Democrats and independents too.

What about people who say they’re religious beliefs prevent them from offering their services to African-Americans? 10% in 2014 and 15% today.

Support for refusing service to Muslims is slightly higher than Jews – 22%. But the question wasn’t asked in 2014. So we don’t know the trend.

Here are the breakdowns by targeted group and political ideology. Clearly this is driven overwhelmingly by Republicans. But the trend shows that there’s been movement in this direction pretty much across the board.

Here is the breakdown by different flavors of Christians and people without religion or at least without an explicit affiliation. 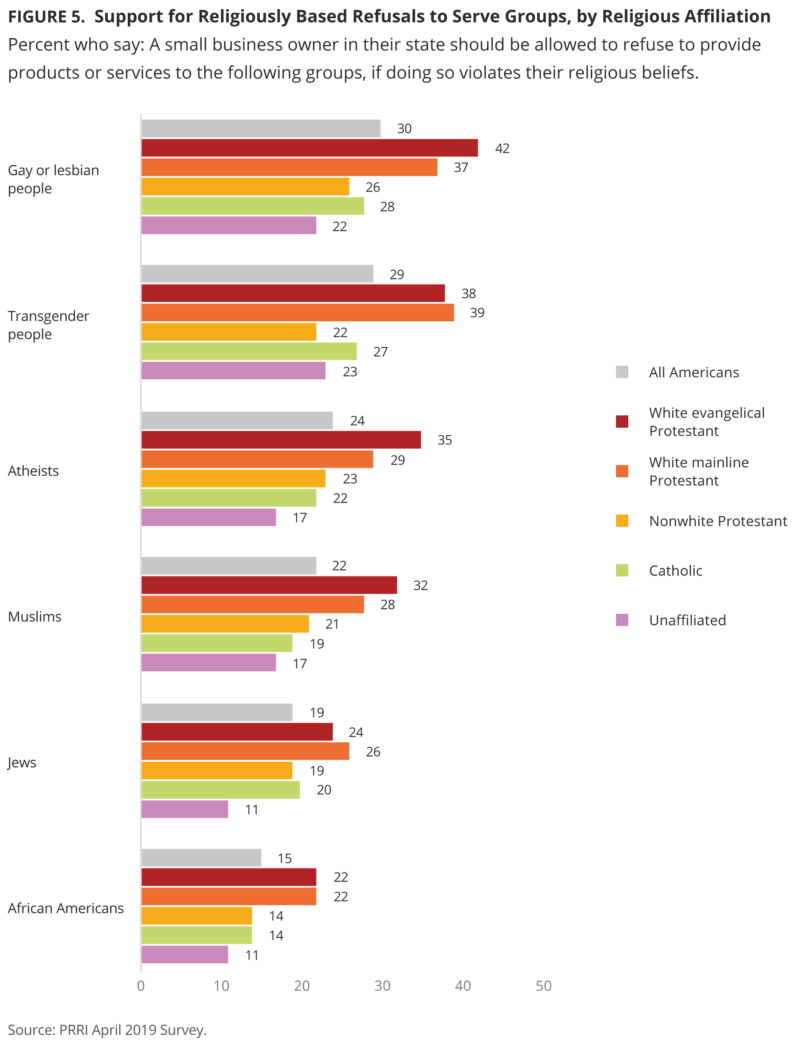 Evangelical protestants support it the most; Catholics the least. What is notable to me though is that mainline protestants aren’t that far off from evangelicals.

While Court’s are increasingly receptive to accepting de facto racial discrimination if it can be explained by some other notional rationale, I doubt many courts would be receptive to religious arguments about not selling products to African-Americans. Maybe I’m not cynical enough. But that’s my hunch. But it seems much more plausible that many people could make plausible arguments that their religious beliefs clash with Jews and Muslims.

This is obviously pretty troubling information if you’re part of one of these groups. A lot of this, most of this is what it seems like on its face: people are getting more supportive of discrimination against people not in their group. But I don’t think it’s entirely that. It seems like the proponents of this theory of ‘religious liberty’ exemption have made some real progress making the argument for the libertarian concept beyond the underlying discriminatory attitudes. Both are troubling.