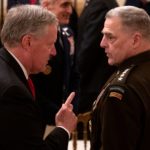 8 mins ago
Report: Pentagon Brass Privately Discussing What To Do If Trump Invokes Insurrection Act

I mentioned a few days ago that part of the backstory to the recent crisis in US-Israeli relations is tied to a briefing David Petraeus gave the Adm. Mullen and the Joint Chiefs back in January. (And let’s not get upset about the word ‘crisis’. Friendships and alliances have occasional controversies and crises. There’s nothing wrong with that. Denial feeds problems.) At that briefing, which reportedly took the Chiefs and the administration by some surprise, Petraeus made a straightforward case that the lack of progress in settling the Israel-Palestine dispute was damaging American interests in the Middle East and the lands of Islam more generally.

Now we have him saying it in his own words, in prepared remarks before the Senate Armed Services Committee.Lists under root causes of “drivers of instability, inter-state tensions, and conflict … [and potential] root causes of instability or as obstacles to security” Petraeus notes the following …

Insufficient progress toward a comprehensive Middle East peace. The enduring hostilities between Israel and some of its neighbors present distinct challenges to our ability to advance our interests in the AOR [CentCom Area of Responsibility]. Israeli-Palestinian tensions often flare into violence and large-scale armed confrontations. The conflict foments anti-American sentiment, due to a perception of U.S. favoritism for Israel. Arab anger over the Palestinian question limits the strength and depth of U.S. partnerships with governments and peoples in the AOR and weakens the legitimacy of moderate regimes in the Arab world. Meanwhile, al-Qaeda and other militant groups exploit that anger to mobilize support. The conflict also gives Iran influence in the Arab world through its clients, Lebanese Hizballah and Hamas.

In a sense, all of this is no more than commonsense, a given in many conversations about the US position in the world, especially in the arc of Muslim majority nations from the eastern Mediterranean to Indonesia. The continuation of the Israeli-Palestinian conflict directly harms the vital interests of the United States. But if this is the consensus view at the highest levels of the US military, that’s a very different world we’re living in than the one we’ve been in heretofore.

What remains to be seen is whether this is a statement not to be acted upon or a strategic analysis that will inform Pentagon policy.