8 hours ago ago
The Sausage Making: Biden Doesn’t Mince His Words

My Annotated Notes on the Comey Statement

Given the significance of the early release of James Comey’s testimony, I took a moment to annotate the document as just released this afternoon. Most of my underlines and comments will be things that others will also have keyed in on. Some are just obvious. Still, given how packed with significance and factual assertions these seven pages are, I thought this would be a helpful exercise and that readers might be interested.

Before the annotated document, let me briefly share with you the points that jumped out at me as new or significant.

1. By Comey’s own account, Trump had a reasonable basis to say that he had three times told Trump that he was not personally under investigation. This seems highly notable since that seemed like such a crazy comment from Trump in his firing letter.

2. If you look at what Comey says very narrowly, he seems to make these assurances about a counter-intelligence investigation and not a potential criminal investigation. I suspect this is an over-reading of the document. But I’ll simply note that it’s a plausible read.

3. Trump’s invitation for Comey to come to dinner at the White House came the day of the dinner was the same day Sally Yates made her second visit in two days to the White House giving White House Counsel Donald McGahn a “heads up” about Mike Flynn. Published reports say that McGahn briefed Trump about these visits and their contents immediately. It seems quite likely the Yates “heads up” was the trigger for the invitation.

4. Trump was especially focused on the sex in Moscow allegations contained in the dossier.

5. In the private encounter Trump and Comey had on February 14th, the day after Mike Flynn was fired, Comey said he understood the request to drop the probe to be specifically about the investigation of whether Flynn lied about his meetings with Ambassador Kislyak not the broader Russia investigation. It was only later that he made requests which might be interpreted as asking Comey to end the whole investigation. Comey’s statements and actions after that meeting strongly suggest that he and his advisers viewed Trump’s request as a potential instance of criminal obstruction.

6. Repeatedly in the second half of the document, Trump keeps hitting up Comey about how the Russia probe is making it hard to make deals for America. But his specific asks are not to end the probe – though they could quite plausibly be read that way. They are specifically to publicly exonerate him. He even appears to have told Comey at one point that if there were some bit players who did stuff with Russia basically, whatever, that’s their problem.

7. In various encounters, Comey is rather candid that he was perhaps slightly less forceful or clear in pushing back against President Trump’s requests. In one case he seemed to sense that his comment might have been construed as my cooperative than he’d meant it and in another case simply didn’t respond to a question rather than saying he couldn’t comply. 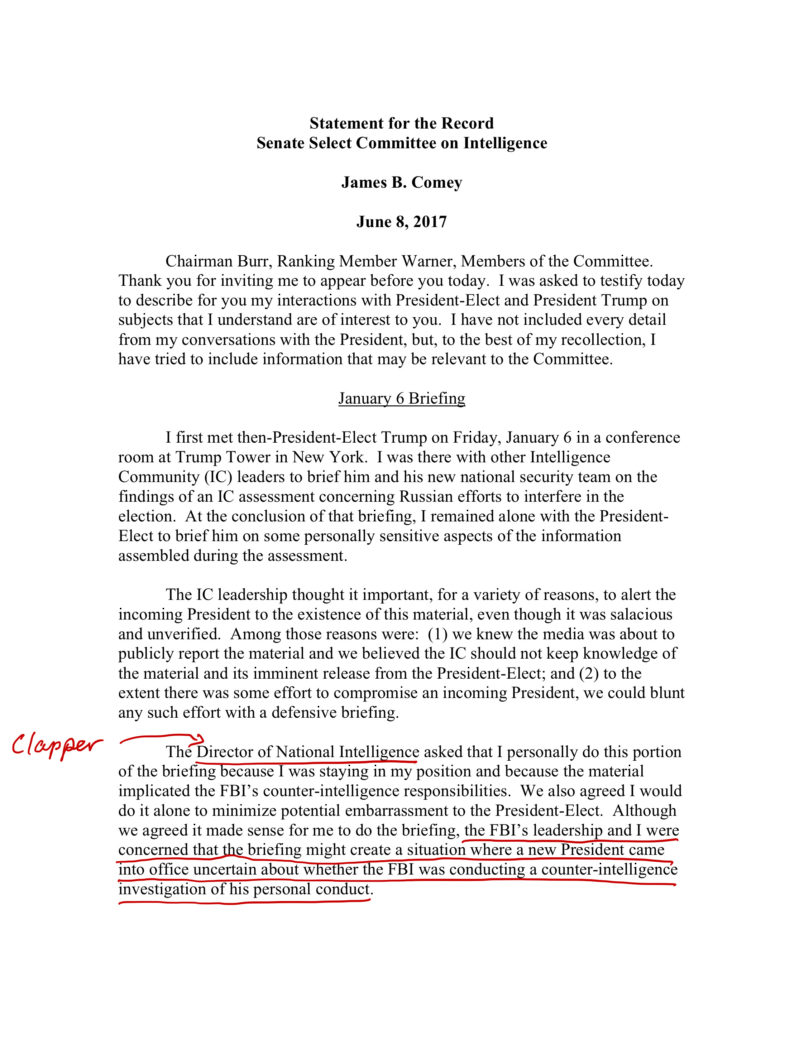 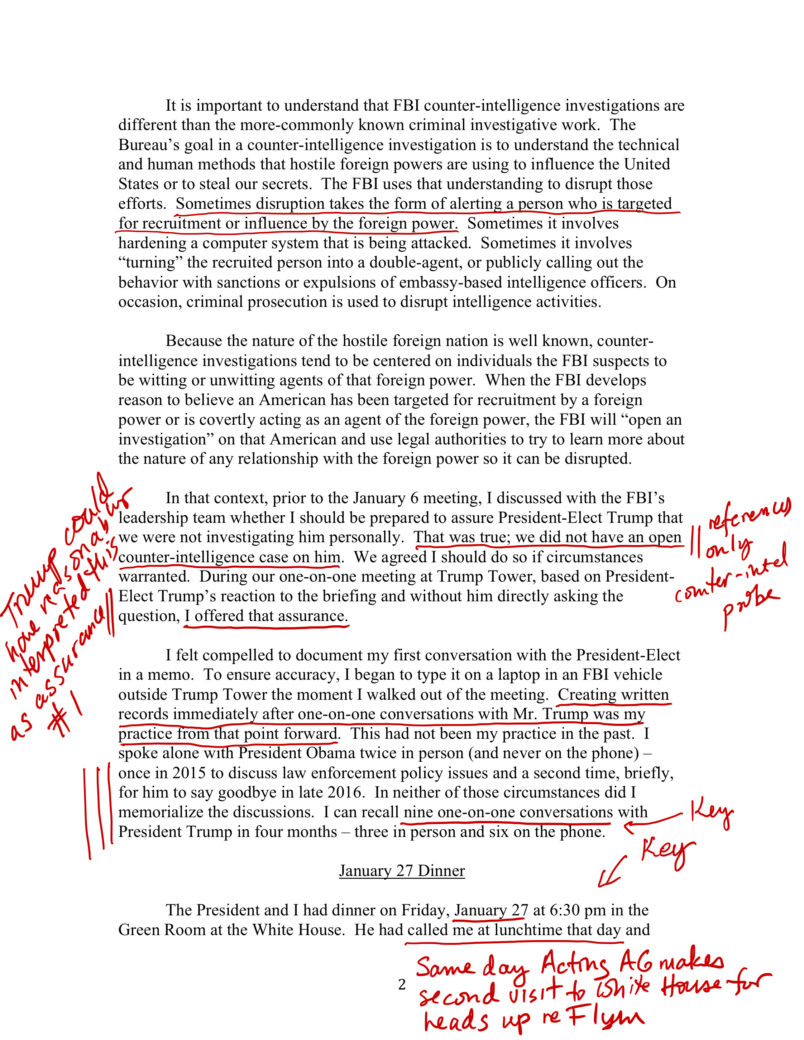 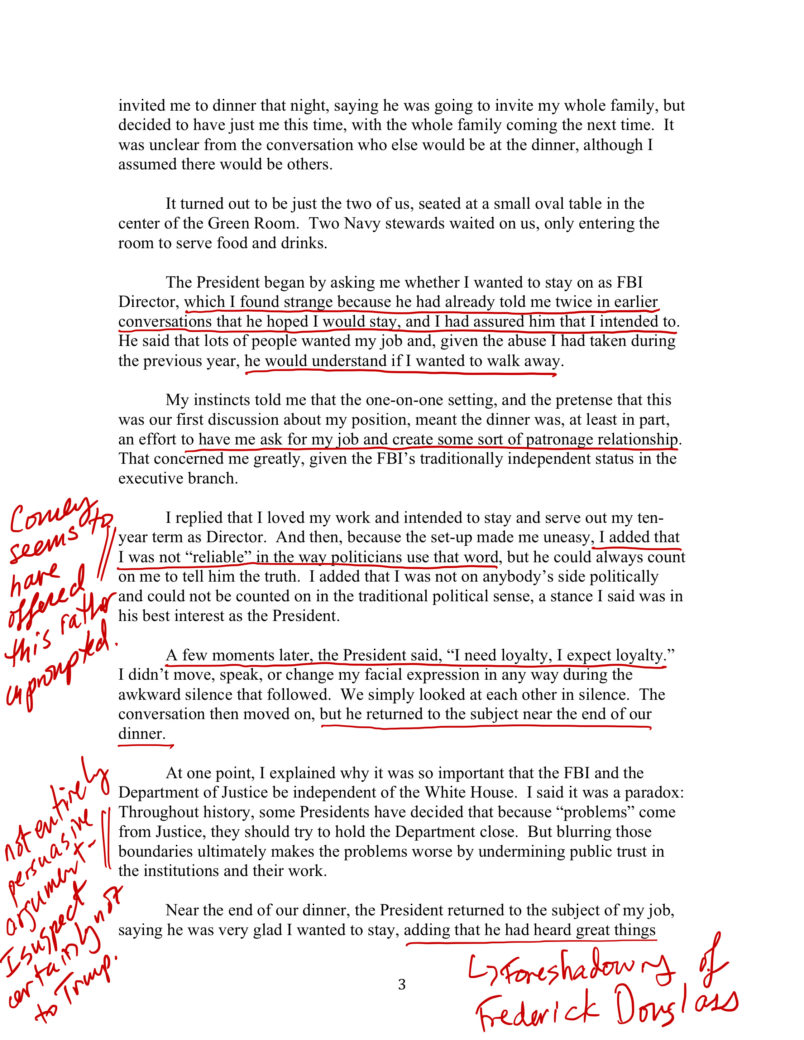 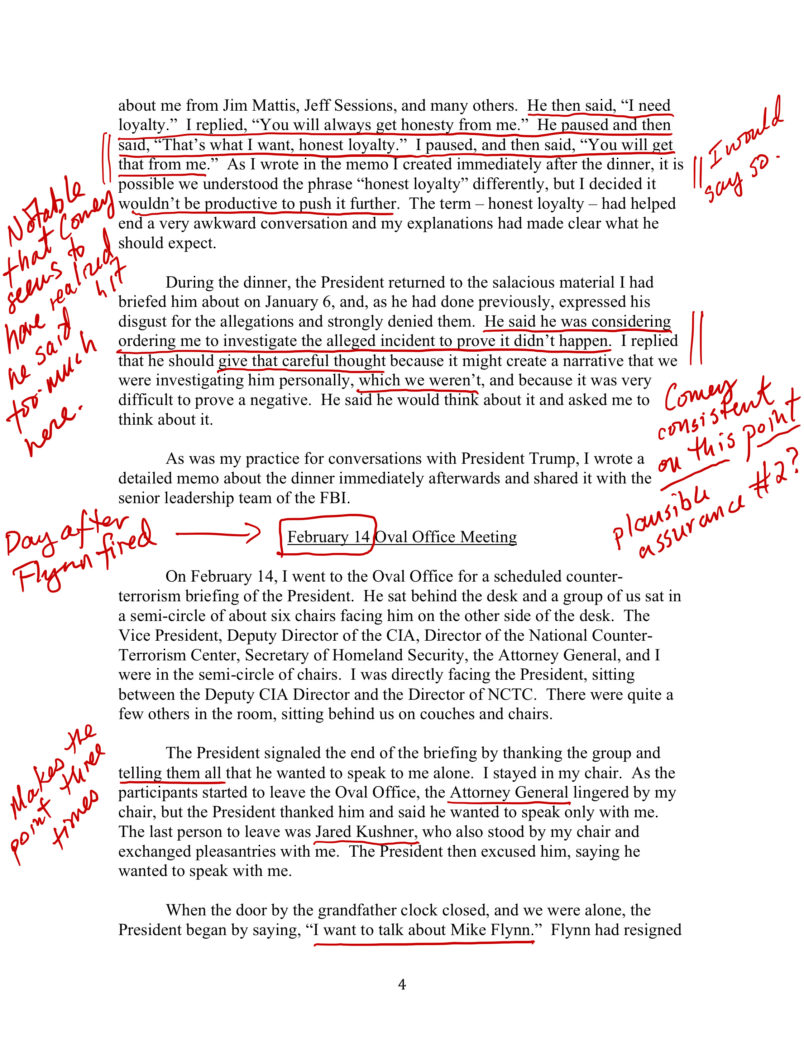 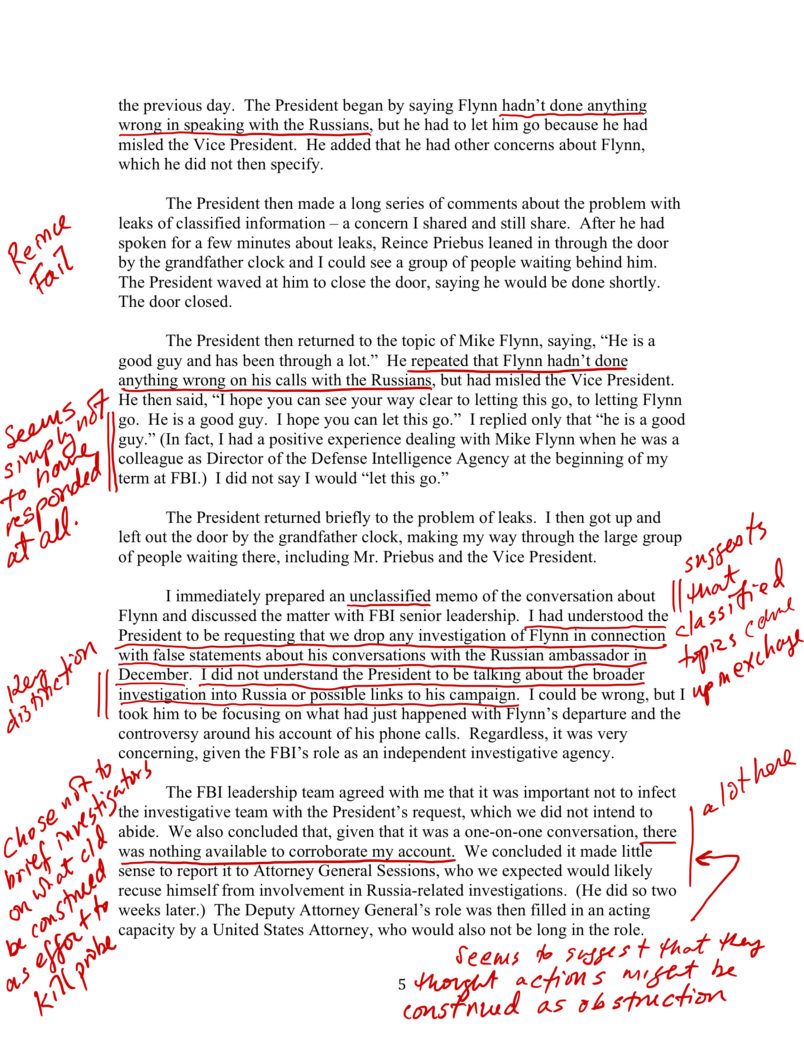 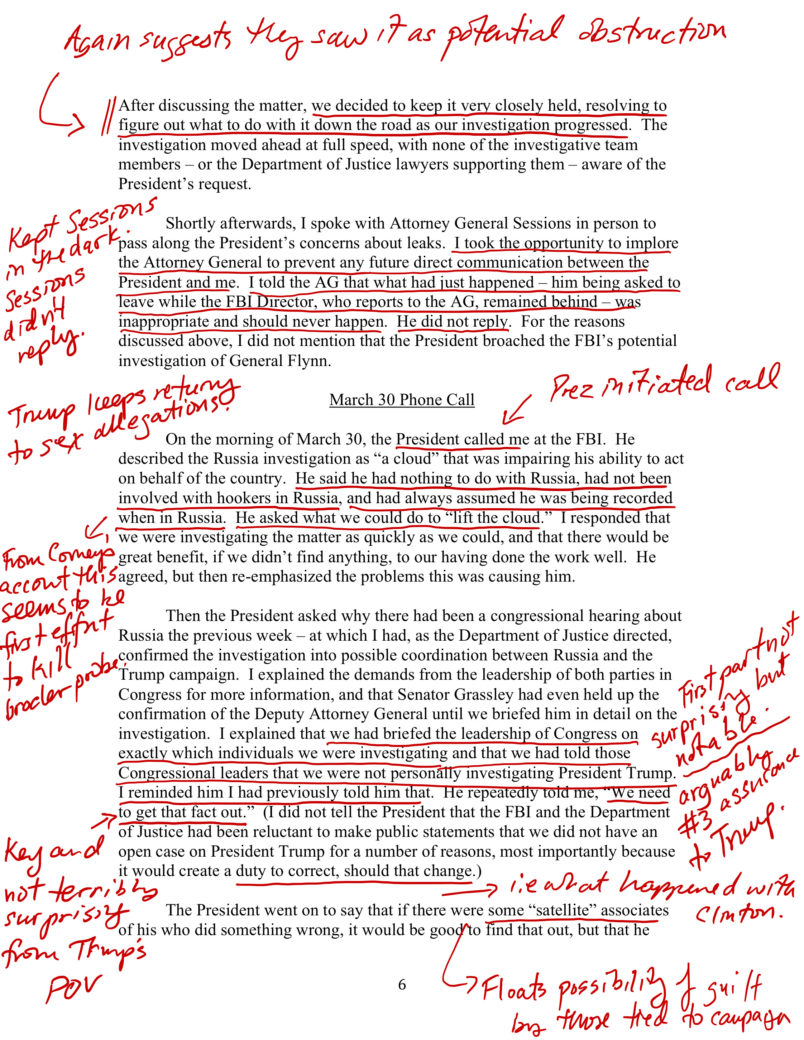 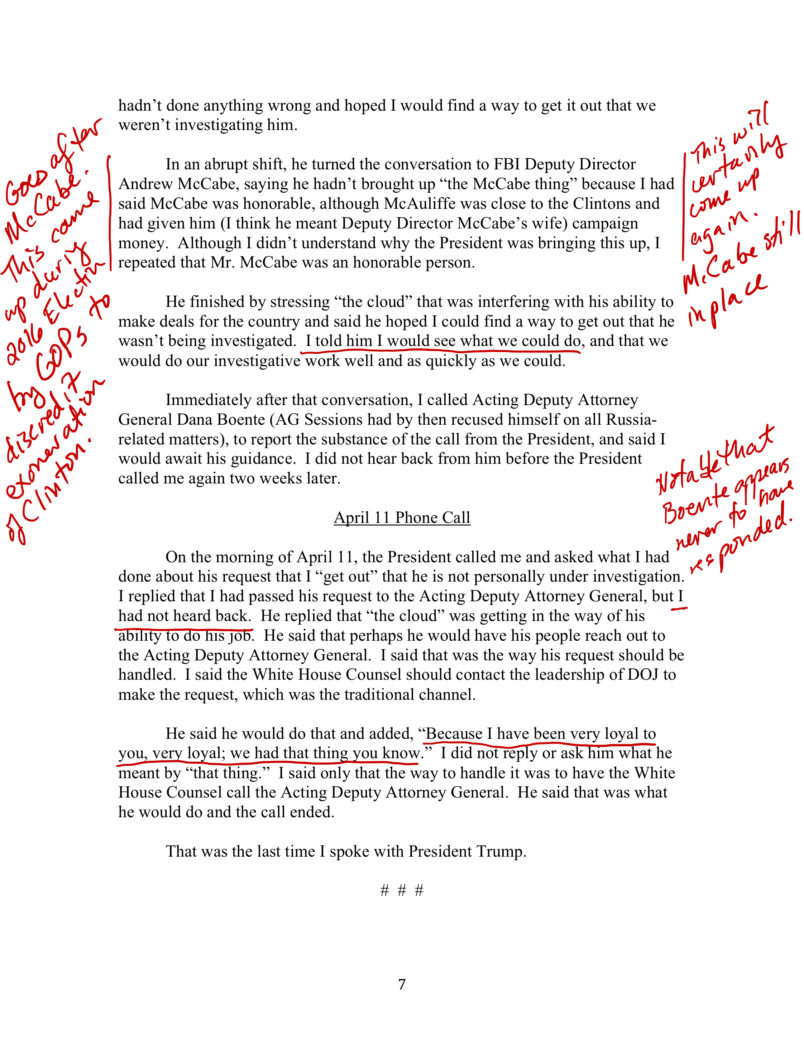