Last night on Twitter, along with urging various nations in Northeast Asia to go to war with North Korea, President Trump retweeted a gushing tweet from someone named Jacob Wohl, a name I hadn’t heard before. A quick look at his twitter profile shows Wohl presents himself as a financial management wunderkind and epic Trump supporter. He’s already a mini-star in conservative media and no doubt about to grow in such stardom with a retweet from the President. (It’s worth wondering, how did Trump find Wohl.) He also appears to be a veritable mini-Trump, racking up a reputation for defrauded investors, various boffo shenanigans and a batch of regulators on his trail.

A look at Wohl’s business website, “Montgomery Assets” shows him in a meet-and-greet photo doing the thumbs up gesture with President Trump. Wohl plays up his purported relationship to Trump as well as being devotee of Trump’s methods of achieving success.

According to the Montgomery Assets site, Wohl launched his first ‘hedge fund’ at age 16 while still in high school and “received attention from around the world for being the youngest hedge fund manager of all time.” Another part of the site explains that the Montgomery Assets team “use[s] an alternative thought process for looking at and analyzing the world in order to create better projections about future trends.” Wohl is the CEO of Montgomery Assets, which the site list as having offices in Beverly Hills and Chengdu China.

So what is Montgomery Assets?

Regulators all over the country seem to be trying to find out. On August 19th of last year, the National Futures Association, an non-governmental industry watchdog and self-regulation body created under the auspices of the Commodity Futures Trading Commission in 1982, filed a complaint for numerous infractions including ripping off a guy named David Diedrich. Diedrich invested $75,000 with Wohl, making a nice return of 8.3% on his investment over about 6 months. But when Diedrich tried to withdraw his money, he had to ask over and over again to get it. And when Wohl finally sent him a check to close out his account, it was for $44,000 rather than $89,500 his account listed.

Wohl said the difference was due to “loses.”

The NFA proceeded to investigate, an effort that included an effort to visit the place of business, which seems to have been the Wohl family’s home. This led to a bizarre cat and mouse game with the Wohls objecting to the NFA personnel’s clothing, threatening the examiner to “stay away or else” and finally file a complaint with the LAPD.

On March 2nd, 2017, the NFA banned Jacob Wohl for life from the NFA or operating as a principal for any NFA member.

Wohl says he’s been called the Wohl of Wall Street but claims the comparison is unfair. WohlofWallStreet is also the url of his personal website. 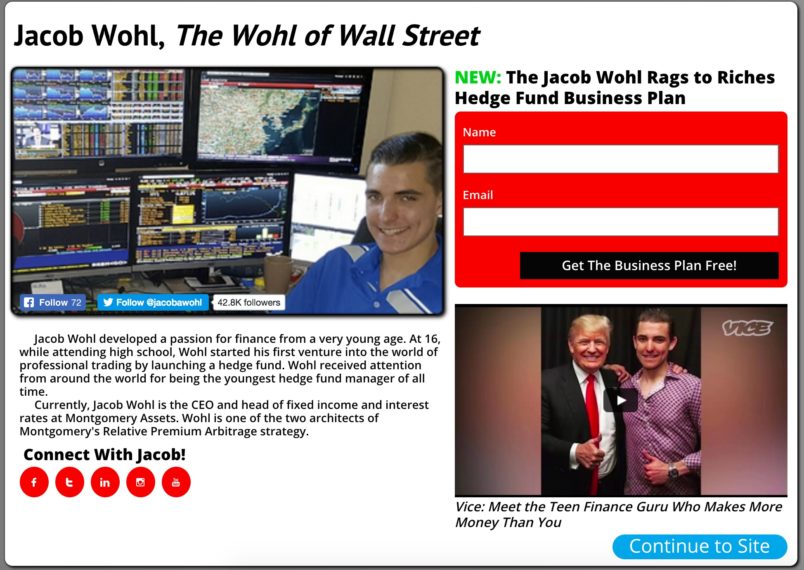 From looking at Wohl’s site and various interviews, it’s really not clear to me that Wohl runs a ‘hedge fund’ in any sense that most financial professionals understand the term. Perhaps there’s a fund he’s not discussing. But it seems more like taking money on account, investing it on behalf of clients and, as we’ll see, often refusing to give it back.

It’s not just the NFA. The State of Arizona isn’t crazy about Wohl either. Back in September 2-16 the Arizona state Corporation Commission issued a cease and desist order against Wohl, an associate and all his investment businesses barring them from activities in the state. The order lists a series of instances of alleged fraud, false or deceptive claims and bad acts. Reading through the 22 page order suggests Wohl’s racket is appear on Fox and other media outlets to drum up business and then using various deceptive claims to take people’s money. A former employee has also claimed Wohl hired “instagram models” to encourage potential investors. (No. Idea.)

Oddly, one of the media appearances hyped on his site wohlofwallstreet is actually a comically devastating send up of Wohl as a classic flimflam artist.

I guess he wants people to see both sides of the story.