8 hours ago
Coronavirus Death Toll Surpasses 100,000 In The US

Is Germany a Model for COVID-19 Response?

Most of you reading this probably rightly think that Donald Trump and his top advisors catastrophically mismanaged the country’s COVID-19 response. But we also know that the disease has had a shattering impact on countries around the world. So how do we measure the real world impact of the failure to do early testing or start planning to deploy medical resources in January or February? One potential comparison is Germany – another wealthy, industrialized democracy with a world-class capacity in the sciences. Germany got moving early on testing and they have a lot of ICU beds. They also moved rapidly toward aggressive social distancing, at least compared to countries like Italy. You can read more details about it here.

A thing to keep in mind is that the focus on “death rates” from COVID-19 is likely significantly misplaced. For instance, roughly 12% of people with confirmed infections in Italy have died. In Germany it’s 1.1%. But that is almost certainly due in large part to different levels of testing. Overwhelmed hospitals in countries like Italy and Spain are also almost certainly leading more people to die than would have been the case if every patient got focused care. So the “real” death rate is likely higher in Italy than Germany. But it’s impossible at this point to know the exact mix of each factor. (For a point of comparison. The comparable rate in then US is 2.2% as of this moment.)

Early in the crisis there was a lot of discussion that the US has fewer hospital beds relative to population compared to many other countries. But when it comes to ICU beds the US is actually pretty high on the list. The article I just linked to reports that Germany has 33.9 ICU beds per 100,000 residents whereas Italy has 8.6 per 100,000. This measure is complicated by there being no universal definition of an ICU bed and uncertainty about reporting. But the near universal baseline is mechanical ventilation, which is the most relevant metric for the COVID-19 crisis. This 2013 NIH study suggests the US has dramatically more capacity (20-31.7 per 100,000) than many other countries and is in the Germany range. This is likely one case where the US system’s focus on high cost, high tech interventions at the expense of access and effective public health strategies (which are most effective for life expectancy) is paying off.

To make sense of how different societies are coping with the COVID-19 Crisis perhaps the best metric is fatalities per million people. As we’ve noted in Italy and likely for most countries, fatalities can’t be viewed as an absolute metric since substantial numbers, perhaps even most fatalities are going unreported – or rather they’re not being ascribed to COVID-19.

Still the numbers and comparison are stark. 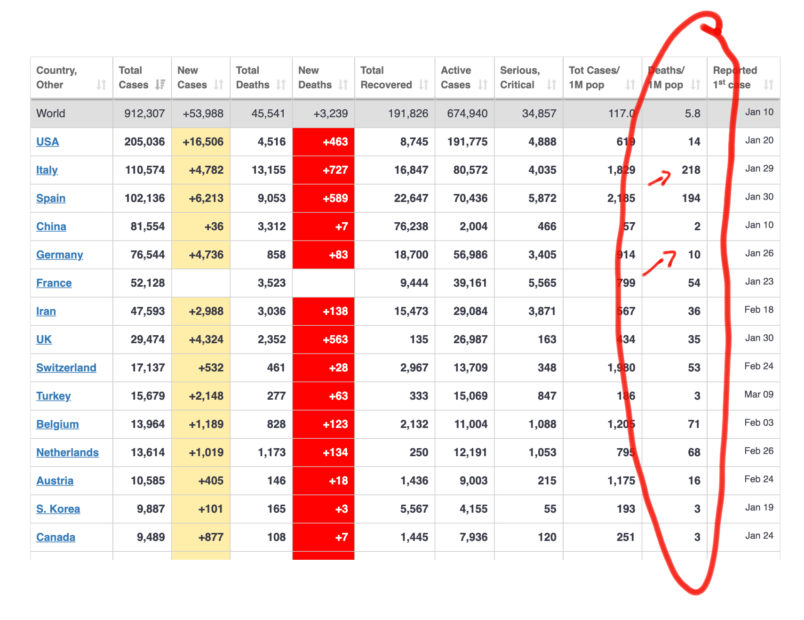