Initial Details and Thoughts on Comey

I can only remember a few times in twenty years in this business that I heard genuinely stunning news. Obviously 9/11 was stunning; natural disasters are stunning. But I mean political developments which are totally unexpected and substantially shocking. This is shocking.

I want to give some basic background. Let me first discuss the letters released by the White House, which explain the reasoning of Attorney General Jeff Sessions and the Deputy Attorney General who made the recommendation. We are only just reviewing the letters. But they appear to hang Comey’s firing on his handling of the Clinton probe, arguing that his July press conference was inappropriate, violated DOJ guidelines, etc. They also reference his October 28th email.

In other words, they are saying that they are firing Comey, in essence, for unfairness to Hillary Clinton.

To be fair, on the surface that are not talking about fairness but Comey’s violations of precedent and guidelines in choosing to speak out about Clinton. I believe this is true. Comey’s actions in both instances were entirely inappropriate and wrong. But, in context, this is highly disturbing since this is clearly not the reason why Comey was fired.

Notably in Trump’s letter to Comey he “thanks” Comey for purportedly three times telling Trump that he was not personally under investigation in the Trump/Russia probe. 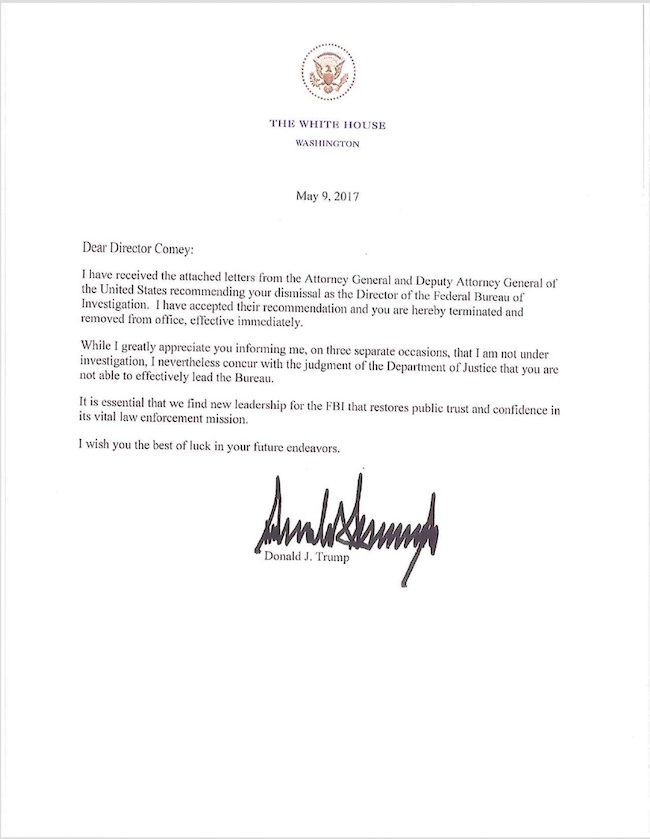 This is a very, very dark development.