7 mins ago ago
Who’s Mainstreaming The ‘Great Replacement’ Theory?

47 mins ago ago
Far-Right On The Ballot: What To Look Out For In Tomorrow’s GOP Primaries

Did Trump Ever Have a Chance?

Six months ago I joked that the President’s defenders would eventually come around to arguing that we should pity the President rather than hold him in contempt because he’d been raised in a culture of criminality and had no experience following the law.

Next month: The Trump family deserves our pity, not contempt. They are a family of mental deficients with no experience following the law.

The weird thing is that I’m now coming around to that defense. Now, needless to say, it’s no defense. But allow me to explain. Because I do think it is illuminating, inasmuch as something as dark as President Trump’s predatory, criminal instincts can be brought to the light. Three times in recent days we’ve seen references to the President’s belief that Attorneys General for Presidents Kennedy and Obama protected them from the law and that Trump had great respect for this. He has displayed a running rage and contempt for Attorney General Jeff Sessions, once his most important political ally, because he failed in this most basic of duties: protecting the President from the law.

One oddity about this repeatedly stated belief is this: why Obama and Kennedy? Obama makes sense. Trump sees everything through the prism of Obama. But why Kennedy? That was decades ago. There have been many presidents since. Three of them, besides Kennedy and Obama, were Democrats. One of those, Richard Nixon, had an Attorney General who literally went to prison for crimes he committed on the President’s behalf.

Why these two Presidents are the point of reference is a mystery I hope to see solved. (Perhaps it is something Roy Cohn, a nemesis of Robert F. Kennedy, told Trump back in the day or perhaps it has something to do with how both men were and are idealized.) But for now, the relevant point is that President Trump actually seems to believe this. Trump is such an instrumentalist in regards to truth-telling that it may be impossible to fully separate his belief from bad faith. But to the extent Trump believes anything I think he believes this. He not only wants his Attorney General to protect him from the law. He thinks that’s how it’s supposed to be and in fact has been.

Why should Donald Trump be the only President to get treated like a chump?

We see these attitudes as the mindset of a would-be authoritarian. And they are. But they are also the attitudes of a criminal. By this I mean not simply someone who has broken the law. I mean someone who has no inherent respect for the law or great fear of its enforcement and breaks the law more or less casually when it is convenient and relatively safe to do so. Typically, such people see the trappings of the law as little more than a mask for the exercise of power. This is clearly Trump’s view of the world. Just as clearly he saw becoming President as essentially becoming the law. It is the ultimate power and what comes with that is legal invulnerability for him and his family. He earned it.

If you’ll allow me a whimsical comparison, this reminds me of a classic Star Trek episode from 1968: A Piece of the Action. If you’re unfamiliar with the plot, the Enterprise travels to a world, Sigma Iotia II, that has been culturally contaminated by earlier contact with humans. A hundred years earlier a starship had visited the planet with its highly imitative culture on the verge of industrialization and inadvertently left behind a book on mob rule in Chicago in the 1920s. Believing the visitors were superior beings or even gods, the Iotians built a society based entirely around what is described in this book. It is their ideal society. They refer to it as “the Book”, in effect their bible. In other words, the Enterprise finds a world in which everyone is a criminal – but not criminals in the sense of deviants from a social norm of lawful behavior. They inhabit a world in which criminality is the what is aspired to, valorized and proper. 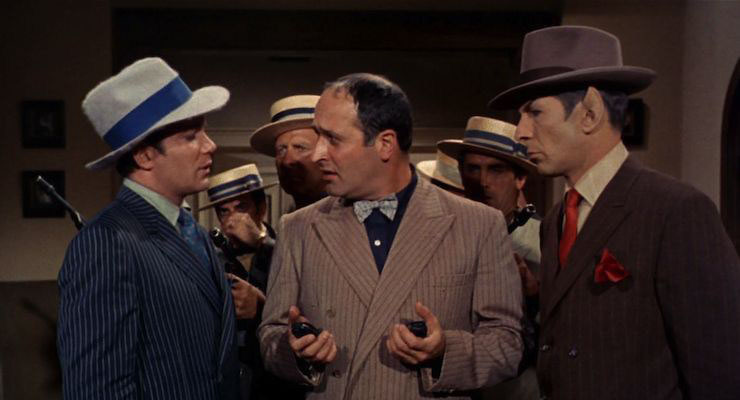 Everyone on this planet is crook and a thief. But you can hardly blame them since they were born to be crooks in a society that made crime and the acquisition of power by violence the highest good. The episode plays the concept largely for laughs. But the idea is most readily comparable to mob families we know from dramas like The Sopranos and The Godfather. Tony Soprano and Vito Corleone aren’t against the law. It’s just something like the weather that you deal with and work around and maybe even use sometimes but all and only in the service of personal and family power and wealth. The key theme of all mob drama – and presumably to some degree the reality of mob culture – is that the law is for chumps, a crutch for those who aren’t man enough, powerful enough to get what they want without it. This sounds very much like the mindset of Donald Trump and his family. Who would be a fool enough to become President of the United States and not use the power for legal invulnerability?

Throughout the last year, and particularly in the reporting we’re seeing in recent days, a persistent theme is that Donald Trump not only sometimes breaks the law but has no familiarity or experience following it. The idea of limits is simply alien to him. We see this repeated pattern of aides scurrying around, plotting amongst themselves, all trying to prevent him from doing things that are not only clearly illegal or even unconstitutional but wildly self-destructive. The months’ long effort by even the most transgressive and aggressive aides – folks like Steve Bannon, for example – to stop Trump from firing James Comey is the most vivid and high-octane example. Very notably, the biggest advocates for firing Comey were not Trump’s wildest advisors but members of his family – Jared Kushner and, now it seems, Ivanka Trump too. It’s the immediate family members and the lickspittles and retainers he brought with him from his private sector fiefdom, The Trump Organization – Dan Scavino, Hope Hicks, et al. It’s a Family in every sense. They have no experience following the law, all reared in a culture of inter-generational criminality.

Obviously, I’m playing this for laughs at some level or having some fun with it. And in any case, even if we use Trump’s family background and acculturation to understand his criminal mindsight, society needs to defend itself from habitual criminals and those who view themselves as above the law. But there is a reality here and it’s a reality I think is key to understanding Trump and the situation the country is currently in. As his top advisors and aides seem to realize as clearly as anyone, Trump is wholly unable to follow the law. He needs to be monitored closely to prevent him from breaking the law. And don’t get me wrong. Many of these folks are not at all the best people. They’ll break the law. But they’re also acculturated into law-abiding society. So they have a sense of how to do it sparingly or at least discreetly so as to at least avoid getting caught. Trump seems to have no such experience. That all worked out fairly well when he operated his fiefdom out of New York, using hyper-litigiousness (paradoxically) to preserve his invulnerability, working the tabloid media culture for the same purpose and cultivating an enabling and protecting relationship with the local offices of the FBI (a still mainly untold story).

Quite simply he doesn’t know how to follow the law. The same seems to apply to his family. The fact that the constitution makes him the person ultimately responsible for enforcing the laws of the United States is a mismatch that will and indeed eventually must blow apart. It’s only a matter of time. Indeed, in some sense, it’s already happened.