You can see that last night we had what I think has to be close to an unprecedented development in a US political race. The frontrunner candidate body-slammed a reporter for pressing for an answer about the new CBO score of Trumpcare. (It’s a secondary element of this story how charged and threatening that CBO is.) I’ve seen scuffles with reporters, shoves. Jostling in a press scrum is not uncommon and occasionally someone will get knocked down. But I genuinely can’t remember anything comparable to this.

Gianforte grabbed Jacobs by the neck with both hands and slammed him into the ground behind him. Faith, Keith and I watched in disbelief as Gianforte then began punching the man, as he moved on top [of] the reporter and began yelling something to the effect of “I’m sick and tired of this!”

Jacobs appears to have sustained relatively minor but real injuries, which required emergency room medical attention. After first leaving the scene Gianforte was later charged with assault. From what I can tell, most or all of the state’s major papers have now rescinded their endorsements of Gianforte. 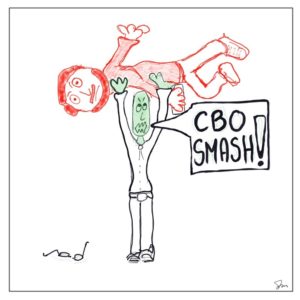 Today is election day. This was already a much closer than expected race, with Democrat Quist running an unconventional campaign and buoyed by widespread anti-Trump sentiment and millions of dollars from Democrats and anti-Trump voters around the country. Gianforte was probably still the favorite. But only just, and in a race where uncertainty is a bigger factor than either candidates’ measuable support.

One would think this bizarre incident would be the end for Gianforte. It may well be. But there’s one factor to keep in mind. This is a state with lots of early voting. In-state analysts estimate that at least half the votes have already been cast. So the impact of this event may be less than we’d imagine for that reason alone. But people were expecting a close finish, albeit with perhaps some advantage for Gianforte. So even if we assume that as little as a third of the vote remains, the impact of this unreal event could still prove decisive.

Of course, we shouldn’t forget that it was quite possible that Quist, the Democratic, was heading for victory in any case.