17 hours ago
Susan Collins Is Shocked! Shocked! Claims Gorsuch And Kavanaugh Betrayed Her

A Bit More About Our New Best Friend Rod Blum

Before I say more about Rep. Rod Blum and his performance yesterday when he stormed out of an interview in Dubuque after what were really the mildest questions, I wanted to give you an example of how much we rely on our readers and how simply awesome they are. 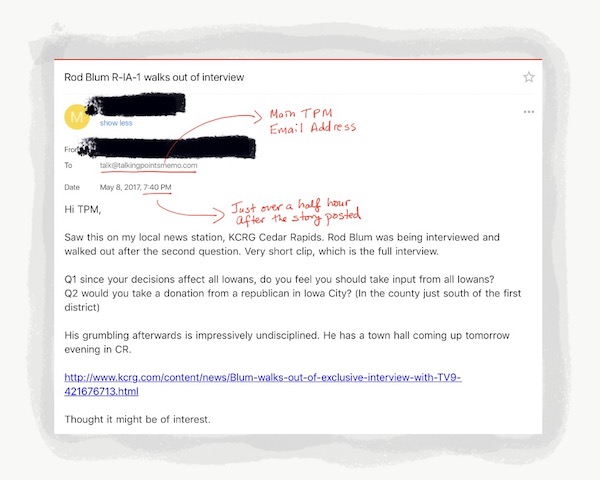 Pretty straightforward and to the point. But it helped me find out about this little nugget of a story before most of the national press. Note too, it’s sent into the email we’ve used for almost the entire 17 years of the site’s history: talk (at) talkingpointsmemo dot com. That’s the one right under the logo at the upper left.

See something, say something, as they say. Or rather, dash off an email to TPM. We can’t always respond but we read these very closely. What we call “talk” emails is an integral part of the site’s editorial process.

Now, if you haven’t seen this story yet, here’s a quick run-down I posted last night. Blum’s staff arranged this interview with local TV news reporter Josh Sheinblum. Blum is visiting a community center in Dubuque with a group of children standing around him as props (of course, something most politicians do). He gets two not very hard or even aggressive questions and he gets up and storms off. All politicians use kids as props at some point; not all of them traumatize them with an on-air temper tantrum.

Blum also got an earful from constituents at a town hall yesterday in Dubuque. (I’m not sure which happened first. Maybe the town hall was first and he was upset and took it out on the interviewer?)

Now, you may be thinking, well, Blum is another Republican who voted for Trumpcare. But surely he’s in a safe district. So he’s got an office for life, or at least until 2022. So it doesn’t matter what he does.

Blum won 51-49 over his Democratic opponent in 2014, his first race. He won reelection last November with 54% of the vote. The Cook Political Report actually rates it a D+1 district. In other words, this is a swing district which Blum is really only holding on the basis of the 2014 blow up and incumbency.

Actually, not sad. Who’s going to run against him?