Republicans Learn The Hard Way: You Break Obamacare, You Own It

As his administration has steadily chipped away at the Affordable Care Act, President Donald Trump has repeatedly insisted that the public will blame the Democratic Party for any health care fallout.

Now, as Republicans in Congress inch towards striking what could be the biggest blow yet to Obamacare—sticking a provision repealing the individual mandate into their tax bill—even some on the right are starting to sweat that the GOP will fully own the issue going forward.

“You can make an argument that Obamacare is falling of its own weight, until we repeal the individual mandate,” a grave-faced Sen. Lindsey Graham (R-SC) told reporters in the halls of the Capitol on Thursday. “I hope every Republican knows that when you pass a repeal of the individual mandate, it’s no longer their problem. It becomes our problem.”

A new poll from the Kaiser Family Foundation confirms these fears. More than 60 percent of respondents, including a majority of Republicans, in the think tank’s November tracking poll said that Trump and the GOP are “responsible for any problems” with the Affordable Care Act going forward. 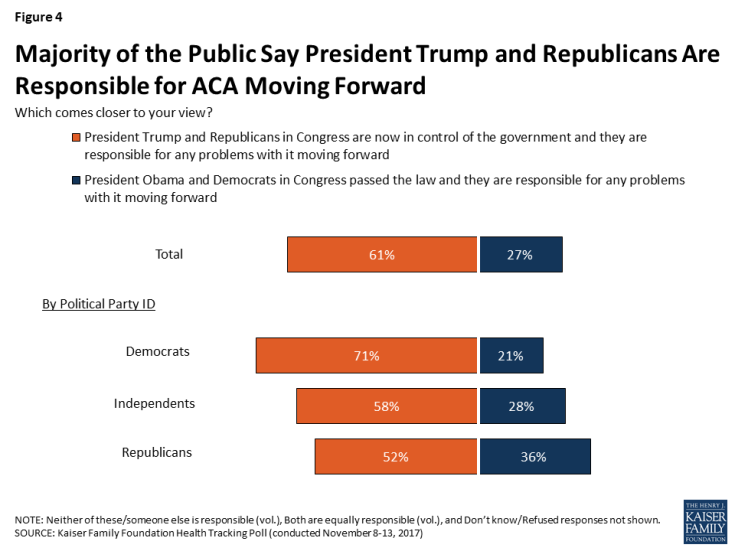 That’s about the same overall percentage of the public that Kaiser found blamed Trump and the GOP for the ACA’s struggles back in August, but in just those few months, the number of Republicans who blame Republicans has jumped from 36 percent to 52 percent.

That notable shift happened as the Trump administration took a number of blatant actions to undermine the Affordable Care Act—gutting outreach by 90 percent and in-person signup assistance by more than half, abruptly canceling billions in cost-sharing reduction payments to insurers, severing partnerships with dozens of community groups that promoted enrollment, and using the presidential megaphone and agency resources to attack the ACA and predict its imminent demise.

Despite this onslaught, Obamacare’s markets have not collapsed, as many predicted. In fact, enrollment has been fairly robust, there are zero bare counties, and millions of Americans have access to better plans for less than they paid in years past.

Yet the sabotage has taken its toll.

The number of uninsured Americans ticked up this year for the first time since Obamacare was enacted—with an additional 3.5 million people uninsured since Trump took office. Many insurance companies quit the individual market in a number of states, specifically citing Trump administration-fueled uncertainty, leaving Americans in hundreds of counties with only one insurer to choose from.

Premiums have also skyrocketed, and while the majority of people are protected from these hikes by increased government subsidies, several million un-subsidized Americans have been slammed, forced to pay several hundred dollars more per month. Trump’s cancelation of the CSR payments also led to millions of subsidized people receiving misleading renewal notices that state officials fear will drive people to drop out of the market entirely. And while open enrollment has had a strong start, with more than 1.5 million people enrolling in the first two weeks, the enrollment period was slashed in half and the signups are not on track to match, much less beat, last year’s numbers.

In this shaky environment, repealing the individual mandate could be the final blow that hikes premiums, drives more insurers out of the market, and sends Obamacare into the “death spiral” Republicans have long predicted.

Still, Senate Republicans eager to fulfill eight years of promises to repeal the Affordable Care Act and frustrated by nine months of failure to do so say they’re eager to kill the mandate as part of their tax bill.

“It’s a good idea,” Sen. Shelley Moore Capito (R-WV) insisted to TPM. “I think it’s an onerous requirement and I’m all for its repeal.”

Sen. Jim Inhofe (R-OK), asked by TPM if gutting the mandate would be a “death blow” to Obamacare, grinned and said, “I hope so.”

But while the individual mandate is one of the least popular provisions in Obamacare, disliked by people across the political spectrum for charging a penalty to those who do not have health insurance, health care experts and even some Republican lawmakers warn that gutting it will have widespread negative consequences.

“It will cause premiums in the individual markets to go up as healthier, younger people drop out,” warned Sen. Susan Collins (R-ME).

A new report from the non-partisan CBO found that repealing the individual mandate would result in 5 million fewer people in the individual market by the end of the decade and cause premiums for those who remain to jump at least 10 percent during most years in that period. Collins’ staff calculated that this increase would be so large for some middle class families that it would cancel out any of the tax breaks they would get from the rest of the GOP bill.

By changing the mandate, Graham told reporters, “we’d be changing the fundamental principle of Obamacare.” If the GOP takes no actions to prevent the subsequent premium increases, he said: “People are going to get whacked pretty hard.”

With this in mind, Graham, Collins, and a handful of other Republican lawmakers traveled to the White House on Thursday to plead with the President to support a bipartisan ACA stabilization bill that Trump and Senate Republicans abandoned earlier this year. A GOP aide told Politico that meeting’s message was a warning that “if we repeal the individual mandate, then Republicans have some responsibility to fix health care—not Obamacare.”

The message may have gotten through. Over the weekend, several Trump administration members seemed to back away from demanding the mandate’s repeal be in the tax bill.

“If it becomes an impediment to getting the best tax bill we can, then we’re OK with taking it out,” said Budget Director Mick Mulvaney.

White House legislative affairs director Marc Short added that “The White House is very comfortable with the House bill” even though it “does not have the individual mandate in it.”

As more Republicans acknowledge the toxicity of further health care meddling, Democrats, looking at the public polling numbers on health care, see Republicans’ vulnerability and are ready to strike.

This week, the pro-Obamacare group Save My Care is launching a six-figure ad buy targeting Sens. Collins, John McCain (R-AZ) and Lisa Murkowski (R-AK), pressuring them to vote against a tax bill that includes what they dub a “sneaky repeal” of Obamacare, and specifically citing the predicted increase in premiums that would result from the mandate’s removal.

“You break it, you own it,” Jesse Ferguson, a Democratic campaign strategist working with Save My Care, told TPM. “And Republicans are trying every trick in the book to break it.”

New!
Start your day with TPM.
Sign up for the Morning Memo newsletter
Alice Ollstein (@AliceOllstein)  was a reporter at Talking Points Memo, covering national politics. She graduated from Oberlin College in 2010 and has been reporting in DC ever since, covering the Supreme Court, Congress and national elections for TV, radio, print, and online outlets. Her work has aired on Free Speech Radio News, All Things Considered, Channel News Asia, and Telesur, and her writing has been published by The Atlantic, La Opinión, and The Hill Rag. She was elected in 2016 as an at-large board member of the DC Chapter of the Society of Professional Journalists. Alice grew up in Santa Monica, California and began working for local newspapers in her early teens.
Have a tip? Send it Here!
includes:
Obamacare
Latest DC
Comments
Masthead Masthead
Founder & Editor-in-Chief:
Executive Editor:
Managing Editor:
Associate Editor:
Investigations Desk:
Reporters:
Editor at Large:
General Counsel:
Publisher:
Head of Product:
Director of Technology:
Associate Publisher:
Front End Developer:
Senior Designer: