Donald Trump, Jr. is taking a lot of heat for the bombshell story about his meeting with a Kremlin-linked lawyer who promised damaging information about Hillary Clinton as part of a Russian government effort to help his father’s campaign. But another person present at that meeting was who ultimately set in motion the events that led to its public disclosure: Trump Jr.’s brother-in-law, White House adviser Jared Kushner.

The June 2016 sit-down with Russian lawyer Natalia Veselnitskaya was first brought to government officials’ attention when it was listed among the foreign contacts on Kushner’s amended application for a top-level security clearance, according to the New York Times. Kushner had initially omitted all of his meetings with foreign nationals from his SF-86, the questionnaire all applicants for national security clearances must fill out.

Once word got out within the government, the Times was informed about the development by people “familiar with” Kushner’s application. The newspaper published its first report about the Veselnitskaya meeting over the weekend, and then followed up with an increasingly damaging series of articles about it. The escalating stories prompted Trump Jr. to publish the entire email exchange leading up to the meeting on Twitter on Tuesday, laying out the details of what inspired the rendezvous. 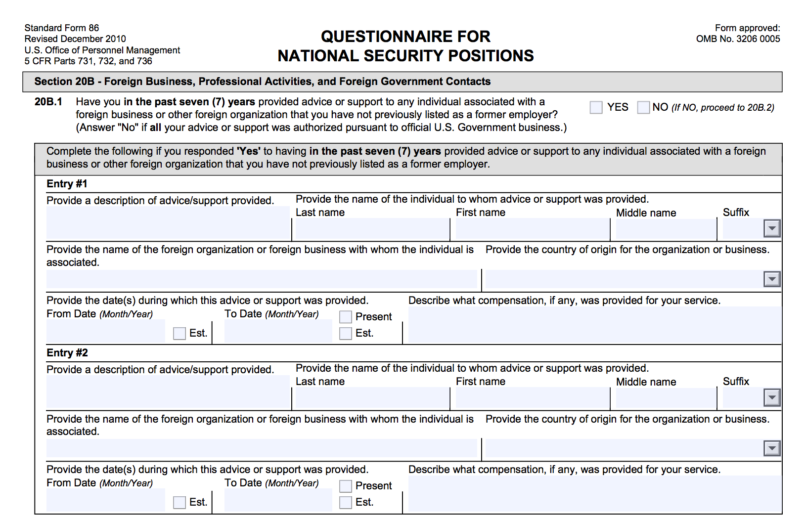 Above, the section on the SF-86 form requesting disclosures of foreign contacts.

The emails showed Trump Jr. knowingly agreed to the meeting with an individual that a publicist and family acquaintance, Rob Goldstone, described to him as a “Russian government attorney” who had information that would “incriminate” Clinton. The information on offer was “part of Russia and its government’s support for Mr. Trump,” Goldstone wrote. Kushner and then-campaign chairman Paul Manafort were forwarded the entire email chain detailing the purpose of the meeting, according to the Times.

It’s unclear exactly when Kushner submitted supplemental information, or whether he did so all at once. As of early April, when some of Kushner’s other previously undisclosed meetings with Russian nationals first surfaced, his team said he was still working on gathering all the necessary information. Both the CNN and Times reported that the disclosure of the meeting with Veselnitskaya occurred “recently,” immediately after Kushner’s legal team discovered the email chain while preparing for testimony before Congress.

Manafort also had mentioned the meeting to congressional investigators during a recent closed-door interview, according to the Times. Both the meeting and the emails arranging it are now part of the investigation the special counsel’s office is conducting into Russia’s interference in the 2016 election, CNN reported.

Kushner’s White House spokesperson did not respond Wednesday to TPM’s request for comment. Nor did his personal attorney, Jamie Gorelick.

Kushner’s aides have previously told the Times that he holds an interim security clearance, which Sean Bigley, a federal security clearance attorney at Bigley Ranish, LLC described to TPM as a “golden ticket” that provides government employees with “the full level of access” needed for an applicant to perform his or her role.

Kushner’s failure to disclose dozens of contacts with foreigners, including the CEO of a Russian state-owned bank and the Russian ambassador to the United States, have prompted Democrats to call for his interim clearance to be reviewed or pulled entirely. White House spokeswoman Sarah Huckabee Sanders on Tuesday dodged questions about whether Kushner still had it.

When the Times first broke the news of Kushner’s omissions in April, Gorelick told the newspaper that they were made in error. Kushner submitted his lengthy SF-86 form prematurely on Jan. 18, Gorelick said at the time, and his office informed the FBI the next day that he would be providing additional information about his foreign contacts.

Kushner’s team apparently spent the last few months compiling that additional information and has since submitted it. Eric Eisen, a veteran government security clearance attorney, said most applicants file one additional disclosure detailing any information they may have missed as they want to appear as forthcoming and thorough as possible.

Eisen and other lawyers who specialize in security clearance applications told TPM there is nothing unusual about supplying additional information, and noted that it can be subjective whether or not to include a specific interaction with a foreign national. But they said that it’s always better to err on the side of caution, and one former U.S. official pointed out that Kushner’s attendance at the Veselnitskaya meeting is exactly the kind of thing investigators would want to know about.

“The whole point is to understand whether there is something in your background that is either embarrassing or compromising in some way that means you cannot be trusted to hold state secrets,” said Derek Chollet, director of strategic planning on Obama’s National Security Council.

“Anything that you’re trying to keep secret or wouldn’t want out so [someone] could threaten you with blackmail, that’s basically what this is all about,” he continued.

What ultimately sways investigators’ decisions when considering supplemental information is whether that information was omitted accidentally or willfully concealed.

“The government usually in these cases will look at what would’ve been the outcome if we’d known that information,” Bigley told TPM. “If we’d known the information you failed to include, would that have changed the adjudicated outcome? The more serious the issue, the more they kind of view it with a skeptical eye on whether the intent was there or not.”

Kushner is sure to face questions about his omissions soon, from any number of questioners. Congressional investigators, the special counsel’s office, and, presumably, the investigator assigned to vet his final security clearance application all want to know about the exact nature and purpose of his contacts with Russian operatives.